I still vividly remember the promos on the pre-Syfy days of the Sci-Fi Channel for the finale of Mystery Science Theater 3000. I was 14 and taped every episode of the then-decade-old movie-riffing series. When I saw the promo and realized my favorite show was ending, I was crushed. Cut to 2016 when, miracle of miracles, creator Joel Hodgson wanted to bring it back. Fourteen episodes dropped in 2017, after a hugely successful Kickstarter. My dreams had been answered, as had the dreams of thousands more fans. Now, we live in a world where the show is back, up and running, and a new batch of six episodes will drop this Thanksgiving.We had the pleasure of visiting the set of MST3K‘s second revived season and spoke to creator Joel Hodgson and stars Jonah Ray and Hampton Yount (Crow T. Robot) about returning to the cultural icon set in the not-too-distant future. 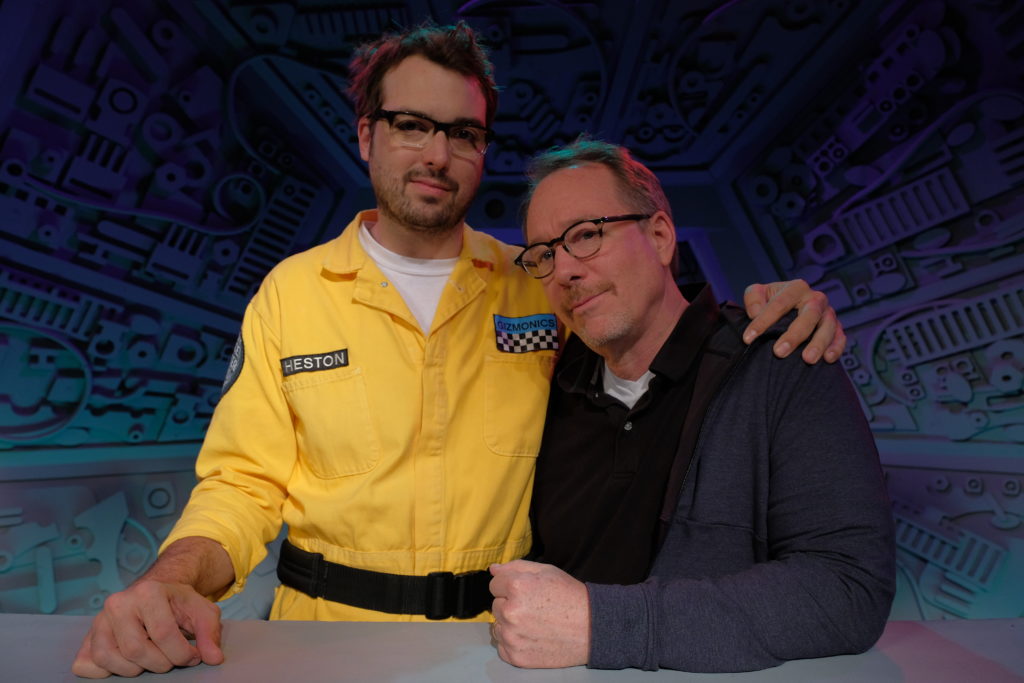 “It’s so much more fun now, so much easier,” Hodgson told us during one of his rare breaks on set. The subtitle of season 12 is “The Gauntlet,” and the meta narrative finds Jonah Heston, Crow, Servo, and Gypsy forced to do a six-movie riffing session, meant to evoke a Netflix binge. It’s a bit like that for the filming as well, plowing through all of the host segments for every episode in short order. But Hodgson loves it, because this season has become a machine.”I think it was hard the first time because it was kind of like, how do we land it all?” he explained of season 11. “Each element had a certain amount of anxiety because you just can’t control the outcome. And, you just really have to go with trusting the people that you asked to do stuff and hope that it turns out okay.”But it did turn out okay; better than expected, even. Hodgson says how proud he was that the 14 episodes resonated with critics and viewers, but more importantly the Kickstarter backers. “I was really, really thrilled with how it turned out. It was much easier to do it again this time. I spent a lot less time kind of explaining stuff to people and talking to people, and encouraging people. So, it was just way easier now. Now that we know how it looks and feels and that people are pretty much satisfied, where we can just keep doing it and just try to get improved.” 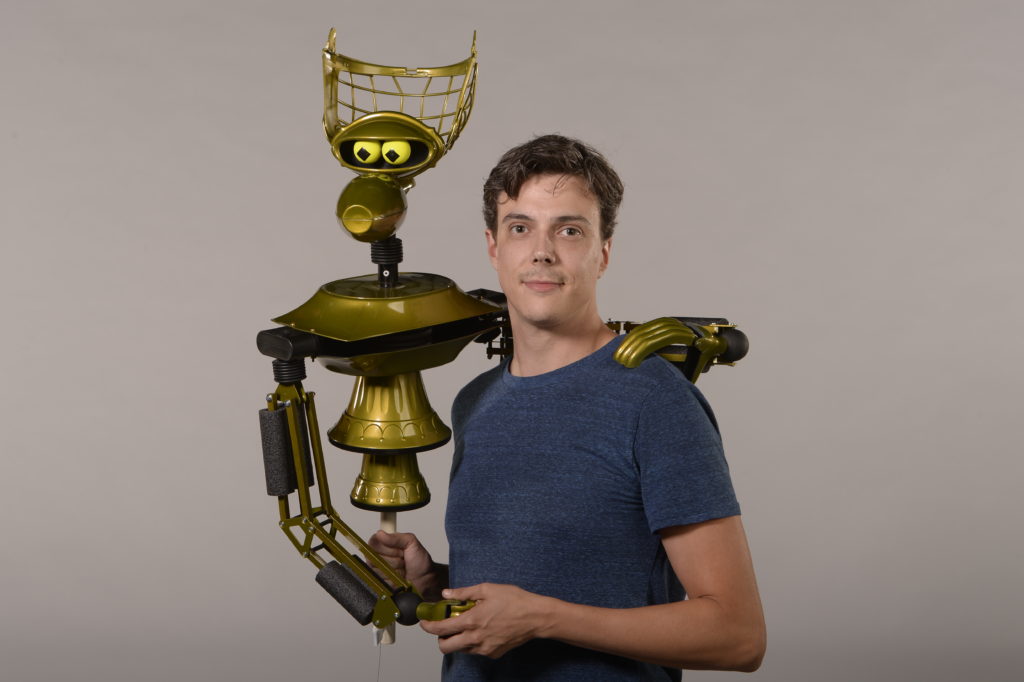 Ray praised the involvement of veteran comedy television writer and director Rob Schrab, who’s taken on co-directing duties for season 12. “He’s so full of energy, and he’s so funny. He’s got such a crazy visual eye. We kind of get excited they way he’s shooting stuff.” But even with the new blood behind the camera, Ray explained just how quick the shooting feels. “Still breakneck. It’s like, you know, did enough things in that take go right? There’re so many moving parts involved. Hampton or Baron (Vaughn, who plays Tom Servo) or I will be like, ‘Well, I don’t really like the way I said that thing,’ and the like. But If enough things go right, we move on. That’s the spirit of the show too, you know. If you…take too much time to make it, you might over bake it, you know?””There was definitely a difference of approach,” said Yount of the writing process this time out, “but still just keeping the basic elements of it together. We got together, got to write jokes, write at home and send them in, you know. Then when we go into the recording part, there’s a little bit more tweaking. It’s a little bit more hands on where it like, you know what jokes feel more natural, or how we should say them.” 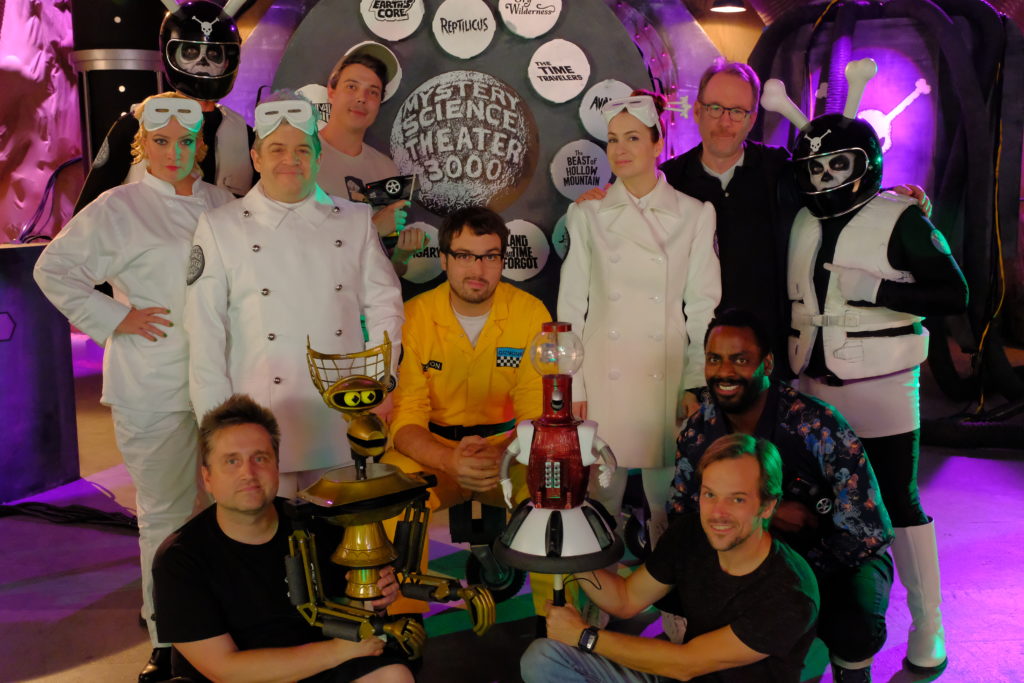 As with last season, the shows were recorded slightly differently than the way the original series was. First, the cast would record the audio of their riffs, then in separate filming sessions, Ray and the puppeteers would perform the silhouettes to the edited riff tracks, then finally all the host segments would be filmed. It seems slightly counterintuitive, but Yount explained he wouldn’t have it any other way.”We get so much feedback from when people are watching the silhouette shoots,” he said, “they really understand the jokes that are being set up for the sketches, because they really play off of what is being said in the theater. So, it also really helps the whole crew just get it. We like that they respond and laugh at stuff as we’re shooting. It lets us know what we’re doing right.”And yes, you read it correctly above: this new season of MST3K will only be six episodes, but according to Hodgson, it’s to keep fans fresh, and to let marathon watches happen much easier. “The first season of Stranger Things is like 500 or 600 minutes,” Hodgson explained. “The first Netflix season of Mystery Science Theater is like 1400 minutes. We created this enchanted forest that people were wandering into, but they weren’t wandering out of.”But with six episodes, the idea of embracing the binge-watch style works much easier. “It’s a lot clearer, here’s the beginning, here’s the end. You can see the finish line,” Hodgson continued. “I just feel like we really satisfied MST fans, but they’re used to lots and lots of MSTs and they want really a lot. When you think of nice normal people who might go, ‘What’s this weird show I’ve heard about?’ Now, I feel like we made it in a shape that newcomers can get to it and people who like the show, it’s the same format but it’s more breezy I think.”You’ll find out which six movies will join the Mystery Science Theater 3000 pantheon when “The Gauntlet” drops on Netflix on Thanksgiving, November 22.