Monsoon, starring Henry Golding as Kit, explores the feeling of displacement that occurs when refugees flee the dangers of their country and settle somewhere else only to return and feel a sense of alienation. Kit returns to Vietnam to find a meaningful place from their past to scatter his mother’s ashes. He’s also awaiting the arrival of his brother who is bringing his father’s ashes. Unfortunately most of what Kit remembers has changed. What ultimately occurs is a different kind of journey.

Many refugees who flee countries and have young children experience displacement. Especially the young children. As time passes, you become assimilated into the country you live. You pick up language, style and habits of the country. But you are constantly reminded that you are an outsider, no matter how much you assimilate.

It’s not only the cinematography that captures the isolation of displacement, but also Henry Golding’s stellar acting. It’s different from being a tourist—especially if you are a white tourist. You know there is going to be a feeling of separation. But when you visit the country you’re from and are treated in the same manner as the country you now reside in, the sorrow compounds. You don’t fit in, but how can you not feel connected when it is home?

Every visual highlights Kit’s emotional state. And the scenes are breathtaking in brilliant and sad ways. The use of wide shots that show Kit by himself amplifies his painful solitude and loneliness. Even when Kit is around people, such as his friend Lee, there’s loneliness. He tries to present them with gifts, but feels ridiculous because of the gifts he chose. In one moment, he brags that the water bottle he brought filters and cleans the tap water. It provides teeth-clenching discomfort.

Director Hong Khaou lets a lot of what is being felt play out in awkward silences to great effect. Whether it’s the silence between two people on the screen or Kit looking quietly into space, we feel his loss. He’s trying to connect with a homeland he mostly can’t recall, and reconcile that what once was is no more. 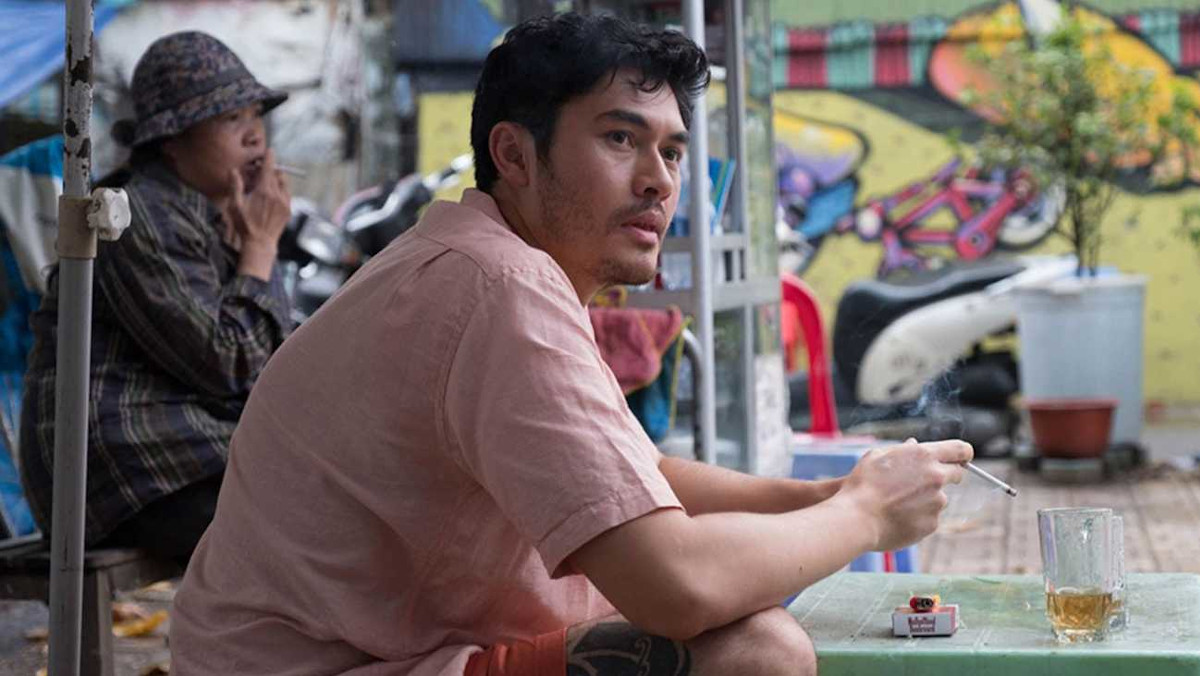 Monsoon also shows that, in a war, no one survives unscathed. When Kit meets a love interest, Lewis, whose father served in the Vietnam War, their history places them on opposite sides. They barely avoid an argument when Lewis says, “It’s not a war they can recall with pride.” Kit replies angrily, “Why would you want to?” However, they have affection for each other despite the history and their relationship.

Those moments where Kit feels bereft lessen as he connects with the people around him, feeling less and less like a tourist and outsider. He travels, meets with friends and lovers and slowly starts to see the beauty in what is now. As they lessen he appears more present in every shot rather than separate from what is around him. In the end is it a location that determines a home, or is it the people we love and cherish?

Monsoon is beautiful, dramatic in its subtlety, and wonderfully meaningful because of the diversity and the subject. It’s a joy to see Henry Golding in this role and hopefully we see more films in future that handle these kinds of difficult subjects with both beauty and authenticity.