Miniature Wargaming in the Philippines: The Makati Marauders - Nerdist

Miniature Wargaming in the Philippines: The Makati Marauders

We love showcasing fantastic community stories from gamers all over the world! From the mother and daughter who bake boardgame-inspired cakes to the woman who uses gaming as medical therapy, there’s so many great gamers and communities with stories to tell. Here’s one of them.

Amid the hustle and bustle of Metro Manila, there’s a group who engage regularly in friendly combat. It’s not the jeepney drivers making their way through the myriad of streets. It’s not the street vendors hawking their goods outside in the stifling heat.

It’s the Makati Marauders, a wargaming group based in the capital of the Philippines.

Several times a week the group throws down on the tabletop, with Warhammer 40,000, Warmachine/Hordes, and other Games Workshop and Privateer Press favorites being played. While heavy on the miniatures action, that’s not the only thing they play, according to Ian Ronneil Navarro, a veteran of the Philippines wargaming scene since 2000 who also serves as the group’s social media manager.

“Makati Marauders is a gaming club whose doors welcome miniature wargamers, boardgamers, RPG sessions, and CCG guys,” he said. “We have a good collection of board games that visitors can play and a variety of terrain that players can use for their wargames or enhance their RPG sessions.” 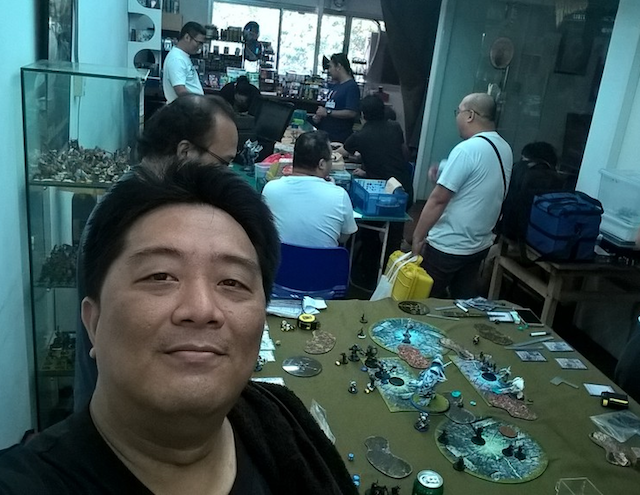 When he’s not working his I.T. day job, Navarro serves as a go-to contact for the many different gaming groups in Manila and the rest of the Philippines. While the Marauders game in their Makati club headquarters, Pinoy (the local colloquial term for Filipinos) wargamers also meet up at local game stores and cafes for their miniatures skirmishes and battles. Navarro realized that hobbyists were found throughout the country and that different gaming systems were used by each local crew.

“My goal was to be a common ground where crews can showcase their games, their talent, be able to discuss any game system openly, promote their events,” he said, “all with the basic common courtesy shown to all other players and crews.”

With that in mind, Navarro wanted to unify gamers throughout the Philippines and set an example for others involved in the hobby. He works with local groups who share goals of sportsmanship, painted models, and honest and open trading, and he promotes diversity and inclusion within the group.

“Although our standards are high (we are believers of playing fully painted), and we encourage it, we don’t impose it on everyone,” he said. “We recognize the different facets of the community and promote only the positive aspects. Our doors are open to a variety of games and game systems – board games from Lords of Waterdeep to Splendor to Go, RPGs from Dungeons & Dragons to Warhammer Fantasy Roleplay to Numenara, miniature wargames from Warhammer 40,000 to Warmachine/Hordes to Guild Ball to Gaslands.”

A typical week at the club includes Thursday and Friday night meetups and entire days of gaming on Saturdays. Some groups rent the entire place out for events such as tournaments and painting competitions, but most days players just show up to play games.

“We mix it up between miniature wargames, board games, and pen-and-paper RPGs,” Navarro said.

Although miniature wargaming is a niche hobby enjoyed by a small number of players in the Philippines, Navarro said they’re all passionate and active within the gaming scene. He uses the Marauders’ various social media accounts to promote and grow the hobby by showcasing local painters’ work, highlighting winners of local events, and promoting fair play.

And while Navarro primarily plays at the club’s Makati location, he still plays at game stores and game cafes in the area.

“I try to be a good example to gamers and hobbyists as best I can,” he said. “I’ve made a lot of very good friends from various walks of life in the gaming community and have learned many life lessons and good principles that have contributed to who I am now.”