Mazes & Minotaurs, the first officially published tabletop fantasy roleplaying game*, has made its core manuals available for free online in celebration of its 30th anniversary. Legrand Games Studio, publishers of Mazes & Minotaurs, has updated the core manuals, and released the 2017 Anniversary Edition for free through RPGNow.com and DriveThruRPG.com. 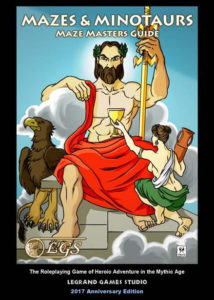 M&M belongs to an old-school retro genre of tabletop RPGs often called “swords & sandals” games, a reference to the settings that have inspired and influenced it. M&M’s ancient Greece setting was sparked by movies such as Jason and the Argonauts (1963), and Clash of the Titans (1981), movies that featured the marvelous stop motion animation of the great Ray Harryhausen. If those movies and settings appeal to your gaming senses, then M&M could be the RPG for you.

The M&M website has its previous editions available to download, along with a variety of other official M&M materials, including character record sheets, modules, maps, and all twelve editions of the Minotaur Quarterly, M&M’s official webzine.

*Before we go on, let’s recognize that everything before this point in the article isn’t exactly true. It’s all part of Mazes & Monsters known ‘hoax’ homage history. It wasn’t “the first roleplaying game ever published”, according to the M&M website. As a matter of fact, the true history of the game is described:

“The whole Mazes & Minotaurs concept was invented by Paul ‘Mithras’ Elliott in 2002, in an article called The Gygax-Arneson Tapes published on RPGnet , which can be found here. The story of how this article gave birth to a real, complete and 100% playable game can be found here.”

The Gygax-Arneson Tapes is a post on RPGNet.com under the Tempus Fugit: History for Games column, written by Paul “Mithras” Elliott, and posted on November 12, 2002. In it, Mithras imagines a conversation between Gary Gygax and Dave Arneson, where, instead of creating Dungeons & Dragons, they instead create the game Mazes & Minotaurs. 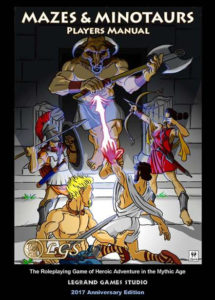 The post builds out the fictional Mazes & Monsters game further, by providing the setting and other important elements, such as “Haughty Greek nobles, the Trojan War, remote and magical islands, oared galleys, Greek Fire, the Oracle at Delphi, the Games, hoplite spear walls … and the monsters!” It also lists the available character classes, and mentions rules regarding weapon damage and sailing.

An enterprising game developer named Olivier Legrand read Mithras’ post, and thought, “What a wonderful idea… it would be so much fun if someone actually wrote this game…”. And so he did.

Legrand had a desire to challenge himself to write an RPG, and Mithras’ post challenged him in three ways: to write a game in English (which is not his native language), “Write a game with a genuine old-school, 1970s feel, reminiscent of early D&D”, and most importantly, “Write a game that would be totally coherent with Paul’s article”. 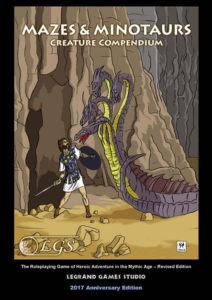 “And so I set myself to work, with Paul’s article as my One And Only reference to what the game should be.” Legrand took all the elements Mithras had listed about Mazes & Minotaurs, and had a working system with character creation and combat rules written within a few months. When it came time to add a magic system, Legrand turned to Mithras himself for help.

Legrand then found out that Mithras had created a Mazes & Minotaurs rule set already, based on “a « mythic Greece » version of Ian Livingstone’s and Steve Jackson’s famous Fighting Fantasy rules”. Mithras also sent Legrand a map to use as their collaboration continued over email, and hence was born the official Mazes & Minotaurs RPG.