Matt Reeves on the Magical Creation of TALES FROM THE LOOP

Adapting a popular series of paintings into a TV series sounds like a near impossible task. Add that to the fact that the paintings in question, Simon Stålenhag’s Tales from the Loop, are already a cultural phenomenon and it feels like Amazon’s new prestige anthology sci-fi series can’t possibly live up to the sum of its parts. But it does. In fact, the atmospheric, evocative, and intimate science fiction of Tales from the Loop has enamored critics, viewers, and—according to executive producer Matt Reeves—every creative and executive who has come in contact with it since its inception.

“It’s just been such an extraordinary path to how we ended up here,” Reeves told me when we chatted by phone. “It was actually my writing assistant Adam Sorin, who worked with me on The Batman, who first saw the images and he was like ‘Guys, you should look into these.’ I work with these guys at my company called 6th & Idaho—Adam Kassan and Rafi Crohn—and they’ve been with me for years. It was Rafi and Adam who were like, ‘Well, maybe we could see if we could get Fox 21—who we had a deal with—to buy us the rights to Simon’s book.'”

The unusual concept excited Reeves; he couldn’t quite imagine where the project might end up. “It’s just so unusual,” Reeves pondered. “But the pictures were so incredible so I just thought let’s do it!” Luckily their partner at Fox 21 saw the potential in the pictures, too.But it was only when the team met with writer Nathaniel Halpern that the story of Tales from the Loop truly began to come together. Reeves recalled, “Nathaniel was the first writer we met with. And we said, ‘Look, we don’t know what we’re doing with these, but we just love them.’ And we showed him the book, and he was captivated.”

Halpern quickly became involved with the project, talking to the original artist and finding an unexpected collaborative partner. “He had some conversations with Simon Stålenhag and they connected at a very deep level. It was very provocative and really personal. Simon grew up near CERN, the particle accelerator, and the paintings were all provoked by that idea of the mysteries of life kind of strewn in fields around him. It comes from his childhood, from this very personal place. Nathaniel connected to it in that same way. I’m not kidding when I tell you that Nathaniel came back in a week’s time and pitched the show that you see on Amazon,” Reeves said. 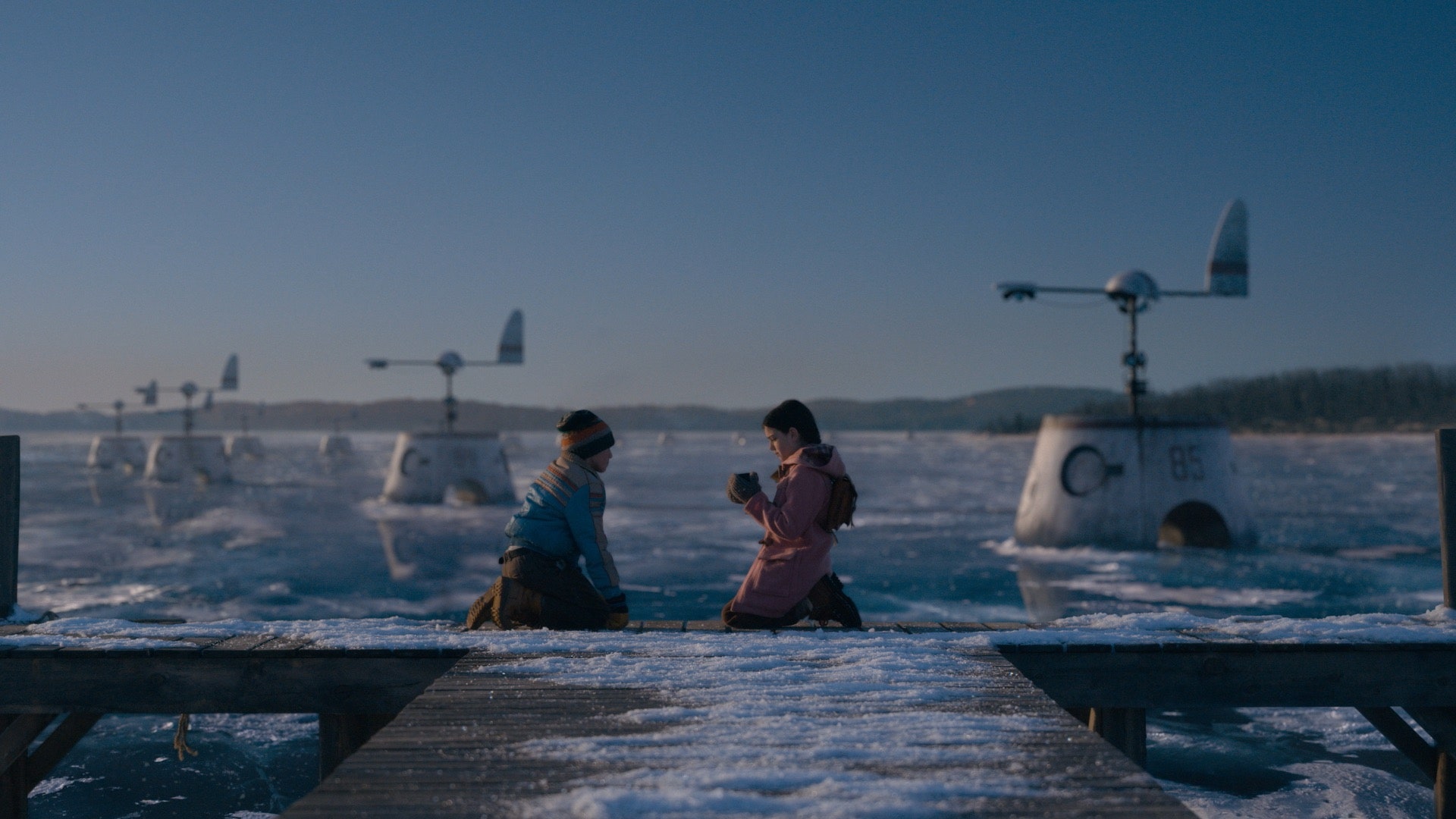 The idea that Halpern came up with “wasn’t quite an anthology” and “wasn’t quite serialized.” Instead it centered on one town and the people who lived in it. But it was a reference to a Sherwood Anderson story that really sold Reeves on the concept. Reeves said, “What he [Halpern] pitched was actually something that was akin to, he said, Winesburg, Ohio, which is one of my favorite books ever. And I was like, ‘Oh, that would be incredible.’ The idea is it would be a company town, you know, like Los Alamos or the Manhattan Project or CERN. But the scientific experiments that are the factory town’s business are about trying to unlock the mysteries of the universe.”

It’s a truly intriguing concept and one that the team brought to life in a completely enchanting way. The biggest twist on the entire concept is the lack of them—twists that is. Tales from the Loop always centers on the humans who live in the town rather than the mystery at the heart of it.

Reeves said, “Instead of the stories being, what I think is more traditionally done in a lot of sci fi—obviously Twilight Zone is in a similar vein, kind of trying to get at humanist stuff—but like, at the end of the day, there’ll be a big twist… That was the one thing Nathaniel did not want to do. He said, ‘What I think is interesting is using these images to explore mysteries that are metaphors for the human condition.’ The point of the human condition is a lot of these things are things that we’ll never come to the answers for. That just is existence, right? [It] is living in the unknowing.” 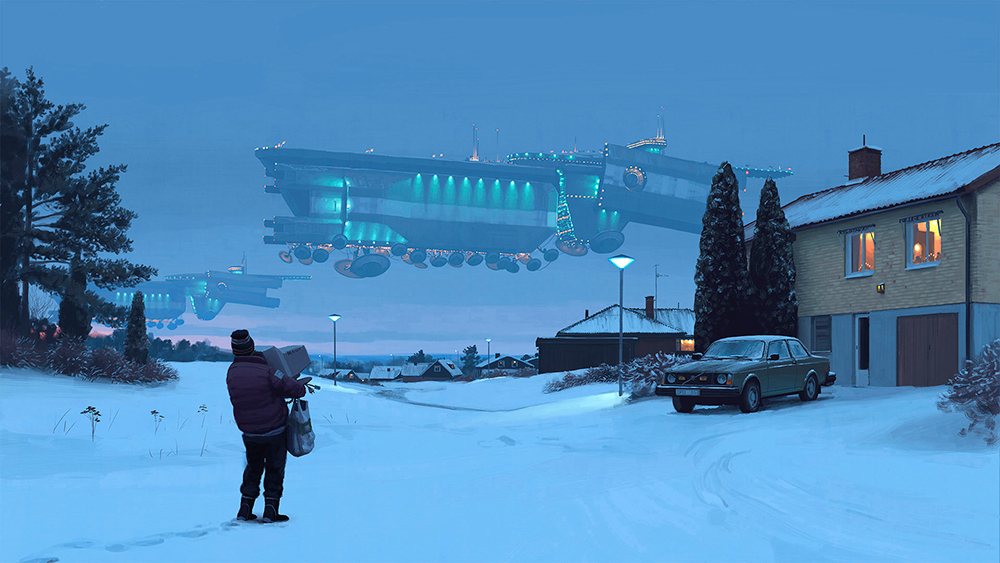 Reeves loved the concept, calling it “his favorite idea for a series ever.” So did Fox 21. “We were really fortunate that Fox 21 saw the value of that too,” Reeves said. “They said, ‘Hey, this is very special. Let’s just have you guys develop this internally with Nathaniel.’ Nathaniel worked on that pilot script for the first episode for almost two years.”

That dedication and time paid off when they met with Amazon. “We didn’t know at the end of all of this whether or not there would be a place that would embrace the kind of intimate, humanist storytelling as opposed to the sort of loud, traditional sci-fi genre. And they bought it in the room and we have been incredibly lucky and excited ever since then.”

The transcendent, almost magical, effect of Tales from the Loop didn’t end there. The show garnered an unbelievable cast and crew. They even secured one of the best living composers, Philip Glass, to craft the aural landscape. Reeves said, “So many incredibly talented filmmakers and actors were drawn to work on it. We took the script to Mark Romanek, and he elevated the project tremendously and put together this all-star team and then it snowballed from there. Mark was instrumental in delivering people like Jeff Cronenweth, Phil Messina and the incredible Philip Glass. We have Andrew Stanton, we have Jodie Foster… Then we have, you know, Jonathan Pryce and Rebecca Hall.”

You can stream Tales From the Loop on Amazon now.