Fingerless gloves, ranch dressing, and Russian nesting dolls: These are three things I have no use for in life and can happily live without. Yet one of these things is not like the other; one of those nouns actually forms the setting for a surprisingly fantastic little game. No, I’m not talking about Reiner Knizia’s auction game about gloves.

Matryoshka is a quaint design from Sérgio Halaban, designer of Sheriff of Nottingham. This card game was originally produced by European publisher White Goblin and is being brought to North America as a new entry in Terra Nova Games’ stable via the currently running Kickstarter campaign.

The trick with Matryoshka is all in the sales pitch. You toss the diminutive cardboard box on the table with that sadistic wooden Soviet woman staring up at the group, and at least one of your lame friends is going to nope out.

“I want to blow something up tonight”, says Jimmy.

You feel your blood temperature rise and begin to vocally challenge Jim-boy, but we don’t want to go there after that fateful midnight shouting match in 2013 where deceased grandparents and the Pepsi challenge were brought up.

Instead, you work the negotiation angle. While Matryoshka is a game about collecting sets of Russian nesting dolls, it’s really a game about brokering black market deals, exchanging threats, and raising your voice.

The goal is to collect cards featuring like-colored sets of the creepy inanimate objects, but the way you get there is the interesting part. Each turn you will be forced to set aside a portion of your hand to form your collection. These cards go face up on the table and will not be available to trade during the round. The cards you hold back are your currency and what you’ll use to hopefully grease the wheels of commerce and swindle your rivals.

The decision of what you place visible to the group bears strong strategic implications. It will tip your hand and show what you are trying to collect. Information is one of the key resources of the game and a more subtle element of the depth within. You can obfuscate some of that by keeping your treasured cards in your hand but if you get in a jam, you may be forced to trade a doll you were banking on.

This forced trade is a delicate process of deciding what to offer. The encouragement of discussion and negotiation during this phase gives way to promise of future trades and securing social capital. Collectors will occasionally feel slighted and blood–or more likely beer–will be spilled. 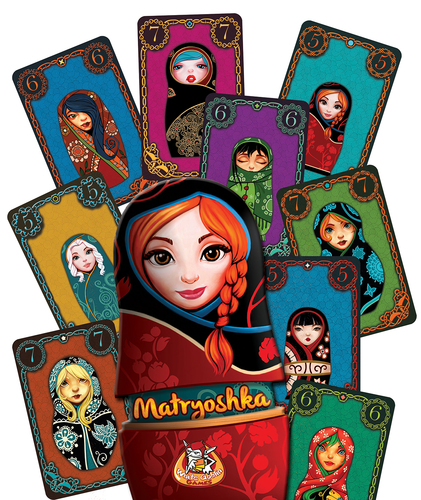 It is true that the game can occasionally be influenced by luck. Players draw additional cards to their hand during each of the four rounds, but that central element of trading is the mitigation. Additionally, the game chugs along at a brisk 20 minutes, never overstaying its welcome or feeling unpleasant.

There’s also a small annoyance in that the colors of the different suits of Matryoshka dolls can be hard to distinguish at times. The Terra Nova printing is an improvement on the White Goblin release, but some of the green and blue hues will have the activate player checking and re-checking possible trades as it’s difficult to remember the exact color of the face-down card you just looked at a second ago. It is nice to see embellishments on the illustration frames to support color-blind players.

But that imperfect color scheme is a small detail. Once you sit down and convince Jimmy to put his unreasonable objections aside, this game delivers beautifully. It produces tension and a surprising amount of drama as deals form and fall apart. Collections will slip through your fingers and you’ll end the game mentally working through the different ways you could have played. Who would have thought a game about cute (creepy) hollow dolls could be so intriguing?

The North American printing of Matryoshka is just finishing up its Kickstarter campaign which can be found here.

Have you checked out Matryoshka or happen to be a collector of nesting dolls? Let us know in the comments below!