Warp Your D&D Campaign Into the MASS EFFECT Galaxy - Nerdist

Warp Your D&D Campaign Into the MASS EFFECT Galaxy

I’m Commander Shepard, and this is my favorite 5e homebrew on the Citadel.

Fans of Mass Effect and Dungeons & Dragons will be overjoyed to see their worlds collide thanks to this homemade (also known as homebrewed) adaptation of the beloved BioWare franchise. Creators Luke Aeschleman and Hugh Thompson, alongside a team of contributors, have penned a guide to adapting your D&D campaign to Mass Effect complete with races, classes, feats, equipment, spells, and even themed character sheets—all for free.

“ Mass Effect 5e” is a free-to-download player’s manual that gives Galaxy Masters the tools to use D&D gameplay mechanics in a Mass Effect campaign and story. Players create characters, called operatives, based on the alien races and combat classes familiar to the role-playing video game. All your favorite aliens are there, from Asari to Human, even Geth to Hanar. (This one thinks it would be fun to speak like a Hanar all the time.) Then, just like fifth edition D&D, it’s time to pick a background and begin detailing your operative’s life story. 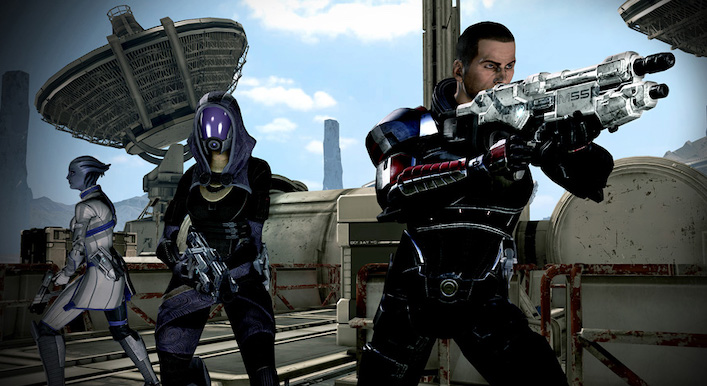 Operatives can be equipped with rifles and pistols, just like the combat you’re used to, along with the ever-handy Omni-Tool. And, of course, it wouldn’t be Mass Effect without staggering Biotic abilities, which the Player’s Manual also details for those classes.

The game can be set in either the Milky Way or Andromeda, and your story can take place before or after Commander Shepard’s final decisions. It’s your galaxy to create and explore.

Browse through the surprisingly robust “ Mass Effect 5e” Player’s Manual if you’re interested in taking your players through the mass relay. The project is always looking for additional contributors and playtesting feedback, so you might be surprised to find yourself happily stationed on the Citadel once again after all these years.

What kind of character would you create in a Mass Effect campaign? Tell us in the comments.