I’ve been playing tabletop roleplaying games off and on since I was a kid, both casually with friends and more recently in streaming games and podcasts. One of my favorite things to do is to introduce new folks to the table, so I was very excited when it was announced that Wizards of the Coast was partnering with parent company Hasbro to create an all-new version of the Dungeons & Dragons Starter Set designed as a tie-in to Stranger Things.

Even more exciting was the fact that it shipped out to customers a full month earlier than we expected. Always eager to get a game in, I decided to run a session of it myself and see just how solid of an introduction to D&D it really is. An excited crew of adventurers and I headed to our friendly local comic and game store, The Perky Nerd in Burbank, CA, and ran through a session of the set’s included quest “The Hunt for The Thessalhydra.” 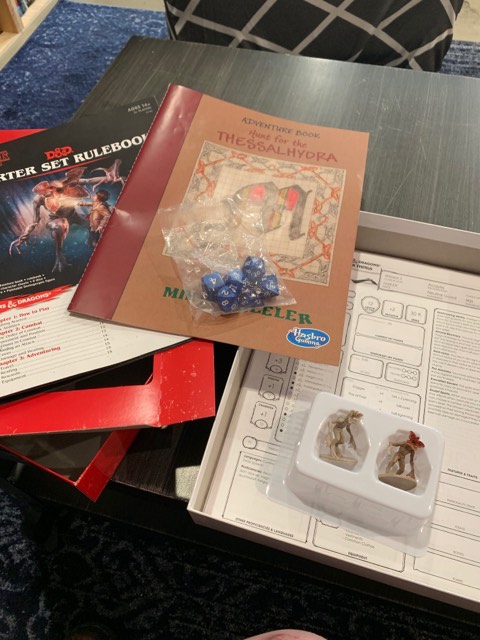 Knowing that this set was being targeted at beginners, we decided to try to run it as bare bones as possible. The goal was to experience it like a group of friends might if playing it for the first time, unsure of what to expect when unwrapping the box from its shrink wrap. The only prep I did was to make photocopies of the included character sheets so that my players could write on them, although you could replicate that with some notebook paper, and I made sure everyone had their own sets of dice, since the box only comes with one set, which could conceivably be shared if you’re a monster.

The thin rulebook includes descriptions of how the Fifth Edition (5e) of the famous roleplaying game is played, what the role of the Dungeon Master is, and some of the most common rules of the game. Notably missing was any descriptions on how to actually create your own characters if you’re so inclined. The clear objective is to cut through a lot of the prep that D&D games often require and get the game moving, using the pre-generated character sheets that come in the box. This actually makes a lot of sense. Making a character sheet can be one of the most time-consuming and intimidating things for new players. Jumping right in and learning how stats and abilities work first can give a clearer picture of how the game works and can be a good foundation for that same player when they do actually sit down with a blank sheet for the first time. 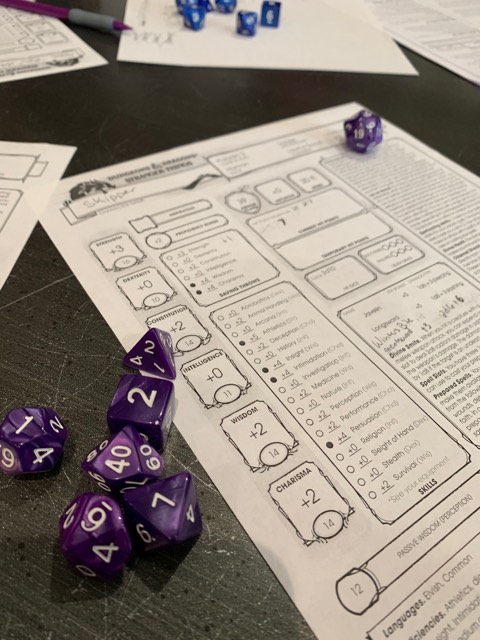 The “Thesselhydra” module has a little bit of everything one will find in a standard D&D game, which is exactly what you want out of a starter set, so players can decide what they like and know what to look for or design for future games.  It starts off immediately with some roleplaying before diving into a dungeon, complete with battles, traps, puzzles, and mind-bending mysteries. Fans of Stranger Things will notice quite a few nods to the show’s mythology. Admittedly, some of that stuff felt a little shoehorned in at times. I can see how it might make the game feel a little more familiar, but they also run the risk of pulling the group out of the reality of the game at times.

While the included adventure book opens by saying the quest could be completed in one night, it feels like at least two or three full sessions of play might be more likely for most. We had to speedrun through a few sections to complete it in a little over four hours. 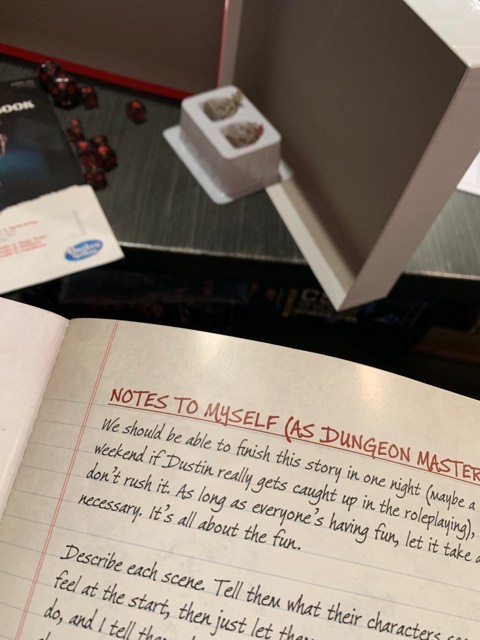 I think a first-time Dungeon Master might get overwhelmed fast with the “Hunt for the Thesselhydra” book. In what was likely an attempt to make the process feel more casual and relaxed, the adventure book is written in a first person perspective as if Mike Wheeler had made his own notes about the game he’s running for his friends on the show. It’s a strange place to stick so much in-universe flavor because it’s only being targeted to one member of the gaming group, and it can make things a bit confusing.

If you’ve never DM-ed before and are considering starting with the Stranger Things set, I definitely recommend reading the whole adventure book and the rulebook first to get an idea of what to expect to have to do during the game. You can play it right out of the box as I did, but I think you and your players will have a lot more fun if you take just a little bit of time to prep. 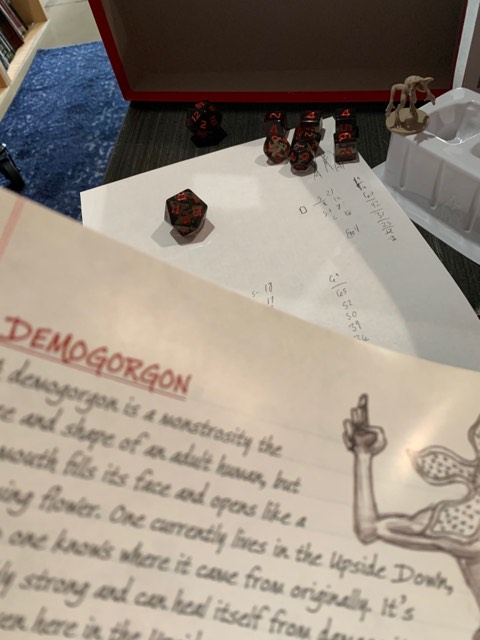 Having said that, there are some simple-to-operate puzzles that were a challenge for even some of the more experienced gamers in my group to solve, and I was impressed with how easy they were to run from just a few random dice rolls that generated obstacles. Ultimately, where the strength of this set lies is in its ability to demystify some of the elements of Dungeons & Dragons that make it feel inaccessible to people who have never played before but quickly feel old hat to those who have been playing even for a short time.