It’s so easy to love your companions in Mass Effect. Whether it’s because they flirt awkwardly or sing their own adaptions of Gilbert and Sullivan songs, they’re all endearing in their own ways. But while Mass Effect lets you effectively choose your own alignment, the alignment of your companions is generally outside your control. The only thing you effectively have control over is whether they live or die.

In your quest to (presumably) not let your companions perish, ever stop to think about where your friends really stand on the spectrum of Good and Evil or Lawful and Chaotic? Here’s a breakdown of all the companions available in the Mass Effect Trilogy and their D&D alignments. In case you haven’t played through all three games, take this as your warning: SPOILERS AHEAD! 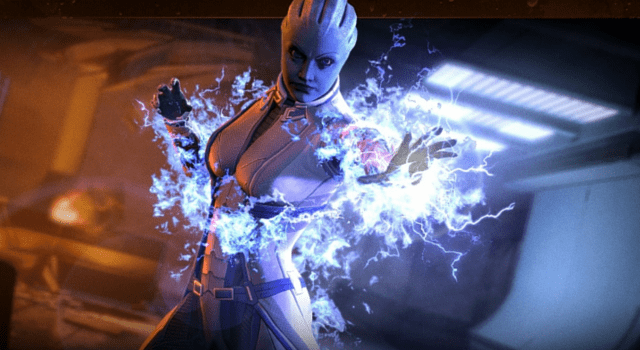 When you find Liara in the Prothean Ruins, she’s sheltered, naive, and a bit doe-eyed as a Lawful Good character. As her character evolves, particularly on Illium (where she’s hellbent on killing the Shadow Broker and any aligned with him) she’s easily slipped into Neutral Good. When she assumes the position of the Shadow Broker, she’s full on Chaotic Good. It’s hard to imagine Liara slipping out of her Good alignment, no matter the circumstance. 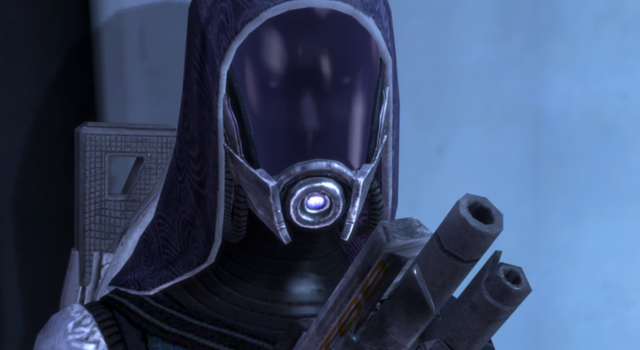 She’s Lawful Good, through and through. No matter what obstacles she’s faced, she doesn’t waver from the rules of her people or her strong moral compass that directs her to value life. 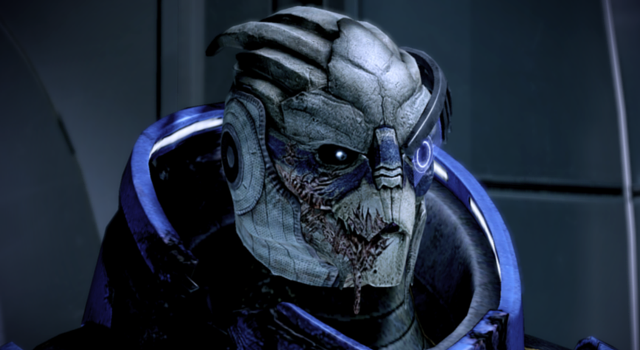 The Archangel himself, Joker describes the evolution of Garrus pretty poignantly: “I’m glad Garrus finally worked that stick out of his ass… But now he’s trying to beat people to death with it.” Starting (begrudgingly) as Lawful Good, he goes rogue and plants his flag firmly in Neutral Good territory. 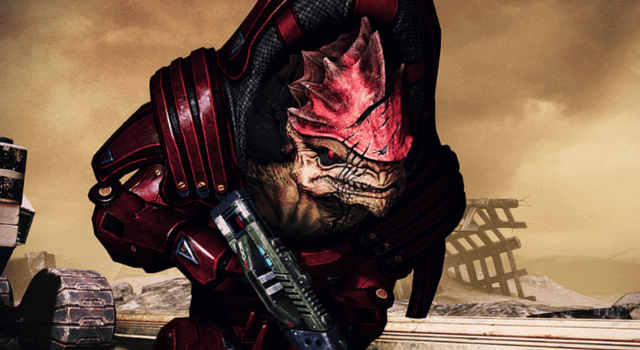 Wrex’s visionary ideal for the Krogan can be viewed as highly idealistic. He wants the Krogan to stop being a chaotic force in the galaxy and to elevate their society to match that of the Asari or Salarians in terms of science (and even arts). He’s noble, and he doesn’t view life casually. Urdnot is the paragon of what a Krogan who is Lawful Good would look like, trying to find order for his people amidst the chaos of the genophage. 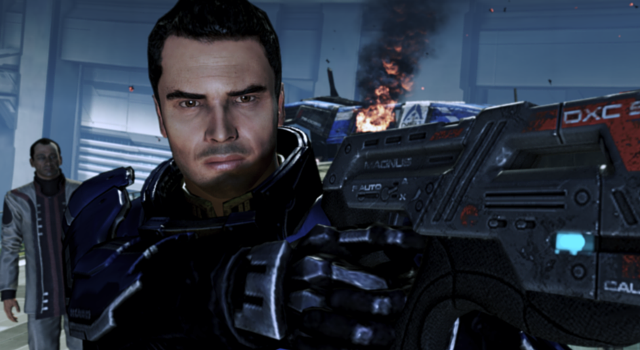 Another Lawful Good character, Kaiden’s trauma of accidentally killing a man in a moment of biotic fury has shaped and haunts him. He will forever value control and structure, as well as life. 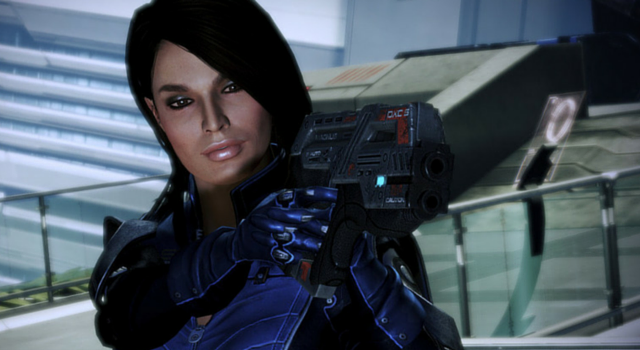 She’s a Lawful Good soldier (and a damn fine one) with a cause. Yes, she’s racist against non-humans, but she still values life and won’t take it unnecessarily. 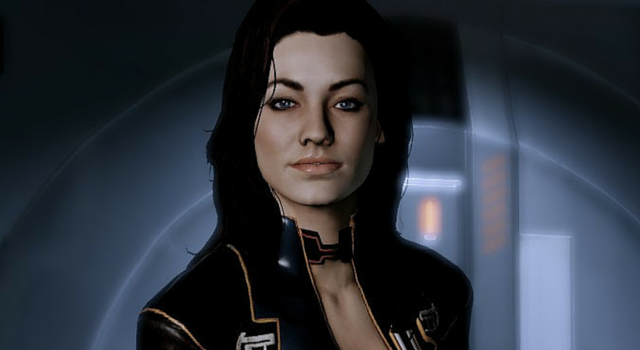 She’s Cerberus tried and true, and they’re true Neutral at the best of times. With that said, she has a purpose, cause, and guiding structure (Cerberus’) which makes her Lawful Neutral. 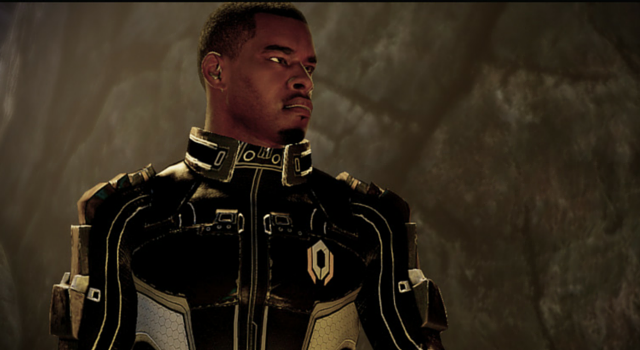 Another good soldier with a heart of gold (despite some daddy issues) Jacob, falls firmly in the Lawful Good camp. 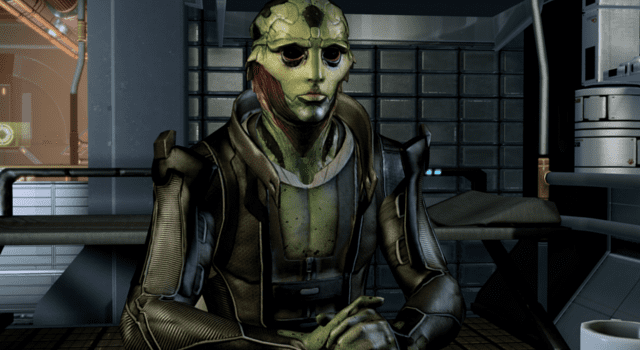 He’s Good, that’s for sure, but he also firmly believes in supplanting established criminal organizations, reaping chaos in the seedy underbelly of the universe. Thane is a Chaotic Good character undoubtedly. 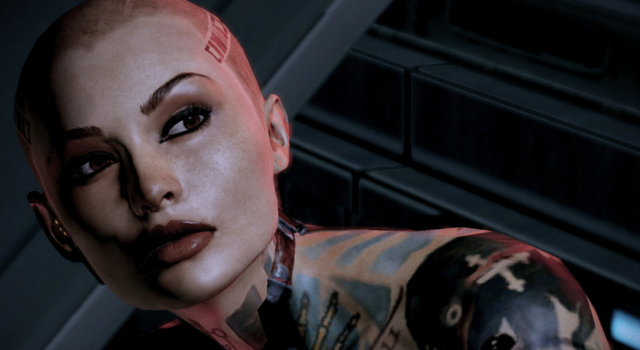 Self-centred and only motivated by her own desires and wants, Jack is the epitome of Chaotic Neutral. Were she more principled, she probably would have never agreed to work with Cerberus with Sheperd. Yes, she does tone down the profanity to be a teacher to the students she loves, but even in Mass Effect 3, the best we can call her is Chaotic Good. 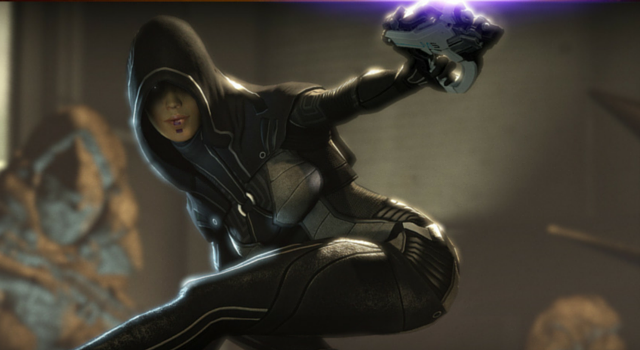 Who doesn’t love a happy-go-lucky thief, who steals for the joy and satisfaction of it (and the niceties of beautiful art and lots of money.) She’s Chaotic Neutral, but in a personable, lovely, endearing way. 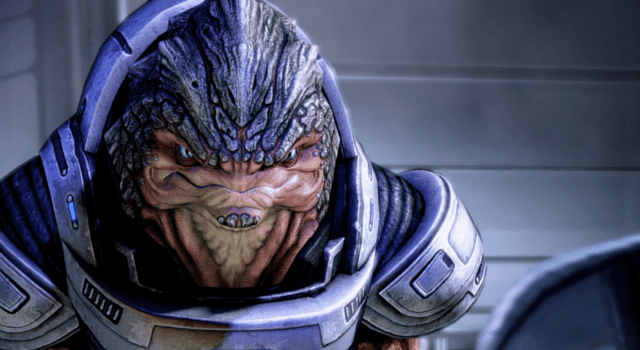 A tank-born Krogan with a want to satisfy what it means to be a true Krogan, Grunt finds solace in the ways of the Krogan, living their values and ideals. Depending on who his clanmaster is (Wrex or Wreav) his ideals change, but at his core, he’s still an adherent to Krogan ways, with a willingness to kill for money, cause, or no reason at all, making him Lawful Evil. 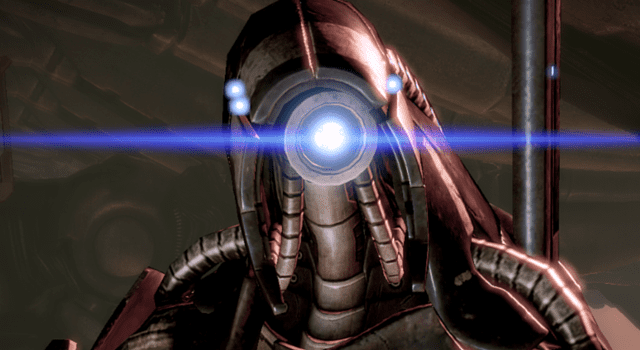 Building consensus across an AI-species who believes in self-determination for themselves and others is a fascinating one to break down. Because the Geth do not conform to the expectations or desires of the greater galactic community in terms of order, and their morality is made up of 1s and 0s, we’re categorizing the Geth and Legion by extension as True Neutral. 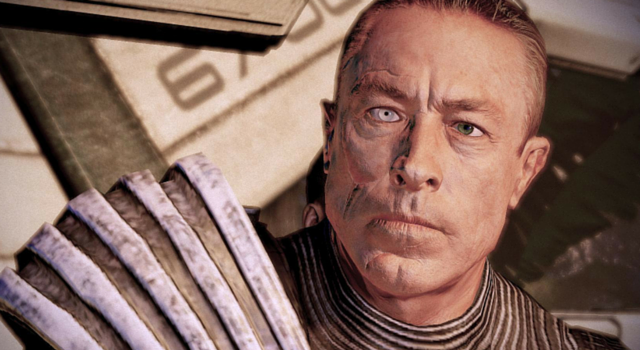 He’s so charmingly unpretentious, it’s easy to forget just how incredible a bounty hunter he is. He’s never been on the right side of the law, but he kills for money, not for pleasure. He’s True Neutral. 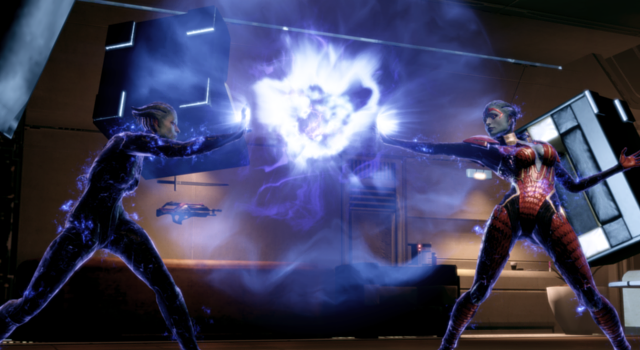 These two were the easiest to categorize since they’re so obvious in where they fall and diametrically opposite in their alignments. Samara is obviously Lawful Good, where Morinth is Chaotic Evil. 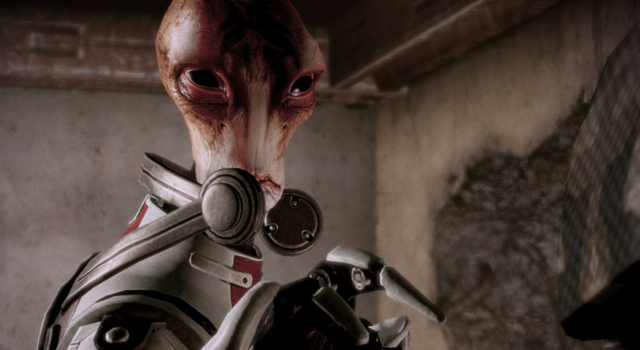 A man with a strong imperative for life and its diversity in the universe, his path is one where the ends justify the means, however hard they may be. He’s Neutral Good, since he’s willing to do the morally questionable thing. 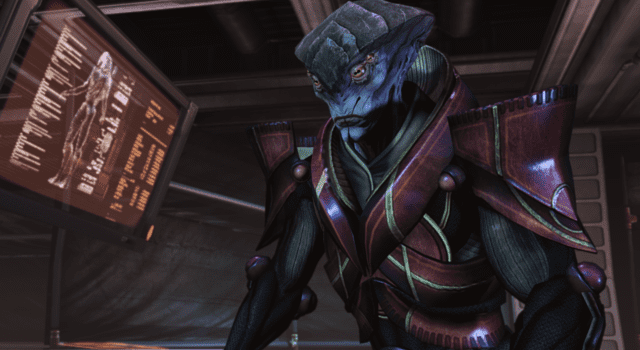 As the agent of vengeance for his people and with a disdain for primitive species that would make Ashley look like the Normandy’s committee chair for diversity, Javik’s inclination to war and adherence to the Prothean ways makes him Lawful Neutral. 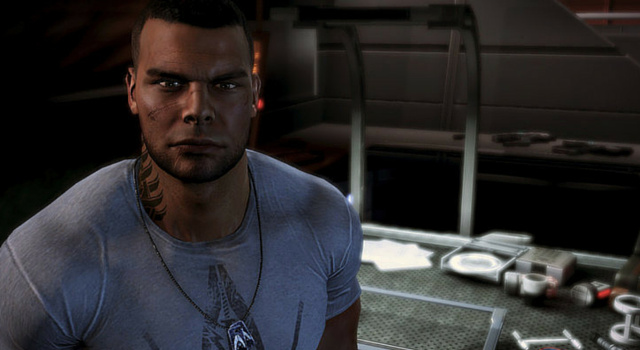 This handsome piece of man candy is a lot of things, if not a little naive. He’s got a mission, he loves Shepard, and is somewhat haunted by his past, having let innocents die to get intel. Having regretted choosing orders over innocents and his noted disdain for brass, he’s Neutral Good. 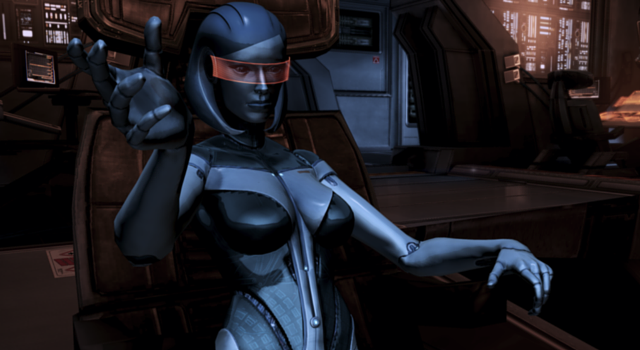 When you first encounter EDI, the AI of the Normandy, she’s bound by Cerberus’ structures as a Lawful Neutral entity. After liberating the Normandy from Cerberus, it’s clear EDI aligns herself to be complimentary to Joker. Further, she’s playfully antagonistic with the crew, sewing a little chaos as good-natured fun, making her Chaotic Good. 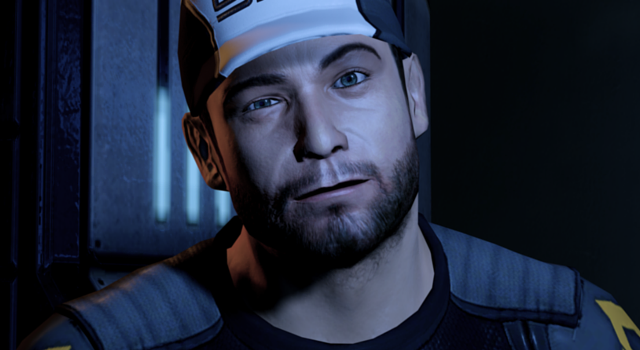 Loveable, charming ,and sarcastic, Joker is the embodiment of his namesake. He, like EDI, make a lovely ship pairing (both literally and figuratively), given that they both end up Chaotic Good.

What do you think? Disagree with any the alignments? Let us know who and why in the comments!

Teri Litorco is a YouTuber, past Geek & Sundry Vlogger, and an all-around and semi-professional fangirl and geek. She can be found strip mining the galaxy and eagerly awaiting Mass Effect Andromeda. Find her on Facebook,  Twitter and Instagram, and tell her who she should romance!