Everything You Need to Know About Shuma-Gorath - Nerdist

Everything You Need to Know About Shuma-Gorath

The wild world of What If…? brought one of our favorite Marvel monsters. While he’s never named, we’re about 99% sure that the creature Red Skull summons and Captain Carter takes down is Shuma-Gorath. It would make a lot of sense to introduce him here, as the creature is rumored to be appearing in Doctor Strange in the Multiverse of Madness. But what is Shuma-Gorath? Where did he debut? And what does his appearance mean for the MCU?

“A Cosmic Obscenity That Slumbers” 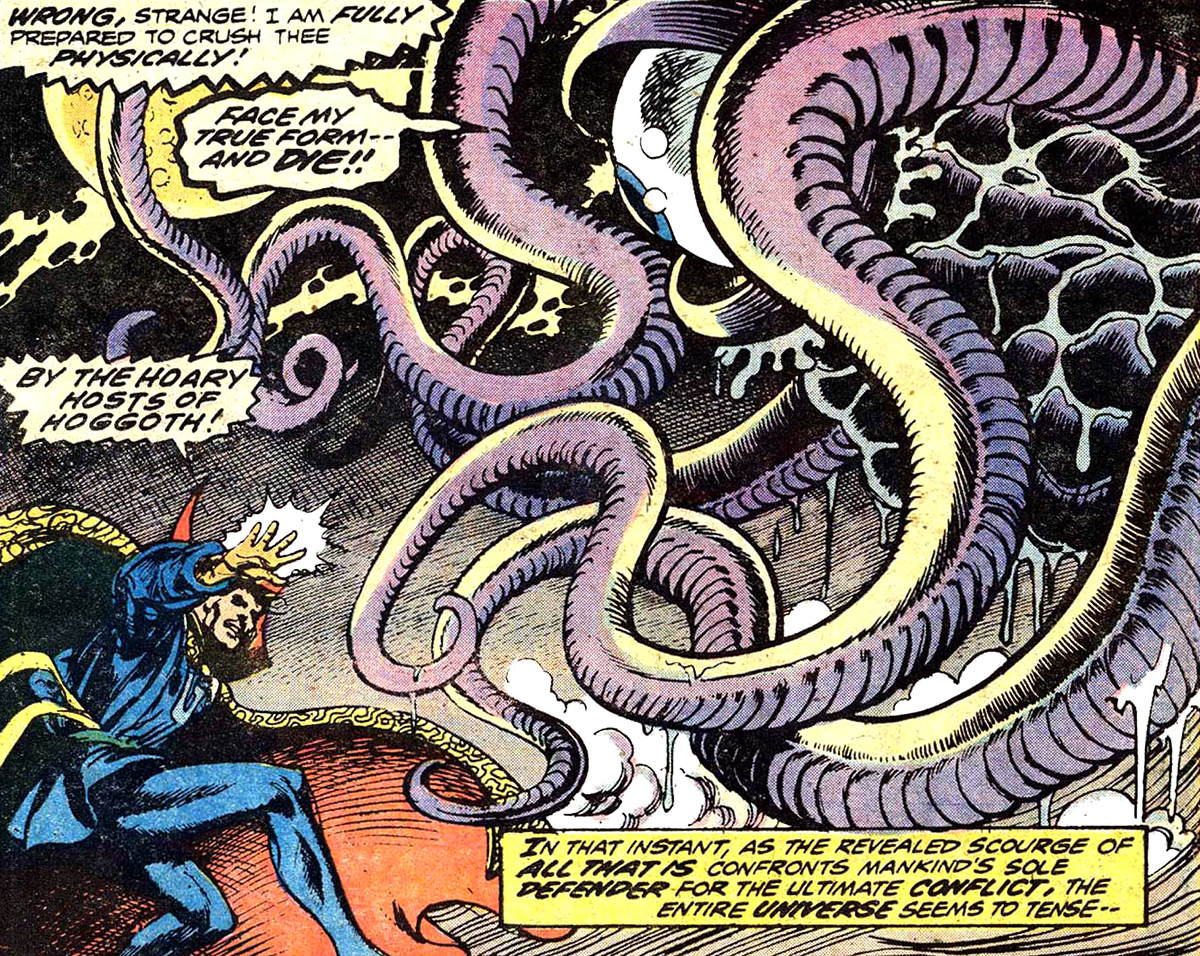 Due to his minimal comic book history, tracing the origins of Shuma-Gorath is enough to drive anyone mad, fitting for an ancient god of chaos. The phrase “the iron bound books of Shuma Gorath” appeared in a 1967 Robert E. Howard short story called The Curse of the Golden Skull. It was a quick aside and nothing more, merely a mention of a weird name. The being’s moniker seemingly seeped its way into Marvel Comics via Journey Into Mystery Vol. 2 #1 from 1972. In a horror tale that adapted a different Robert E. Howard story, scripter Roy Thomas subbed in the name Shuma-Gorath for different monsters originally mentioned by Howard.

Things truly began to take shape one year later. That was when Doctor Strange became the focus of the series Marvel Premiere. In issue #3, Stephen Strange is attacked by Nightmare, who claims to be forced to fight by an unnamed menace. “I swore to destroy you—so that he could take over the Earth,” proclaims Nightmare. In the next issue, the Ancient One warns Strange of “a cosmic obscenity that slumbers.” And in Marvel Premiere #5, the name Shuma-Gorath is finally uttered to the Sorcerer Supreme, who knows nothing of this ancient evil.

Shuma-Gorath Moves from Comics to Games

While the creature made a handful of appearances across the Marvel line in the late ’80s, it was in another medium that Shuma-Gorath would truly make his mark nearly a decade later. And it was all thanks to an unexpected request by gaming giants Capcom. In an interview for Polygon’s expansive (and brilliant!) oral history of Street Fighter, Dana Moreshead—former head of creative services at Marvel Entertainment—revealed how Shuma-Gorath came to be one of the inaugural characters in a beloved gaming series. “I still remember when we were talking about the Marvel Super Heroes game, they asked for Shuma-Gorath. It’s always interesting, because everybody is familiar with the Marvel mainstays, but when you’re in a meeting and somebody… on their list of the first asks, has Shuma-Gorath, [it’s a surprise].”

The Rise of Shuma-Gorath 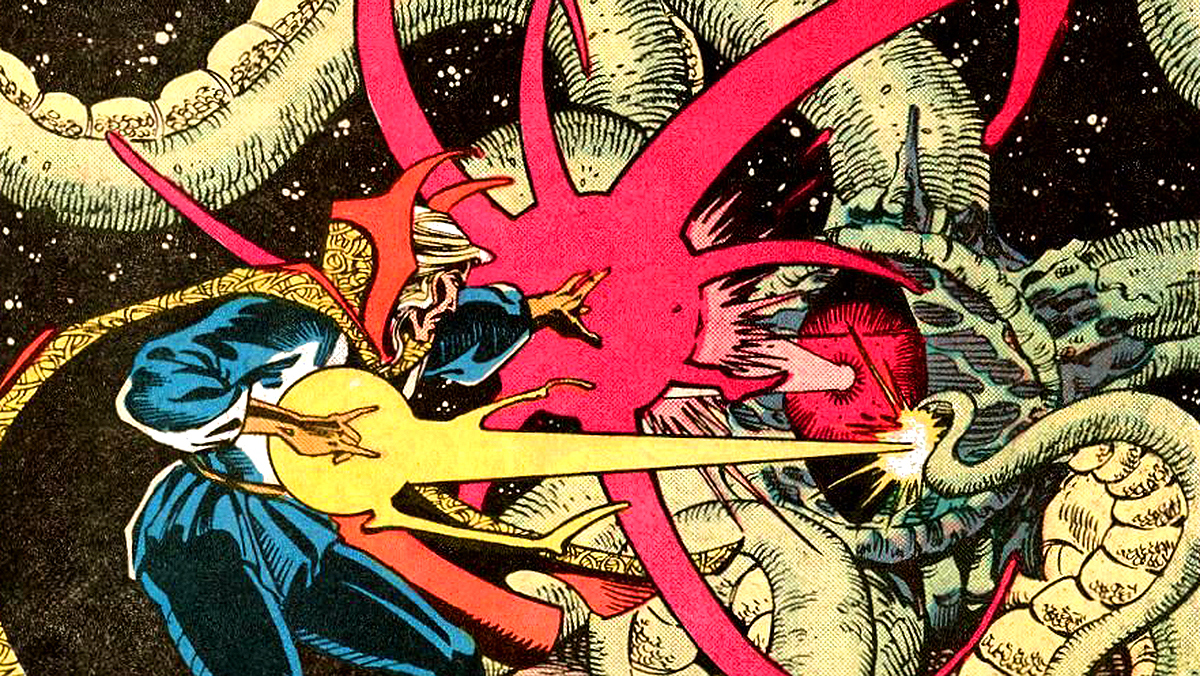 Though Marvel apparently wasn’t aware of the power of Shuma-Gorath, the Capcom team was right. Shuma-Gorath took on a life and fandom he’d never had in the comics as a playable character in the Marvel vs. Capcom series. Although his default color began as fuchsia—just as it was in Marvel Premiere #10’s colors by Cory Adams—the evil god forced players to “Embrace Chaos!” and switched to green starting with Marvel Super Heroes vs. Street Fighter. The change matched his late ’80s comic book appearances and seems to have stuck through the years, but what can Shuma-Gorath actually do? And what does he want?

The Esoteric Powers of Shuma-Gorath 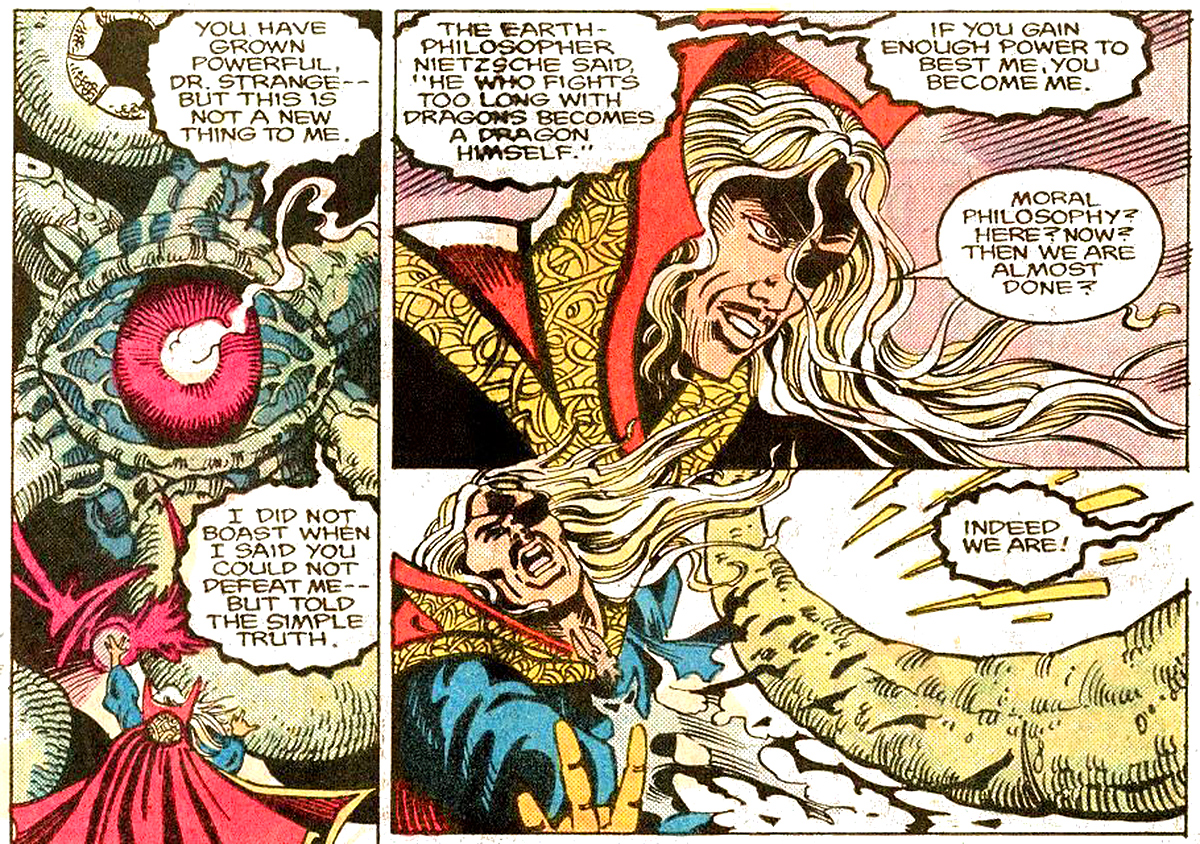 An ancient lord of chaos who’s existed since the beginning of time, Shuma-Gorath’s powers are varied and ranging. The phrase “His secret is his power. And his power is his secret.” is uttered often in his earliest appearances. The monster wishes to take over Earth, and claims that he must kill Doctor Strange to do so. Shuma-Gorath changes size, crushes with his massive tentacles, and shoots blasts from his enormous eye. The Capcom series imbued him with even more specific abilities, including spikes from his slimy skin, turning to stone, and devastating opponents with his Chaos Dimension hyper combo.

There’s seemingly no limit to the ancient and arcane abilities of Shuma-Gorath. He can traverse dimensions, grant immense power to others, and spout the philosophy of Nietzsche. What he can’t seem to do, however, is defeat Doctor Strange and take over the Earth. But while he might not have succeeded, that is what drives him. That’s particularly interesting with Doctor Strange and the Multiverse of Madness coming up. We’ve already seen Doctor Strange battle and beat one interdimensional being with Dormammu, and it looks like he’ll have to do it again with Shuma. In Strange Tales Vol. 2 #14, Shuma-Gorath faces down Strange in a battle of wills that sees him warn that, in fighting Shuma-Gorath, Strange will eventually become him. It’s the sort of existential war which MCU Stephen Strange often finds himself in, so we think that issue is definitely worth revisiting.

Shuma-Gorath was defeated by Captain Carter in her universe. But What If…? has been revealed as canon. So Shuma does now exist in the MCU. The only question is when and where we’ll see him causing chaos next…