Well, I’m sure glad I spent the morning researching the history of Marvel’s Weapon Plus. After tweeting a cryptic message full of in-universe redactions about Wolverine, Captain America, and Fantomex (see below) in the middle of the night, we were left to speculate on what new comic that would be. Well, merely 30 minutes after our story went up, Marvel shared the news: 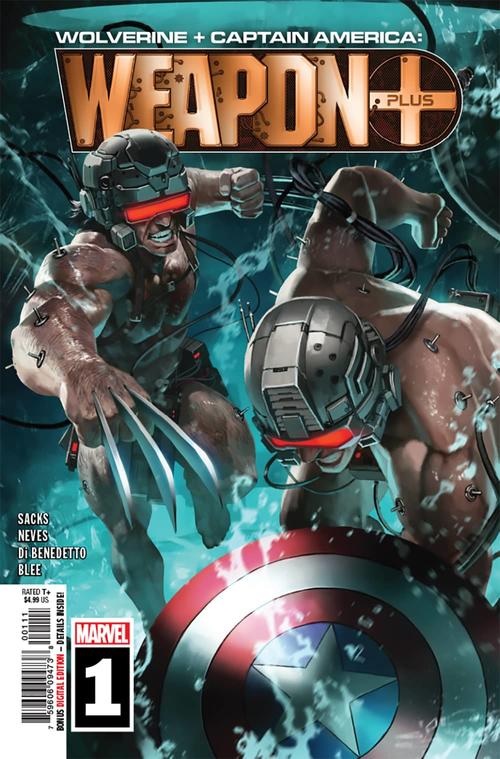 There will indeed be a team-up book featuring Captain America and Wolverine, Weapons I and X, respectively. Entitled Weapon Plus, the series from writer Ethan Sacks, artist Diogenes Neves, colorist Federico Blee, and inker Adriano Di Benedetto, will look at the shadowy connection between the stalwart hero and the slashy death-bringer. They’ll discover the truth about the super soldiers program which gave them both their powers.

The press brief doesn’t mention Fantomex, so we’ll surely get some more info on that down the road. But the first issue hits comic book stores on July 10. 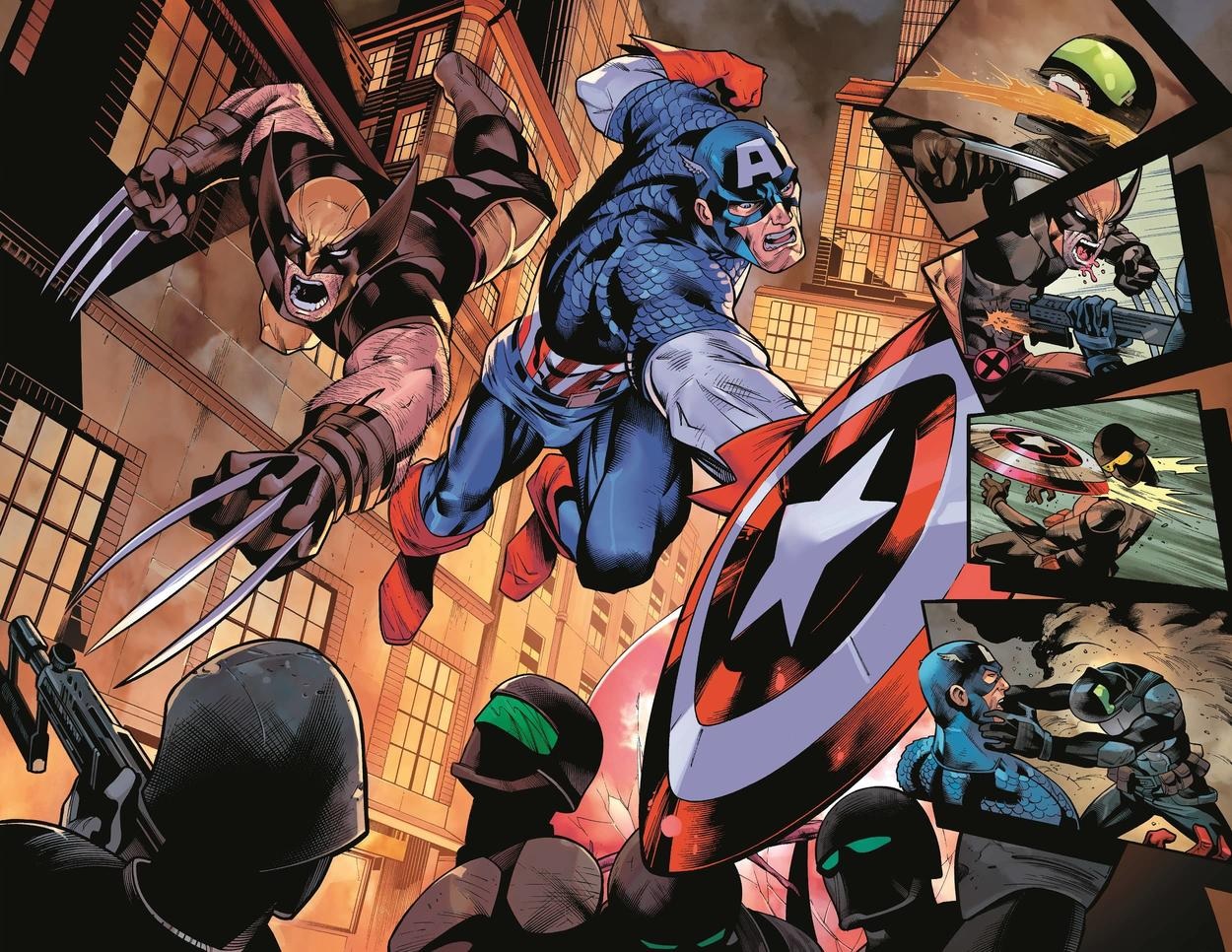 Original Post Below
I love a good viral marketing campaign. Ultimately, why would you ever need to just put out a press release when an in-universe bit of intrigue is so much more fun? At around midnight Pacific on Friday morning, the Marvel Twitter account tweeted a series of Roman numerals accompanied by an article with the headline “test/DO_NOT_PUBLISH-confidential-24569.” Naturally that seemed like it could be a mistake. Oops, some poor Marvel social media intern sure is gonna get a talking to! But if you click the link, you see it’s an elaborate bit of marketing for what we’re guessing is a new Weapon X comic that might feature both Captain America and Wolverine. Cool!

The article features a lot of HTML metadata as well as three heavily redacted dossiers. Redacted, but, like, not very well. It’s quickly apparent that this has to do with the Weapon Plus program, the retconned version of the Weapon X program (which gave Wolverine his adamantium skeleton and claws). Essentially, any character from Marvel Comics who at one point was meant to be a super soldier was actually part of the Weapon Plus program.

Let’s break down the dossiers first. The first of these is Weapon I, which refers to Steve Rogers, a.k.a. Captain America. 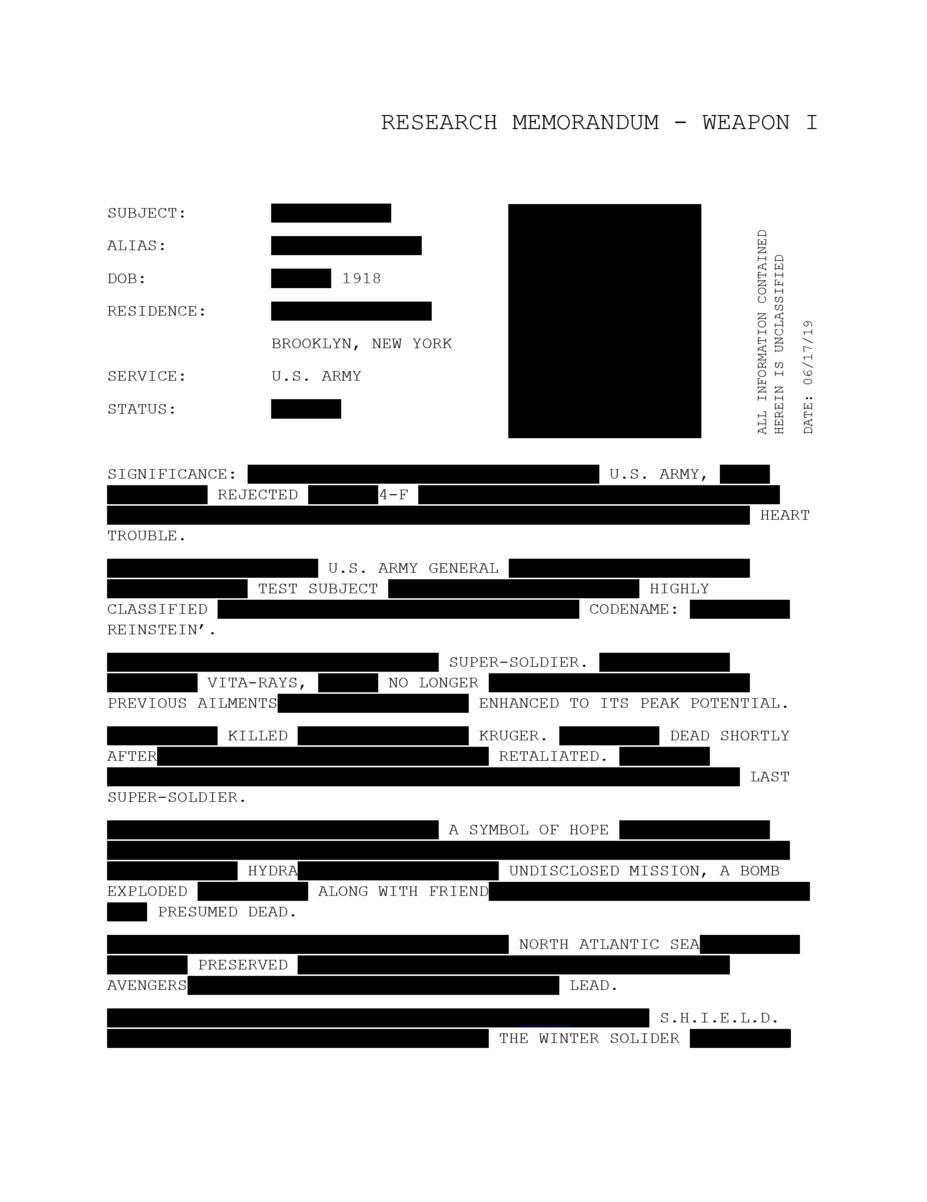 Really, what’s the point of redacting anything if you’re going to leave phrases like “The Winter Soldier,” “Symbol of hope,” and “North Atlantic Sea”?

Second is Weapon X, who is Wolverine. 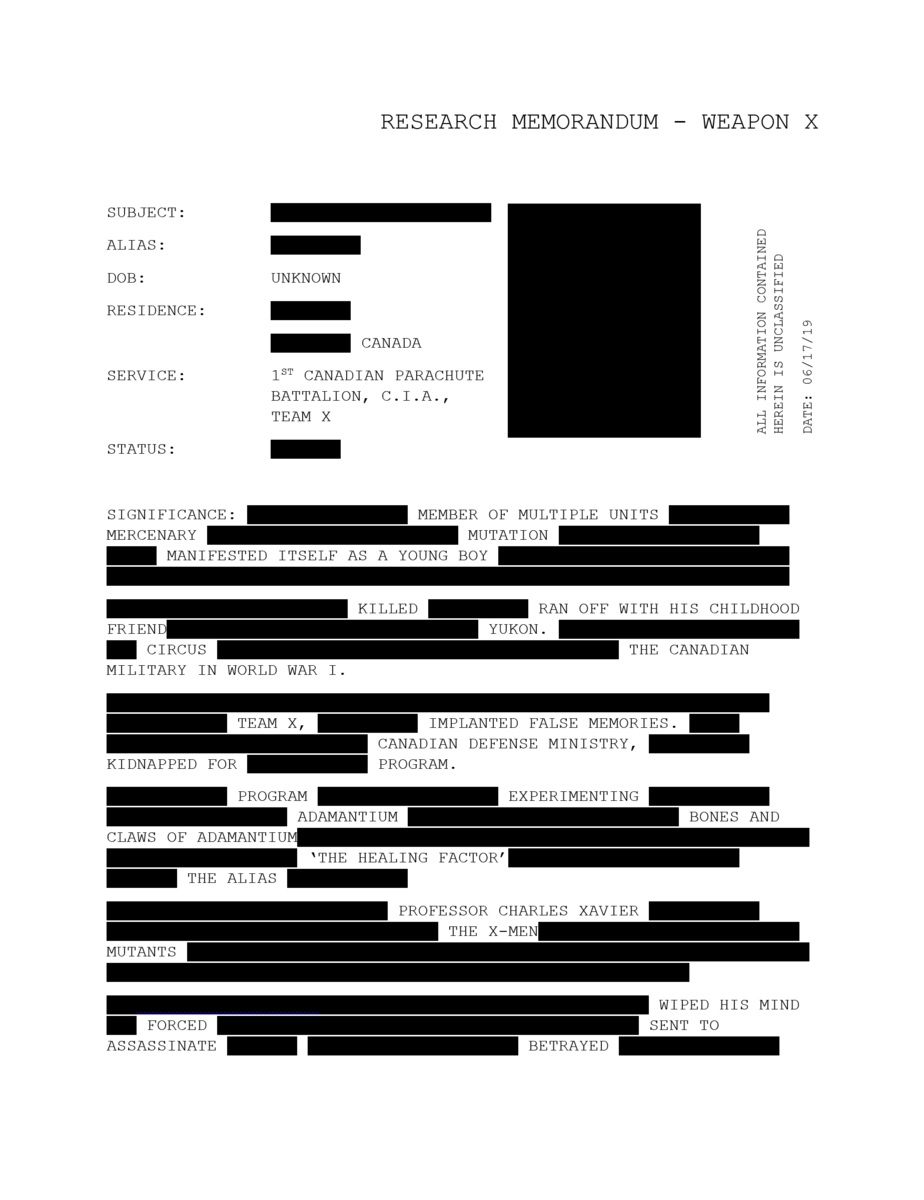 Again, it’s fairly easy to suss out. “Claws of Adamantium,” “‘The Healing Factor,'” and “Professor Charles Xavier.” Like, okay.

And finally we have Weapon XIII. 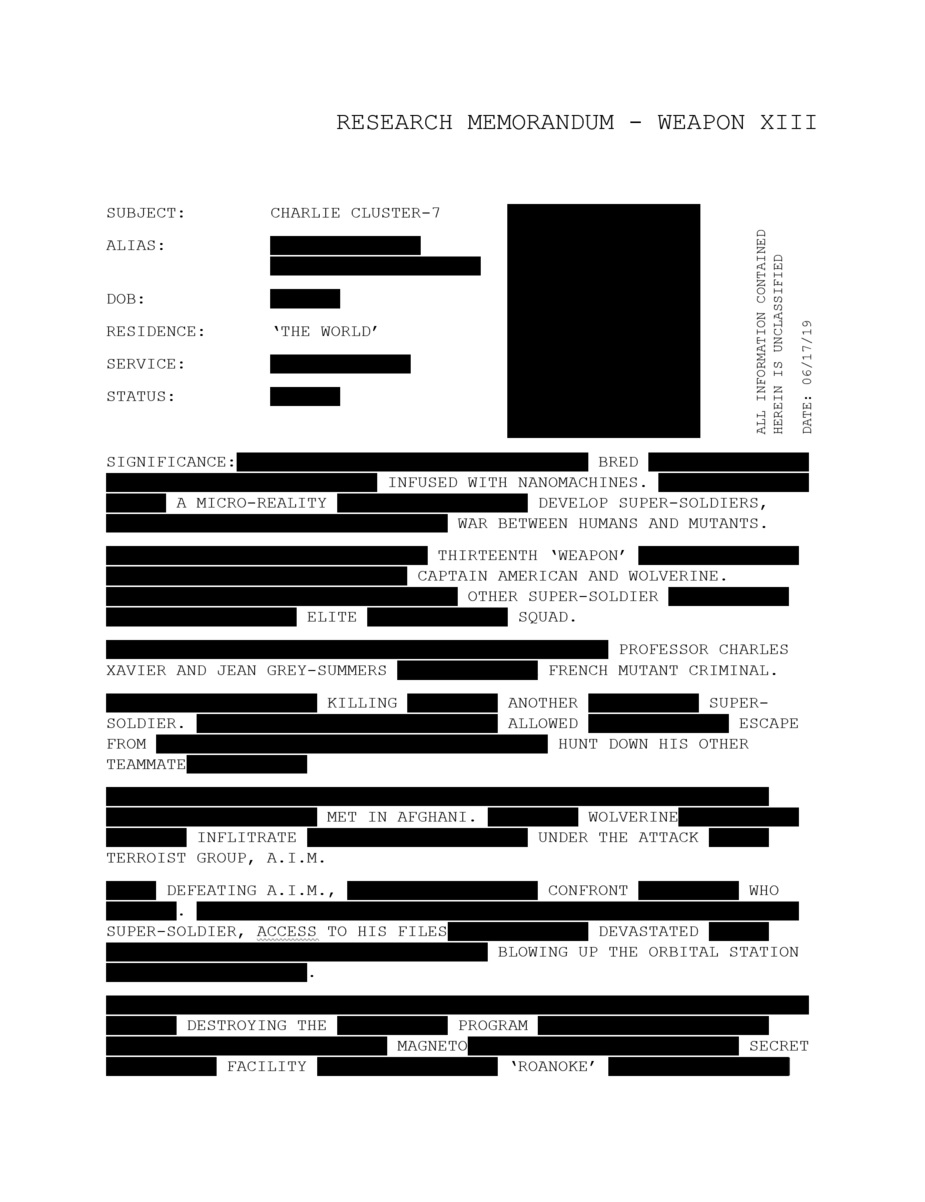 The subject name on the third one isn’t redacted. Charlie Cluster-7, otherwise known as Fantomex, was the result of Weapon Plus’ experiments with technological-human hybrids. A Frenchman, he first appeared in New X-Men #128. From his name and masked visage, he’s evidently writer Grant Morrison’s homage to Fantomas, the French pulp villain/anti-hero who would use gadgetry and murder to defeat his enemies. 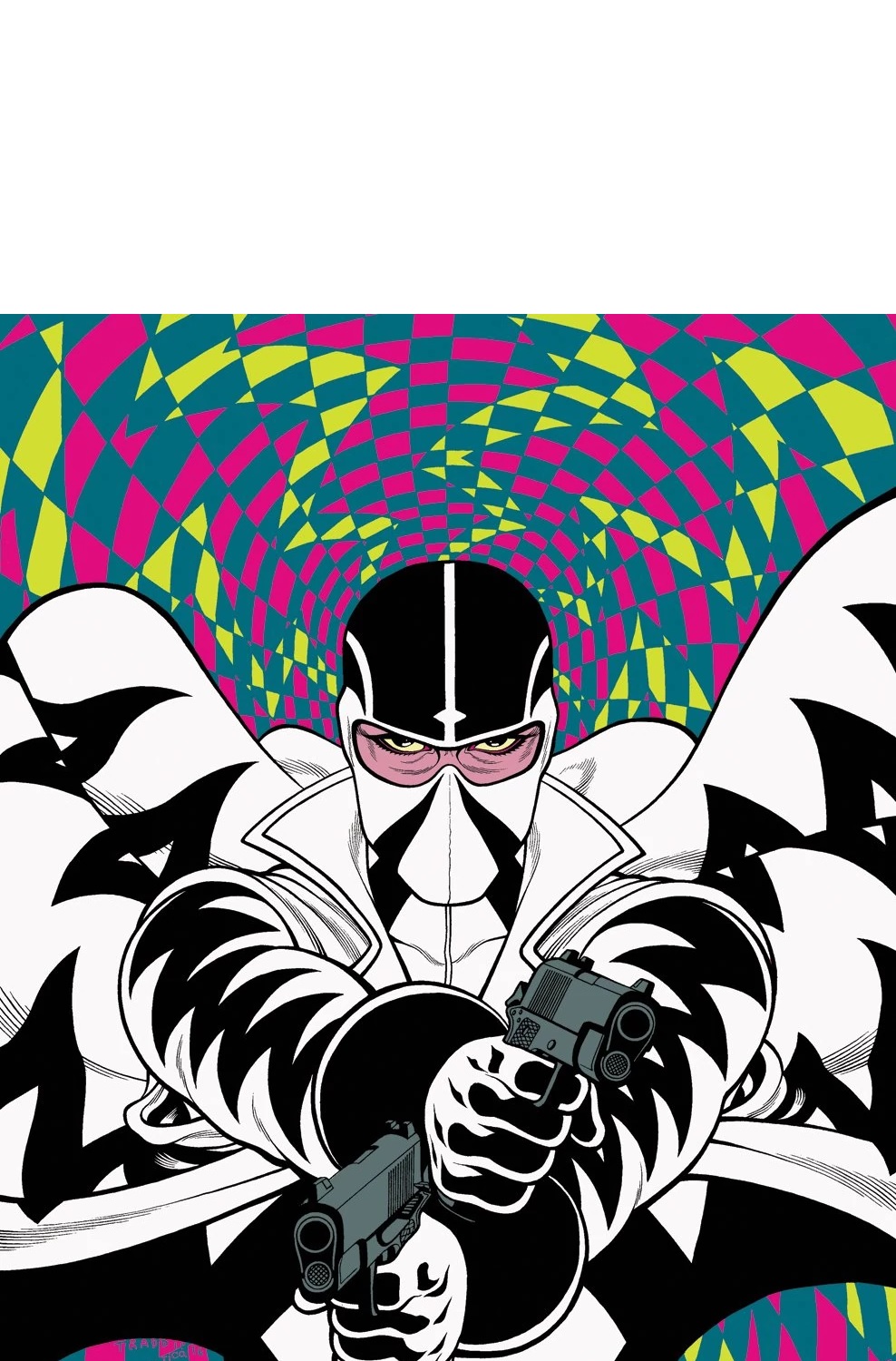 In addition to these three dossiers, the tweet also features the numerals II, IV, V, VI, and IX. These don’t apply to any specific characters, but more to different experiments and tests. Number II was animal testing, manifesting in a squirrel with adamantium claws. Numbers IV, V, and VI were tests on “different ethnic groups,” essentially the Tuskegee Experiments but with mutant powers. And Weapon IX dealt with drugs and hypnosis to trigger assassins/sleeper agents.

This is all very intriguing, and it says “All information contained herein is unclassified” and then has the date 06/17/2019. So on Monday we’ll learn the truth, but I’m guessing this is the lead-in event to Jonathan Hickman’s upcoming full X-Men relaunch, “Age of X.” Which is great! People have been stoked about more X-Men of late, and Dark Phoenix really didn’t satiate that thirst.