There’s never really been a top-shelf Marvel game. Upper Deck’s Legendary has its moments, but it struggles to convey a coherent narrative that empowers players. Fantasy Flight released Marvel Heroes in 2006, a design that’s all but forgotten, and it was interesting but far too abstract and detached. Sure, there’s HeroClix, but that’s an entire sub-culture of gaming with its own quirks and challenges. “Someday…” I’ve always told myself while resorting to other games with other settings.

Marvel Strike Teams from Wizkids came out of nowhere. This unheralded release is from designer Andrew Parks (Attack Wing, Dungeon Alliance), and it’s a fist to the jaw.

This is an interesting title in that it’s part dungeon crawl part skirmish game. One group of players take on the roles of heroes like Iron Man, Quake, and Captain America, while another fields henchmen and goons in the employ of Hydra. Baron Strucker is the main antagonist with Winter Soldier and Radioactive Man serving as lieutenants. 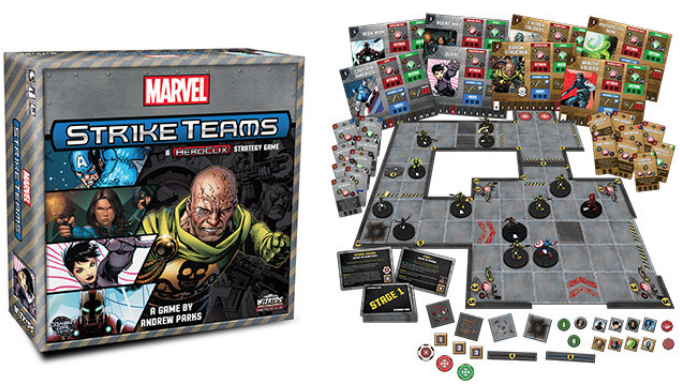 The strength of this release is empowerment. It captures the large shifts in momentum and explosions of force that’s native to the genre. It accomplishes this by utilizing an action point system similar to the popular Conan board game from Monolith.

Each asymmetric character accrues action points each round. You will spend these attack or defend, as well as fire off unique abilities across a spread of character-specific cards. These cards are the key element in achieving accurate representation of iconic powers. Iron Man can jet around the table with his boosters or vaporize a goon with his unibeam. He’s also incredibly tough and able to absorb a great deal of punishment. Cap can throw his shield and bounce it off multiple targets or wield it for cover and massive defense. Quake can deftly dodge blows and send seismic blasts rippling across the battlefield. It’s all incredibly satisfying and a major thrill.

All of this comes at a cost. Since it’s easy to plow through your action points and spend more than you gain each round, the tempo has a solid ebb and flow to it. You will have enormous bursts and then maybe play it safe and just move a few spaces. The enemy, of course, follows a similar pattern, requiring shrewd tactical decisions and an ability to adapt to an ever-changing environment.

In addition to providing soft tissue for you to batter, the game presents a compelling playground for you to wreak havoc within. There are barrels and crates that provide cover, turrets for you to hop into and fire, even ammo containers that can cause deadly explosions and harm those nearby. All of this is destructible. You can slam foes through walls and some characters can even hurl objects across the room. There’s a sense of creativity that permeates the carnage which is addictive.

Bolstering this rock-solid core is the wonderful scenario system. Each time you sit down to play you will randomly generate a scenario from a set of procedures. This includes one of many map variations and three unique stages of objectives. The slamming together of different characters with randomized goals and environments is simply magnificent.

This is not a game that hits you with flavor text or narrative passages, rather it’s a design of emergent storytelling where players forge a tale that’s uniquely their own.

Let me explain: a recent play saw Iron Man and Quake assaulting a Hydra base. They laid waste to the entrance, felling hydra guards and tangling with Winter Soldier in a deadly bout. This served as a craft diversion as an imprisoned alien being was being held near the rear of the stronghold. The alien would break free and escape, Hydra none the wiser.

That was just stage one, a random card from a random pool. Stage two revealed Quake and Stark had a bit of a thing going on. Bloodshed and destruction would not get in the way of their love as they fought ferociously and protected each other. For those watching at home and musing on possibilities – this objective could have resulted in a homosexual angle if say Iron Man and Cap or Quake and Black Widow were the ones on the mission. That’s a pretty progressive angle and one I find impressive for the game to lightly approach. It’s also handled in a lighthearted and abstract way, never appearing heavy-handed. 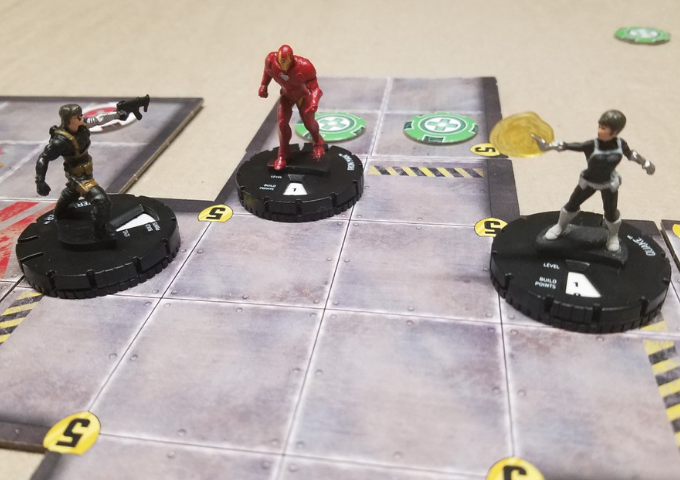 But back to Hydra base and my flailing ineptitude as the villain. After protecting each other for several rounds and updating their relationship status on Facebook, Quake and Iron Man were ordered to extract and make their way back to the entrance.

These three random narrative elements coalesced in a way that was coherent and delightful. This was not a perfect storm or unusual outcome, each of my subsequent plays followed a similar pattern with their own unique stories and quirks. It’s spectacular.

Riding tandem with this scenario system is the light campaign framework. You gain experience from the victory points you earn during play, using them to level up your heroes and villains with an eye on the long term. This allows you to bring additional cards from your pool into subsequent missions and enhances that preternatural feel.

There’s quite a bit going on in this game making it a difficult one to properly discuss. There are a couple of shortcomings of varying significance such as the bland visuals on the tiles particularly. The physical presentation as a whole is very average and not quite as inspiring as the design. It also oddly couples the game to the HeroClix line with a statement on the box cover, but this is in no way compatible or similar to its predecessor.

The damage system is a mixed bag as well. On one hand, it’s very clever, allowing you to assign wounds to different abilities. This lowers your effectiveness but it offers a thoughtful decision and a fresh tactical aspect. Unfortunately, this can lead to a downward spiral of ineffectiveness with lost turns and diminished agency. The victory point incentive structure wants you to focus on other targets once you’ve KO’d a character, so this is partially alleviated over the course of play.

I’m also a bit perplexed by the selection of characters. Iron Man and Captain America are obviously appreciated, but Quake and Agent May are odd ducks. I know this is based on the comics and not on the MCU, but it would have been nice to have seen less C-list options in the initial assortment. 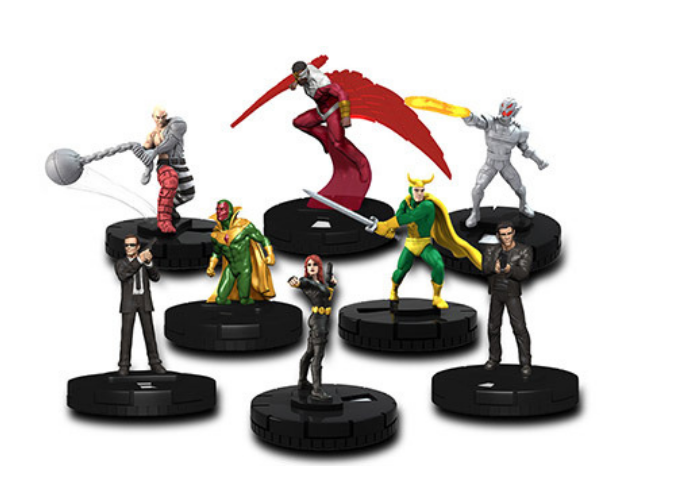 Thankfully there’s an expansion that arrived at launch expanding the selection quite well. Vision, Black Widow, Loki, and Ultron all storm onto the scene with spectacular powers and unique play. This Avengers Initiative expansion offers a clue as to the future content direction of this game and the doors feel wide open.

It’s rather obvious that this game is something special. There’s a similar feel in both systems as well as excitement to TMNT: Shadows of the Past, another design which absolutely surprised and floored me upon its release. Marvel Strike Teams is by no means a perfect design, but its imperfections don’t blunt its audacity and emboldened execution.

Have you played Marvel Strike Teams? Let us know in the comments!  And be sure to join host Becca Scott on  Game the Game every Thursday here on Geek & Sundry to watch the best boardgames played with fantastic guests!