Everybody loves a Venn diagram. Or at least people who like easily readable depictions of things falling in to categories. How else would we know thatâ€”when talking about people who are breaking my heart and shaking my confidence dailyâ€” only Cecilia bridges the gap? But even more helpful have been the diagrams detailing the complicated rights issues surrounding Marvel Comics characters, their varying cinematic universes, and studios. Following Disney buying 20th Century Fox (which, yes, hasn’t been officially allowed yet), the rights issue became much clearer, but still not cut and dry in some areas, as this updated infographic shows. 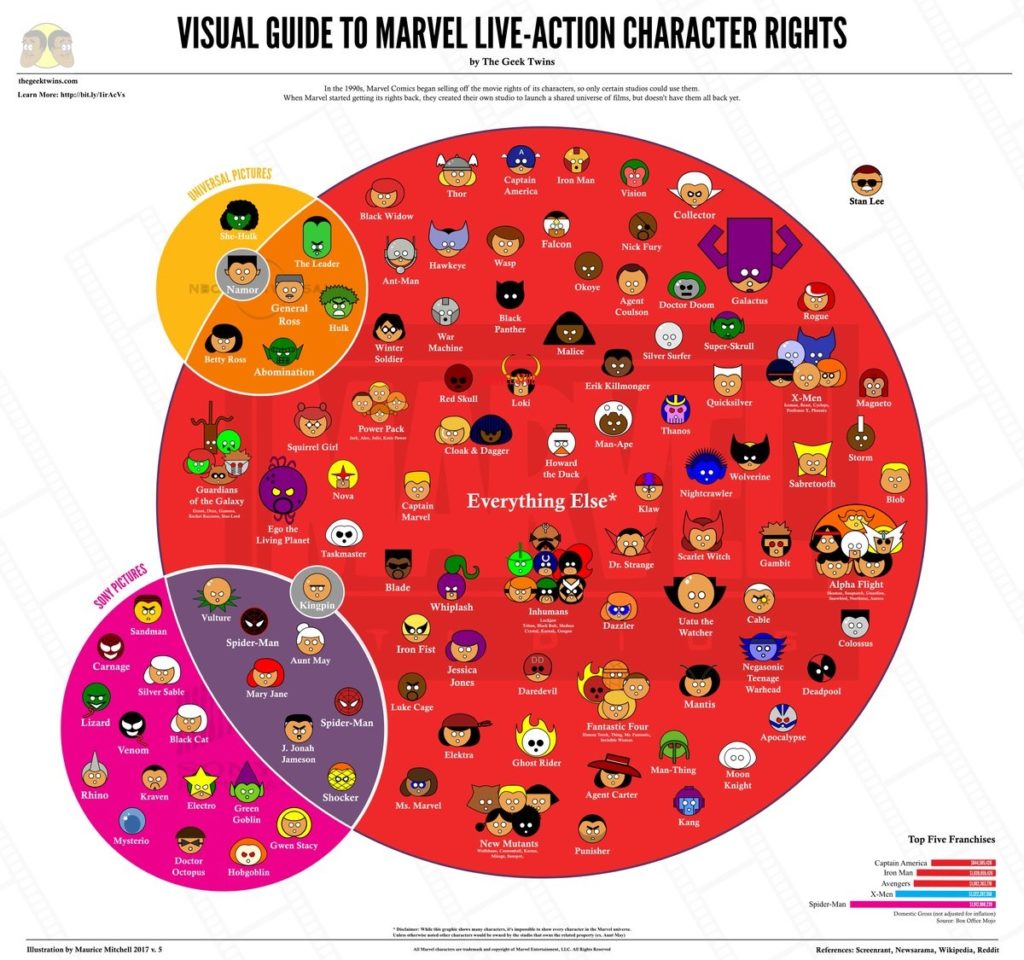 So, as you can see (as shared by Comic Book back in December), that big fat Marvel Studios bubble has gotten bigger and fatter, with all of the X-Men and Fantastic Four universe characters now/soon under the Marvel umbrella. Man-Thing, which at one time was an outlyer with Lionsgate, is now Marvel-owned, so I guess we can get that Man-Thing/Howard the Duck team-up we’ve always wanted.A couple of actually interesting things to note: first, Hulk is still co-owned by Marvel Studios and Universal, stemming from that first Hulk movie back in 2003. So all of the Hulk-universe characters we’ve seen in the MCU have been part-owned by Universal. She-Hulk is still Universal-only, which means a movie featuring her would be fairly unlikely, and this might also explain why we’ve been told repeatedly not to expect another solo Hulk movie; Universal might be like “nah, we’re good, you can use him but we don’t want to make anything.” Also, Namor the Sub-Mariner is his own thing, perhaps with a separate deal.Sony still has a pretty decent hold on characters in the Spider-Man sphere. While Marvel Studios has the rights to Spidey and his friends, it only currently has access to Vulture and Shocker (and also likely Scorpion) due to the deal for Spider-Man: Homecoming. Sony has all of Spidey’s villains, and Gwen Stacy. Although if reports are to be believed, Tom Holland’s Peter Parker may well show up in the upcoming Venom movie, so who knows?Does this help clear things up in the Marvel movie nightmare? Let us know in the comments below!

More nerdy things for your brain!