With all the news lately surrounding Doctor Strange lately thanks to his upcoming sequel, interest in Marvel’s Sorcerer Supreme is at all time high. But did you know that for a brief time, he was going to be Iron Strange? Or, should that actually be Doctor Iron? Well, whatever they were going to call him, early on in the production process for Avengers: Infinity War, they drew concept art for what would have been Stephen Strange in Tony Stark’s Iron Man armor. And yes, it is as cool looking as it sounds.

Thanks to the folks over at ScreenCrush, we’ve learned that Marvel Studios concept artist  Phil Saunders recently posted an image on his Instagram for the Doctor Strange/Iron Man amalgam that was originally going to be a part of Avengers: Infinity War. You can check it out down below:

For various reasons, it was then abandoned while they were ironing out the details of the screenplay. Apparently, this moment would have taken place when Doctor Strange is kidnapped by Thanos’ minions. According to the artist, Tony Stark “was going to transfer his armor to Strange to protect him from Ebony Maw’s torture needles.”

An extra cool detail is that Strange’s The Eye of Agamotto, which we know to be the Time Stone, is on the center of the armor where Iron Man’s arc reactor is usually located. And the armor looks to be more purple and silver than the red and gold of Tony Stark’s. So does that mean that Iron Man’s armor kind of like a high tech mood ring then? Groovy!

Doctor Strange and Iron Man have always been similar archetypes. Which is why maybe the two don’t really get along, either in the comics or on the big screen. Both heroes have essentially the same origin story. Both Stephen Strange and Tony Stark are wealthy men in the top of their field. Granted, Stark has a bit more money than Strange. But essentially, but are insanely successful. And insanely arrogant to boot. 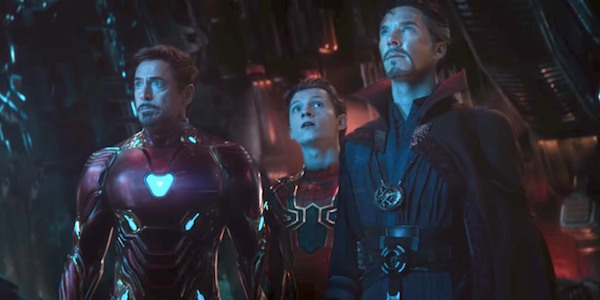 Then unexpected tragedy strikes, which physically impairs both of them. They then have to turn to outside sources – science for Tony, magic for Strange – to save themselves. And they both come out changed men, and superheroes to boot. And let’s not forget, they also have pretty similar facial hair too.

Could we still see this Iron Strange armor come to life? Probably not in live-action. But we would not be surprised if we see something that looks like this show up on the upcoming Disney+ What If? series? It seems like “What if Stephen Strange became Iron Man?” is a no brainer of an episode to make. It seems like the What If? cartoon would be the perfect place to give a lot of these unused ideas from the feature films and give them new life. It’s not quite as cool as seeing Benedict Cumberbatch put on the armor in real life, but it could still make for an awesome visual. Here’s hoping it’s something that happens one day.