MANSIONS OF MADNESS is Back With Horrific Journeys - Nerdist

MANSIONS OF MADNESS is Back With Horrific Journeys

The scenarios are the lifeblood of a Mansions of Madness expansion as they provide the playground for us to frolic through. The value of these releases is judged not by the physical components, but by the creative spark of the stories and the amount of content for us to explore. From that perspective, Horrific Journeys is one of the strongest releases yet. 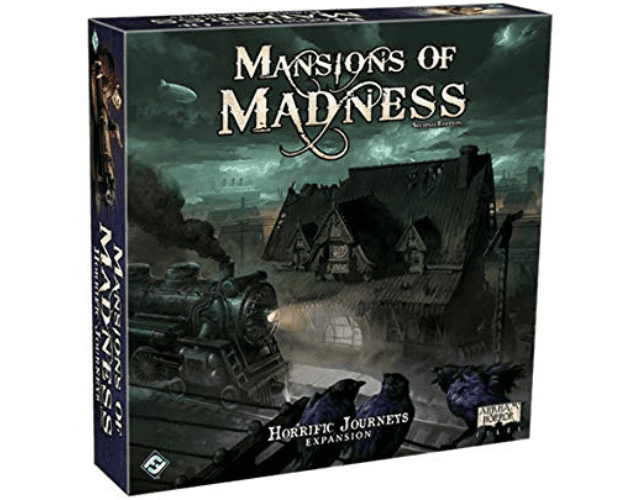 “Murder on the Stargazer Majestic” is the first taste of overland encounter. Here players will board a transatlantic airship and be swept up in a murder investigation. The tone is heavy and play is focused on deduction. You will gather clues and attempt to identify the killer among the inhabitants, although time is, of course, short as it always is.

The second offering features a bizarre sequence of disappearances upon a raging train. The tempo is more rapid than the Agatha Christie offering and things take a surreal turn midway through. The layout of an elongated series of cars is delightful and several tricks–such as disconnecting a rear car to leave a gibbering monster behind–are presented in compelling and unexpected ways. As the pressure builds this one becomes quite tense and culminates in a wonderful finale.

“Hidden Depths” is the final and perhaps most divisive scenario. It’s a lengthy ride aboard a sinking ocean-liner that will conjure thoughts of both Titanic and The Creature From the Black Lagoon. This one draws most of the discussion due to the inclusion of one or more traitors at the outset of the adventure. Agenda cards are dealt out and a select few (depending on player count) will find themselves as hybrid Deep Ones.

While the idea of forcing shady behavior upon individuals has already been explored with the controversial insanity cards, the game has not delved into including outright antagonists among the group. Surprisingly, this feature is actually pulled off with aplomb. The clever decision to give everyone at the table a similar goal of reaching the lifeboats is the nifty trick that lubricates this engine and keeps the game humming along. Designing the actual scenario around this facet makes the whole thing work unexpectedly well and brings it all back home. 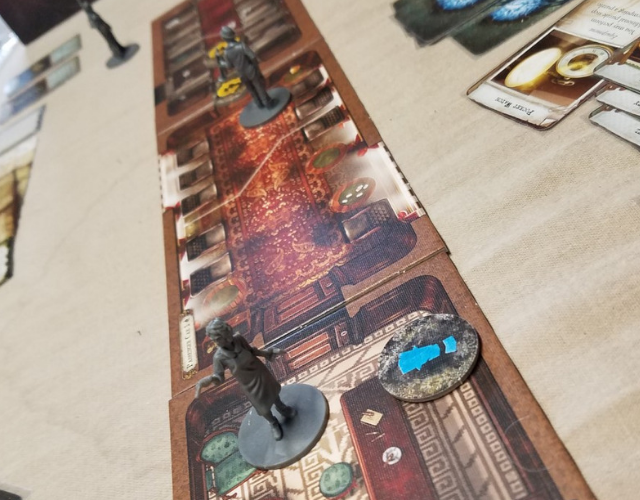 I have noticed a few oddities among my journeys. A bug was encountered in the first scenario where victory was achieved but not triggered in the application. This lead to a loss as time slowly ran out and resulted in disappointment. Thankfully a second play managed success and no digital trap.

There were also a couple of bizarre occurrences such as finding a sea specific life preserver on the locomotive. Perhaps this was intended, but it feels as though the algorithm that randomizes items produced a hiccup. Finally, it’s almost fitting that the shark is jumped in an expansion that features the ocean, the leap occurring with a handheld Gatling gun . While the Arkham Files games are indeed pulpy, I found this a step too far and somewhat distracting from the otherwise excellent atmosphere.

Beyond those irritants, there is a cargo hold of material to love. The additional investigators, spells, and items are lovely. The new monsters are hellish to encounter, particularly the Dimensional Shambler who produces rift tokens that can suck you into another dimension.

The new status of “Lost in Time and Space” is intriguing, although the results are mixed. Certain effects can result in a character plucked from the board and shuffled to the side. Instead of their normal turn, they will flip the card and experience their own little encounter. They must pass a skill test in order to find their way back, failure resulting in a loss of turn and an extended trip in the metaphysical dark. It’s a neat concept and one that succeeds in small spurts. 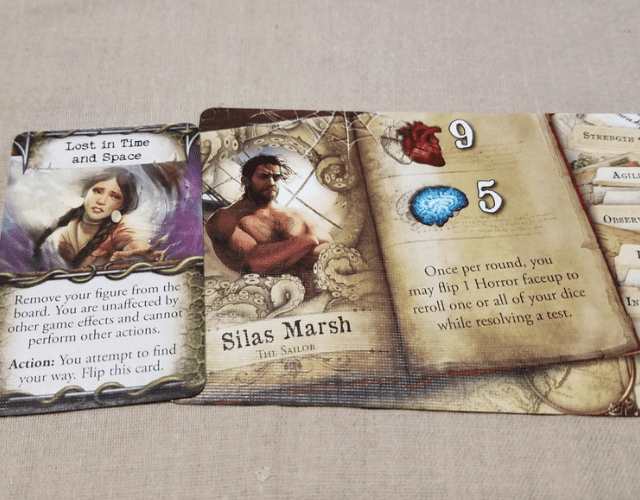 One key observation I can provide pertains to thematic accomplishment. It feels as though the design team has finally honed the direction of this game and come to realize that the investigation heavy scenarios are the strongest. Stories of gathering clues and solving mysteries align most smoothly with the design parameters and produce the most satisfying experience. Horrific Journeys embraces this notion and delivers upon the promise.

While I find myself still pining for an expansion that explores a more lengthy multi-scenario narrative, I can’t help but recognize this release as the current pinnacle of Mansions of Madness expansion content. By bucking the norm and exploring new environments it offers an experience that is both alien and fascinating.