Mansions of Madness Heads to the City in ‘Streets of Arkham’

We love tabletop games here at Geek & Sundry, and we love to showcase the best games out there. If you want to stay tuned into what’s new and exciting in world of tabletop games, be sure to tune into  Game the Game hosted by Becca Scott returning soon on  Twitch and  Alpha. In the meantime, you can catch Becca showing you how to play all sorts of games here on Geek & Sundry.

Mansions are yesterday’s news. Now all the action is happening in the blood-soaked cobblestone streets of Arkham. We have lonely diners, an active morgue, and a hellacious museum that could serve as a rated R version of that popular Ben Stiller flick. A few expansions deep into Mansions of Madness 2nd edition, and somehow designer Nikki Valens and company are still keeping it real and hitting us with fresh scenarios that tickle the imagination.

While I’d argue that the plastic in this box is the least interesting aspect of the release, they’re definitely the first elements to draw your attention. One of the more ho-hum qualities of this game is the fact that it has an enormous cast of monsters, yet they all function very similarly. Whether it’s a Star Spawn or a Hunting Horror, the fugly otherworldly being marches forward and eats away at your health and sanity. You trade blows with your axe or unload your shaky revolver into its gullet and all’s well and good.

Streets of Arkham doesn’t deviate here as we’re gifted Skeletons, Star Vampires, and a Lloigor. The latter of the bunch is an impressively large miniature with a maw I wouldn’t stare into no matter my state of inebriation, but the rest are more plastic minions to add to a swelling army of gray. 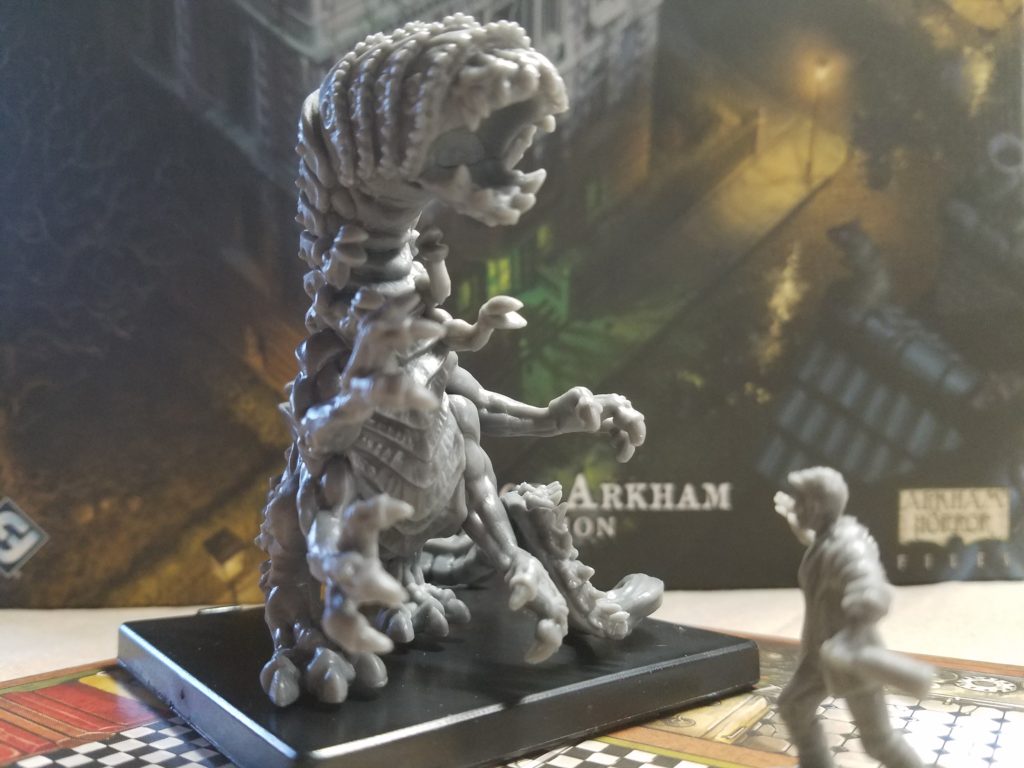 On the surface, a similar issue exists with the characters. We already have 75 different versions of the Hardy Boys and Nancy Drew and hardly need more options. At least, that’s how I felt until I was able to unleash Marie Lambou’s bayou voodoo on some terrestrial scum. Tommy Muldoon is no slouch either clocking in as one of the strongest characters in the game. His four damage rifle that he starts with (yeah, really) also affords him a re-roll every single round. Reformed cultist Diana Stanley and bootlegger Finn Edwards are also sure to find niches within your investigator groups as they offer solid skillsets and unique abilities.

The tiles are of course gorgeous—check out that Stegosaurus!—and surprisingly inject a great deal of variety into the game. With such a plethora of tiles already jammed into the previous releases, it’s difficult to find a place for new cardboard locales but Streets of Arkham easily wins you over.

The real meat of any Mansions of Madness expansion is the scenario content. It’s where the bulk of development effort is placed and there’s a lot going on in the background of the application. The strength of content thus far has been excellent and much of the reason for this game’s undying success. Of course this new offering nails it. 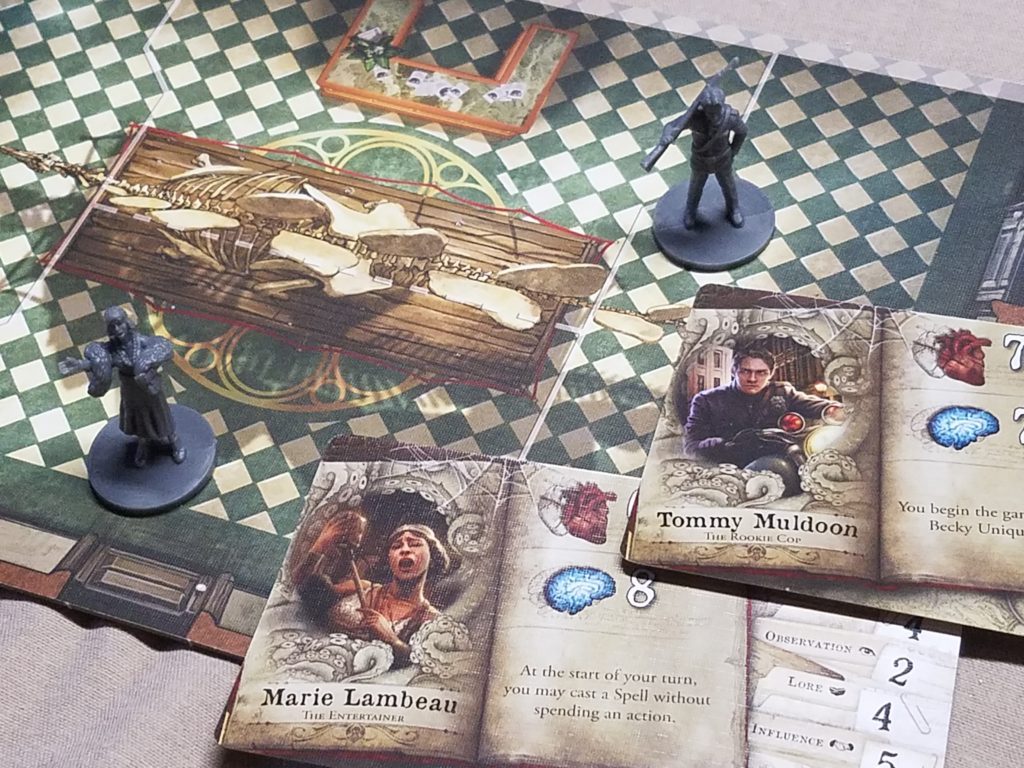 Astral Alchemy is the first of the trio and it’s an interesting inclusion. The group heads off to the Miskatonic University campus to read some books and kick some tentacle ass. Unfortunately, MU is all out of literature.

The interesting mechanical twist is a tempo that’s directly manipulated by the players. There’s a countdown of sorts and the participants are able to keep it in check or let the pot boil over. The level of tension and how you’re able to wrestle with it to maintain an even keel is engaging and a thrill. This scenario also utilizes the new improvement mechanism where characters can increase their stats during play. This is a solid add as it affords some authoritarian control over your character’s arc during play, but many times can come at a cost or come back to haunt you later.

The middle offering, Gangs of Arkham, features a pressure-cooker of a situation. An eerie murder has occurred and it threatens to push two prominent gangs into all-out war. Before you know it Rick’s lost his way, Carl an eye, and the ratings have plummeted.

Ill-Fated Exhibit is one of the strongest scenarios we’ve ever seen. It’s a sprawling investigation that will have you jotting down notes and working your way through a logic puzzle upon culmination. Fighting Cthulhu’s groupies is a secondary concern as this is all about investigation with your eyes and noggin’. You’ll get to study ancient artifacts and have a sobering chat with some near-psychotic museum employees. Life’s grand.

As a product, Streets of Arkham is not quite perfect, but it’s still first chair and keeping our foot a-tappin’. There’s a lot to like and some interesting twists we haven’t seen. Due to the game’s reliance on mysteries, new scenarios are a necessity to keep the blood pumping and Fantasy Flight Games has come through on their end yet again.

Have you played Mansions of Madness 2nd Edition? Let us know in the comments! Don’t forget to check out into our tabletop show Game the Game hosted by Becca Scott as we play games and talk about what’s happening in the land of tabletop gaming on  Twitch and  Alpha every Wednesday starting at 4 PM PT.

In addition to Geek & Sundry, Charlie Theel writes for Ars Technica, Miniature Market’s The Review Corner, and co-hosts the gaming podcast  Ding & Dent. You can find him on Twitter  @CharlieTheel