THE MANDALORIAN Comes to Life in Season 2 VFX Reel - Nerdist

THE MANDALORIAN Comes to Life in Season 2 VFX Reel

From Krayt dragons in the desert to epic fights on transport trucks in the jungle. To crashing spaceships on ice and also in water, The Mandalorian‘s second season once again brought monsters, vehicles, and locales of the galaxy far, far away to life. Those scenes required plenty of computer generated special effects. But this is still Star Wars after all. George Lucas built the franchise with practical effects. And a new behind-the-scenes video from Lucasfilm’s Industrial Light & Magic shows how it blended both old and new VFX techniques to bring the hit Disney+ series to the screen.

Visual Effects Supervisor Richard Bluff explains how the ILM team made Jon Favreau’s vision for season two of The Mandalorian a reality in this VFX reel. Their work included employing a cutting edge approach. The type of thing that has long made the studio a leader in the industry. From ILM:

“For its sophomore outing, Lucasfilm’s hit Disney+ series built upon the groundbreaking technical and artistic achievements accomplished during season one, combining traditional methodologies, with ever-advancing new technologies. The team also increased the physical size of the ILM StageCraft LED Volume which would again be used for over half of all scenes. This season also marked the debut of ILM’s state-of-the-art real-time cinema render engine called, Helios. The high-resolution, high-fidelity engine was used for all final pixel rendering displayed on the LED screens and offers unmatched performance for the types of complex scenes prevalent in today’s episodic and feature film production.”

But this inside look also shows how practical effects also played a huge role in the season. The series used “over 100 puppeteered creatures, droids, and animatronic masks” to bring its many creatures to life. That included a ten foot-high, rideable puppeteered Bantha. (Which we would like to borrow for Halloween please and thank you.) And, as we told you about before, the show also uses practical miniatures and motion control photography to make its ships fly. Even some of its terrestrial machines use stop motion animation. Like the Scrap Walker at the Karthon Chop Fields. ILM also turned to miniatures to help extend some of the many locations of The Mandalorian. 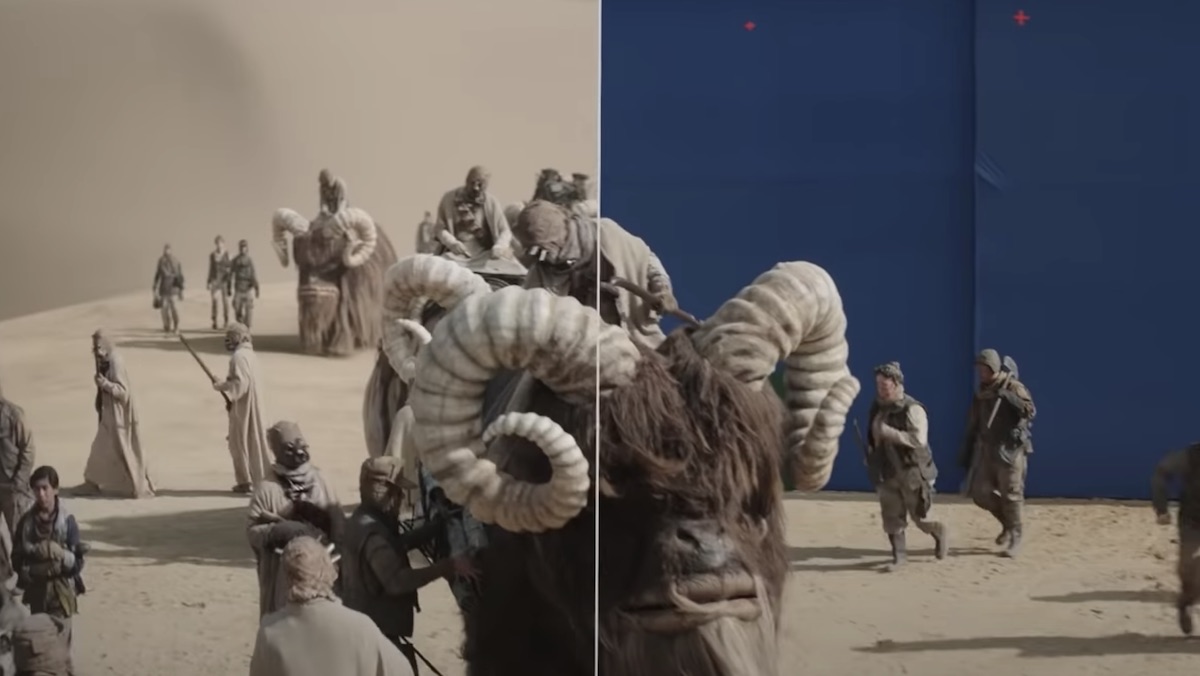 At the end of the day though it’s not important that some visual effects came from computers. While other came from practical means. It’s that we can’t tell the difference until we see a video like this.