These Luxury BLACK PANTHER Watches Are Truly a Marvel - Nerdist

These Luxury BLACK PANTHER Watches Are Truly a Marvel

The great thing about nerds is there are all types of them. Including extremely wealthy ones who are willing to drop $30,000 on a Batmobile desk clock. Or, for the ultra-well-heeled Marvel fans, somewhere north of $100,000 on a limited-edition Black Panther wristwatch from Swiss luxury watchmaker, Audemars Piguet. And while each one of Piguet’s watches has an absurd level of detail, it seems, sadly, they don’t consist of any Vibranium whatsoever.

Design Taxi reported on Piguet’s new line of Black Panther watches, which it unveiled at a recent press event. During the event, the watchmaker auctioned off a watch for charity. And while the bidding began at $100,000, the pricey bauble ultimately cost its buyer $5.2 million. (The unnamed buyer was probably not Iron Man.)

Audemars Piguet writes on its site that the watch’s “futuristic design recalls the cutting-edge suit” Black Panther wears. The watchmaker adds that the watch has a sandblasted titanium case with black, ceramic trim. And at the center of the watch face? T’Challa, the king of Wakanda, looking like he’s ready to claw Thanos’ face off. Or, if the watch reads midnight and you’re still awake, maybe claw open a bag of crackers.

While the centerpiece Panthers are initially 3D-printed out of white gold, they’re hand-finished and painted. Every piece of each flying tourbillon is also hand-placed with tweezers; a deeply satisfying process you can watch on Piguet’s site.

The only part of the watch that sounds a bit pedestrian for the price tag is its wristband, as it’s mostly rubber. Speaking of that price tag, that’s a ballpark estimate on our part. Piguet doesn’t outright say how much each one of the 250 available watches costs; no doubt people would find out during their appointments. 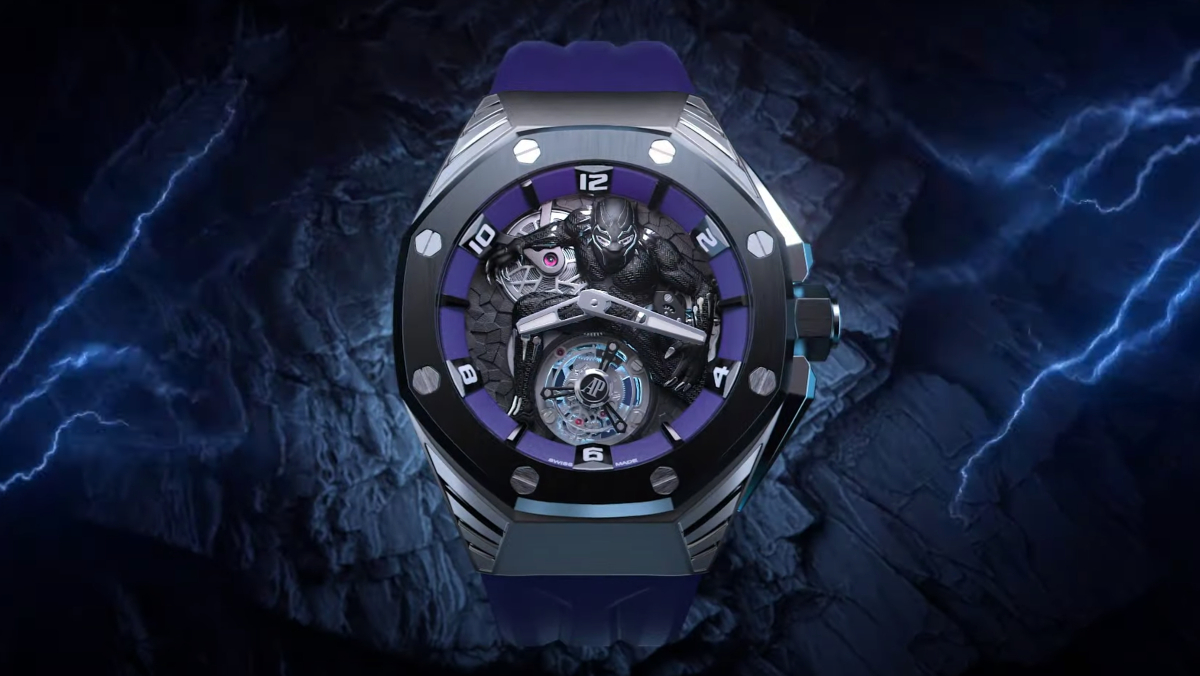 But the bidding for the watch at auction did begin at $100,000. And other Audemars Piguet watches go for $150,000-plus easily on eBay. Which means any ultra-wealthy nerds out there better get to bidding if they want people to marvel at their swag.