Nothing tests a relationship like having to solve a murder—especially when you’re the main suspects. But it seems that’s exactly what happens in Issa Rae and Kumail Nanjiani’s new movie, The Lovebirds. The comedians star as Leilani and Jibran, a couple on a mission to clear their names after being left on the hook for the murder they witnessed.

In the newly released first trailer, a man claiming to be an undercover cop commandeers Jibran and Leilani’s car, chasing after a man on a bike. Only, after he repeatedly runs over the “suspect” do the couple realize he’s not actually an undercover cop. Abandoned at the scene of the crime with the body, Jibran and Leilani resolve to clear their names and solve this murder mystery. Naturally, this is not as easy as it sounds.

If the trailer is any indication, clearing their names is going to be an uphill battle as Jibran and Leilani bicker their way through New Orleans, searching for clues and evading the police. The charming and hilarious trailer is definitely reminiscent of other amateur sleuth films, like Date Night and the criminally underrated Game Night. Which is certainly not a bad thing, as if anything, we’re always looking for more goofy murder mystery movies.

From the film’s official synopsis:

“A couple (Issa Rae & Kumail Nanjiani) experiences a defining moment in their relationship when they are unintentionally embroiled in a murder mystery. As their journey to clear their names takes them from one extreme—and hilarious—circumstance to the next, they must figure out how they, and their relationship, can survive the night.”

In addition to the trailer, Paramount Pictures also released a poster for The Lovebirds, which perfectly captures the film’s hilarious mood. “All they wanted was a quiet night out,” indeed. 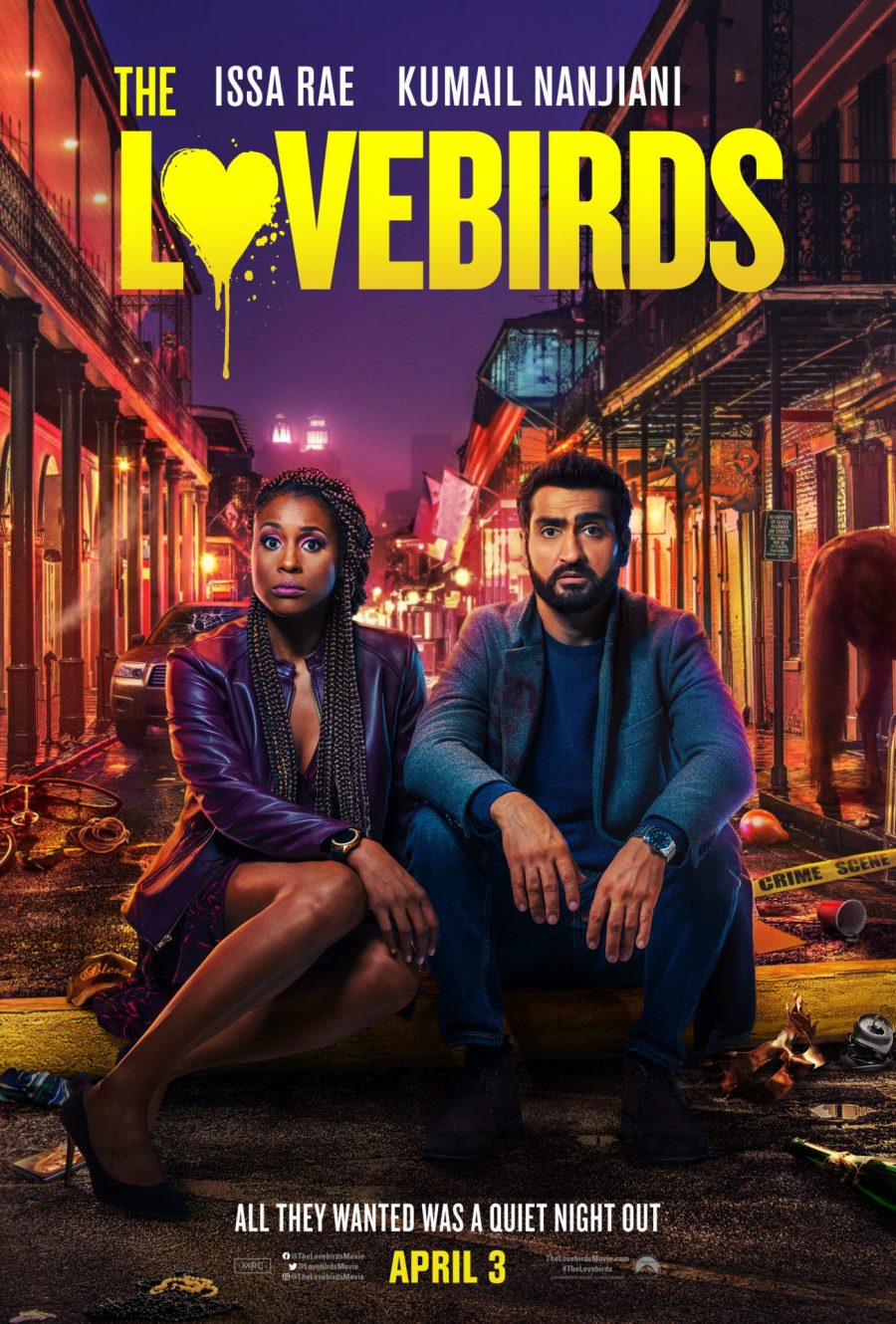 The film also stars Paul Sparks (House of Cards), Anna Camp (Pitch Perfect), Kyle Bornheimer (Brooklyn Nine-Nine), and Moses Storm (Sunnyside). Wet Hot American Summer‘s Michael Showalter, who directed Nanjiani’s film The Big Sick, is directing and Aaron Abrams & Brendan Gall wrote the script. In an interview with Entertainment Weekly earlier this week, Rae and Nanjiani revealed the film was written for a white couple so the pair reworked aspects of the script to better reflect their characters. “It’s not a story about race but we wanted to acknowledge our race and the fact that we’re an interracial couple,” Rae told EW.

This year is shaping up to be a busy one for both Rae and Nanjiani. Rae also stars alongside Lakeith Stanfield and Courtney B. Vance in The Photograph, which comes out on February 14, and her HBO series Insecure returns for season four in April. Meanwhile, Nanjiani—alongside his wife Emily Gordon and Master of None co-creator Alan Yang—serves as executive producer for Apple TV+ anthology series Little America and will make his MCU debut in The Eternals, which premieres in November.

The Lovebirds will premiere at South By Southwest in March before hitting theaters on April 3.