THE LORD OF THE RINGS’ Shire Recreated as Huge Gaming Diorama

Is there a Lord of the Rings locale that warms our hearts more than the Shire? The home of Frodo and Bilbo Baggins, as well as all the other Hobbits, is where most fans of Middle-earth would visit if they could. Close your eyes and think of the Shire, and you can just hear Howard Shore’s comforting music pop into your head. Anyone down for a pint at the Green Dragon Inn?

Now, Neil of the YouTube channel Real Terrain Hobbies has just constructed a meticulous recreation of the Shire, a.k.a. Hobbiton, for their own home. Only this Shire is reimagined as an exquisitely detailed wargaming diorama. And it is truly a thing of beauty. You can watch a video of the creation of this incredible DIY project right here:

It all started with some 3D printed versions of the hillside homes of the Hobbits, made in exquisite detail. Then Neil created the terrain, the Halfling homes, and all of the lights. And then came all of the painting, plus trees, rocks, the works. Of course, since this is a Shire wargaming diorama, an army was needed to fill everything out. Interestingly, war never actually came to the Hobbit’s pastoral home (in the movies, at least). And yes, there is a little pumpkin patch. What are Hobbits without their garden-grown vegetables, after all? 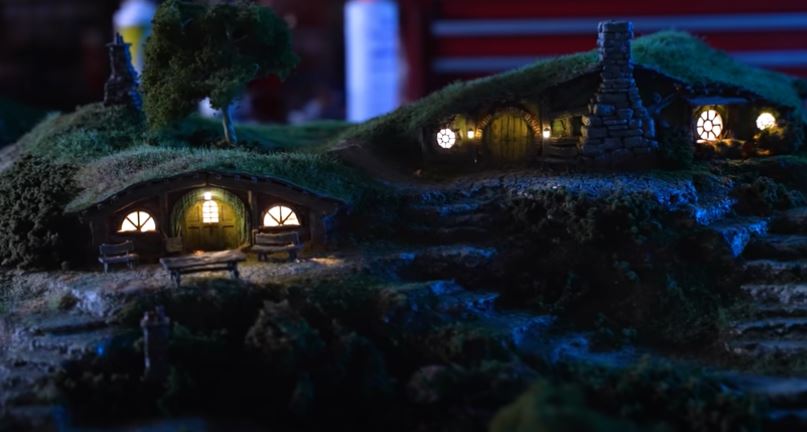 This has all been a very long process. Neil first announced that he was working on a Shire build in May of this year. So it took at least four months to complete, if not more. But the final result is stunning and a true work of art. In addition to this Shire wargaming diorama, real Terrain Hobbies has created some other amazing builds, almost all based on medieval and fantasy worlds. He even has some that are based on The Witcher. Be sure to head on over to Real Terrain Hobbies to check them all out.

Tolkien
Who Is Adar on THE RINGS OF POWER? A History of LORD OF THE RINGS’ Orcs
Michael Walsh
10 MIN READ
SEE MORE