Look Into WARHAMMER 40K's Past & Future With BLACKSTONE FORTRESS - Nerdist

Look Into WARHAMMER 40K’s Past & Future With BLACKSTONE FORTRESS

Some of the coolest stuff in Warhammer 40,000 are the tucked away corners of weird and wild sci-fi. They exist away from the massed battles of Space Marines, Tyranids, and Chaos heretics which most players engage with on the table. They’re strange things like roving hive planet gangs, defunct alien fortresses, and abhumans.

That sort of thing has never been entirely absent, but there was a de-emphasis on the smaller scale stories of the weird in 40k when the Specialist Games division was disbanded in the early 00s. What went with those games like Necromunda and Gorkamorka was the chance for writers to really let their imaginations go in unexpected directions. It’s easy to forget, when the scale of a game’s fiction is galactic, how big even a single planet is, and how much can go on in that space.

The return of Games Workshop’s middle-tier games has brought all of that back, and it’s one of the most welcome things in the company’s second golden age. There was the return of  Necromunda and Blood Bowl, then  Adeptus Titanicus, and now a 40k-ized version of Warhammer Quest called  Blackstone Fortress. It’s this new one which truly throws the doors open to 40k‘s endlessly diverse past and offers a glimpse at a robust, exciting future for the game’s lore. 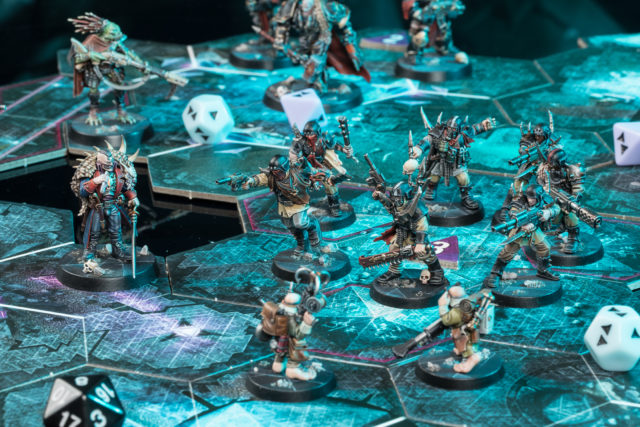 Let me preface the following by saying that I’m not a big reader of Games Workshop’s fiction. I’m a weirdo who likes reading non-fiction, preferring to get my fiction fix in more visual and tactile ways. Warhammer 40K, to me, has always conveyed what’s going on in its universe via visuals, which makes total sense since the actual game is so intensely focused on look and color. That also made the loss of certain models and motifs really sting for me; when 40k‘s version of Beastmen disappeared from the shelves in miniatures form, they were really gone for me, even if there were little mentions every now and then in out of the way spots.

Blackstone Fortress brings back the Beastmen via miniatures and rules for both the big boxed game and 40K. They’re presented in all their feral glory as easily swayed to Chaos, not primarily because of their mutations, but because of how awful humans are to them. For an old school player, the background firmly cements them as abhumans—strains of humanity which, through adaptation or mutation, become something akin to related but very different species.

This seems like a small thing, but it really brings back two things which threatened to slip away quite a bit over the past decade: the idea of the enemy within being more than just an Imperial slogan and plain old human brutality. This first one is nicely double-edged in Blackstone Fortress‘ description because the enemy might be within the Beastmen, or it might be within the humans who drive them into the arms of Chaos through wanton cruelty.

The Beastmen aren’t alone in this combination of return and foreshadowing. Chaos in general gets some promising stuff. The most obvious are the new look Chaos Space Marines in the box. The old boxed sets of Chaos Marines are creaky, having been in continuous production for nearly 20 years. There are only two in the box, but they’re new sculpts and hint that new miniatures may be replacing the old ones in the medium term future.

The Blackstone Fortress box also brings in proper Traitor Guardsmen miniatures. The idea of Traitor Imperial Guard has long been a mainstay of 40k lore, most notably the classic Realm of Chaos hardcovers, but outside some Forge World miniatures (which bear the standard premium prices for that company’s stuff) there’s never really been an official kit. A quick search of the topic yields extensive conversions of existing loyalist Guard miniatures. Blackstone Fortress gives you actual Traitor Guard. They are, as with most Games Workshop miniatures these days, gorgeous. More importantly, though, they’re distinctive: recognizably still Guard, but telling stories about how far they’ve fallen with their spikes and face masks.

The presence of the Traitors speaks once more to the idea of the enemy within. These aren’t genetic superhuman Space Marines or already suspect abhumans. The Traitor Guards are just normal old humans, seduced by whispers from the Warp urging them on to decadent notions of freedom and vainglory. Again, it’s not that this stuff was absent, but until you get the miniatures on the table for all to see, for most people it’s not concrete. An army of Beastmen and Traitors is very different from Chaos Space Marines. It tells a different story about who Chaos corrupts and how, and that in turn changes everything else about the game. 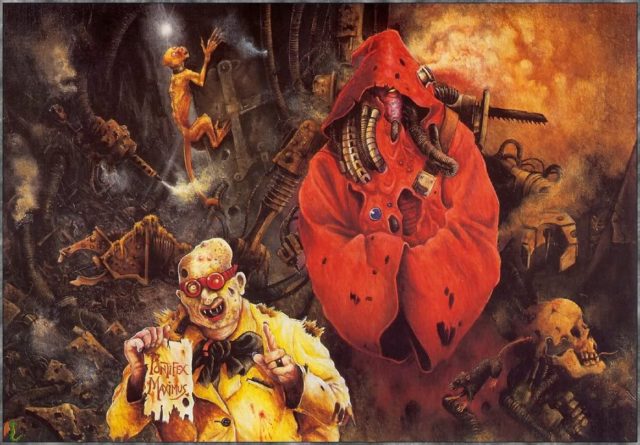 The Imperial heroes also look back without falling into the nostalgia trap. You play the companions of a Rogue Trader, one of those galaxy traversing combo merchant/pirates. This is well-worn stuff, but up until the recent Rogue Trader faction for Kill Team, there hadn’t been a Rogue Trader miniature in years. They exist now and as they expand, so do the possibilities of what an Imperial army looks like. Rogue Traders have functional immunity from prosecution in the Imperium when it comes to who they fraternize with. Older writing has them hanging out with everyone from Orks to robots. Even if it’s kept at the scale of Blackstone Fortress, this is the sort of open frontier 40k hasn’t officially delved into since the earliest days of 40k, when the game was appropriately subtitled Rogue Trader.

The Ecclesiarchy also makes a strong appearance in the game, with really nice miniatures showing their fanaticism to the Imperial cause. That makes for a nice contrast with dashing Rogue Trader, implying that what keeps these disparate human outlooks together is the threat of falling to corruption within or violence without. Maybe more importantly, it’s the first rumbling of the Sisters of Battle returning hopefully next year.

All together, Blackstone Fortress does a neat thing which Games Workshop is in the process of mastering: it recalls a long, fondly remembered past without falling into the nostalgia trap. That’s a deceptively difficult thing to do. The fact that the creators of Blackstone Fortress did this while hinting at an interesting, dynamic future for the 40k universe should be appreciated.

Got a favorite piece of 40k lore making a recent return? Tell us about it in the comments!