Monday marked the 19th anniversary of a memorable Lizzie McGuire episode: “Between a Rock and a Bra Place.” First airing on May 11, 2001 (how is that possible?), the episode featured Lizzie and Miranda shopping for their first bras with Jo tagging along. Ah, that often cringeworthy moment of adolescence put on the screen for all of us to see. To honor the anniversary, Hilary Duff and the rest of the Lizzie McGuire cast reunited for a virtual table read. 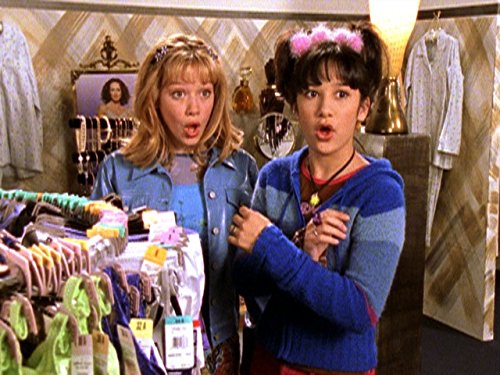 Duff explains Jake Thomas, a.k.a. Matt McGuire, tossed out the reunion idea. It’s the first time the Lizzie McGuire cast has all been together (virtually of course) in nearly 18 years. Seeing the likes of Lalaine, Hallie Todd, Robert Carradine, Adam Lamberg (Gordo!), and more back in these roles gives me feelings. What a surprisingly nice treat in these weird times to rewind the clock 19 years and watch teens try to do bra math. Between the episode itself and watching the now quite a bit older cast return to these characters, we can’t stop smiling.

When this Lizzie McGuire episode aired on the Disney Channel in 2001, it was a whole thing. The episode’s co-writers, Nina Bargiel and Jeremy Bargiel, joined the group and reminisced about talking bras with Disney. Jeremy Bargiel recalled, “When the network asked us about that, there were raised eyebrows. They were like, ‘Okay, well, we’re going to throw down the gauntlet. You can say the word twice. You can’t ever show one.’ But it was definitely something they thought would just go away.”

Only the Disney Channel would view bras, a piece of clothing as common as pants, as a complete scandal.

And it turns out Disney still might not be ready for Lizzie McGuire to tackle more weighty issues. Disney+ announced a revival of the show showcasing the now adult Lizzie living in the real world. The cast and crew filmed two episodes. However, Disney fired showrunner Terri Minsky in January. Disney apparently didn’t feel the revival fit into their “family friendly” guidelines. Hilary Duff posted her opinion on moving ahead with the revival, hoping they could move the show to the Disney-owned Hulu. We hope that works out, because we need to see more Lizzie and co.