Live Out Your Own 80's Action Movie in HARD CITY - Nerdist

Fade in on a bustling street at night. The city is vaguely New York-ish. People are walking, minding their own business, eating pizza and other big city appropriate foods. All of a sudden a sewer grate busts open and swarms of green, oozing mutants rush out. The citizens of this off-brand New York are gripped with fear. Incapable of defending themselves they collapse to the ground, certain that all is lost. But what’s that? In the distance a siren blares. Hope is restored as a police car speeds in, flattening several zombies beneath its tires on the way. The doors fly open and out come the heroes of the day, shooting wildly at every mother-loving mutant on the scene. The day is saved, but off in the distance, Dr. Zero watches closely, his plans just beginning to take form.

If you were awake during the 80s and 90s, you probably watched a movie like this. Hero cops, despicable bad guys, and a blatant disregard for any actual police procedure. Hard City (on Kickstarter now) is here to bring those movies to life again, this time with you and your friends in control. Some of you playing as the larger than life police officers and one taking on the role of Dr. Zero, whose mutant armies are looking to take over the city. As you might have guessed, the aesthetic is strong with this one. 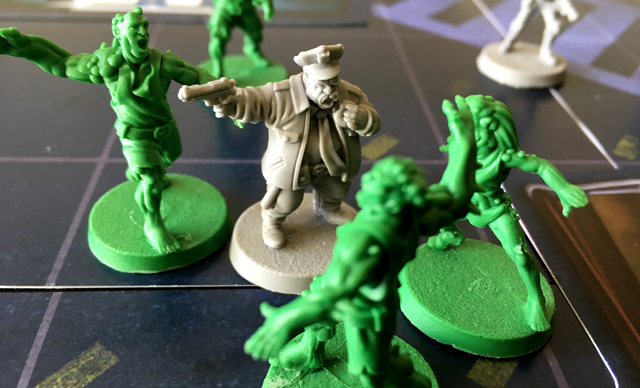 Hard City places the villain and hero players in one of several scenarios, each with different gameplay elements and win conditions, but it will always involve the cops kicking the butts of an unreasonable amount of mutants. This game plays asymmetrically, with each cop player having a number of action points (represented by donuts, of course) that they can spend on moving, shooting, using items, etc., while Dr. Zero’s abilities are determined by a hand of cards, which can be played for specific actions written on the cards or as fuel for basic actions, controlling the mutants on the board and summoning more by the handful. 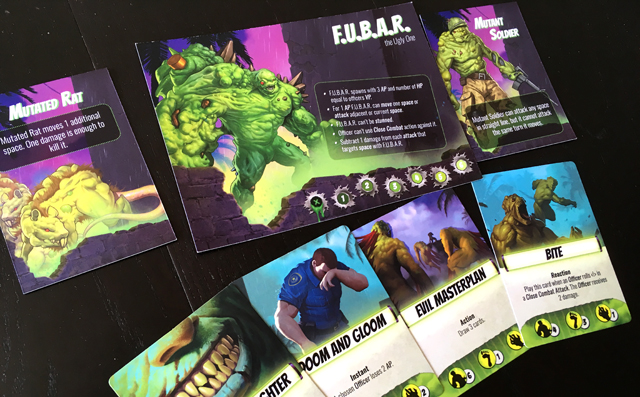 The cops get stronger as they kill more and more mutants, gaining new abilities for every ten mutants shot down, so Dr. Zero needs to stay sharp. And the heroes have another tool at their disposal: cutscenes. As you play the game you’ll draw cutscenes that can only be activated in specific ways. These are powerful abilities that also play very well into the retro action movie theme. When multiple cutscenes are available, you can choose any of them to use, but if played out of order the earlier cutscenes become lost as you fast-forward to the good parts. 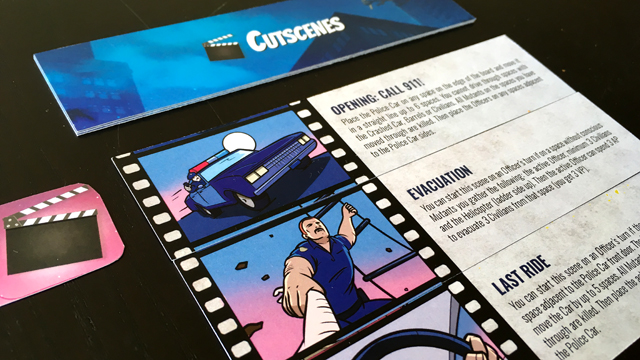 Hard City knows exactly what it is, and is at its best when the players enthusiastically embrace the B-movie mentality. While riding high on this wave of nostalgia and earnest energy, you might not even notice that the mechanics behind what you’re doing are actually really solid. The decisions you have to make in order to win fit so well with the theme that it’s easy to stop thinking like a gamer and start thinking like an action hero. Do things because they’re cool. Don’t worry too much about who these mutants used to be. Ride a skateboard into a barrel, throw that barrel into a swarm of mutants, and walk away without looking at the explosion. Hell Yeah! 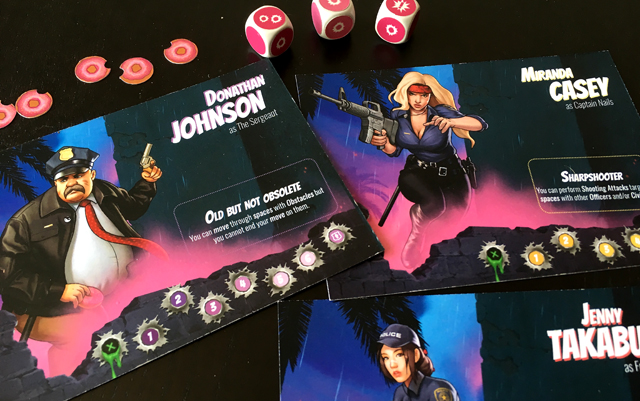 If Hard City sounds like it might be right up your alley, their Kickstarter ends on November 2nd so act quick. They’ve already passed their funding goal and are well into stretch goals unlocking things like more cutscenes, mutant abilities, and new characters that you might just find familiar.

Want to secure your copy from Kickstarter? Check out the Hard City Kickstarter page for details.