The day has finally arrived. After over a year of planning, Brian Michael Bendis and Ryan Sook’s Legion of Super-Heroes has arrived. Issue #1 features a whole bunch of brilliant sci-fi action (and you can read Bendis breaking that down right here) but it also includes a very silly, fun, and heartfelt easter egg to an unexpected X-Men run. When we chatted with Bendis, we spoke to him about the “Frichtman tag” and the very sweet tale behind them.

As the story opens readers get to see Jonathan Kent A.K.A. Superboy meeting the titular team in the 31st century. As introductions are made, Jon notices that each of the massive roster has a little red rectangle following them around that showcases basic information about them. It’s a nifty little trick that takes an exposition tool that’s usually used on the production side of comics and puts in right into the story. It’s also a nod to one of Bendis’ besties, Matt Fraction, and his time on X-Men where he utilized what he called “dad tags” to introduce his characters. These short, pithy captions would introduce members of the X-Men by stating their real name, superhero codename, powers, and personality traits, creating quick intros for the large cast of rotating mutants. 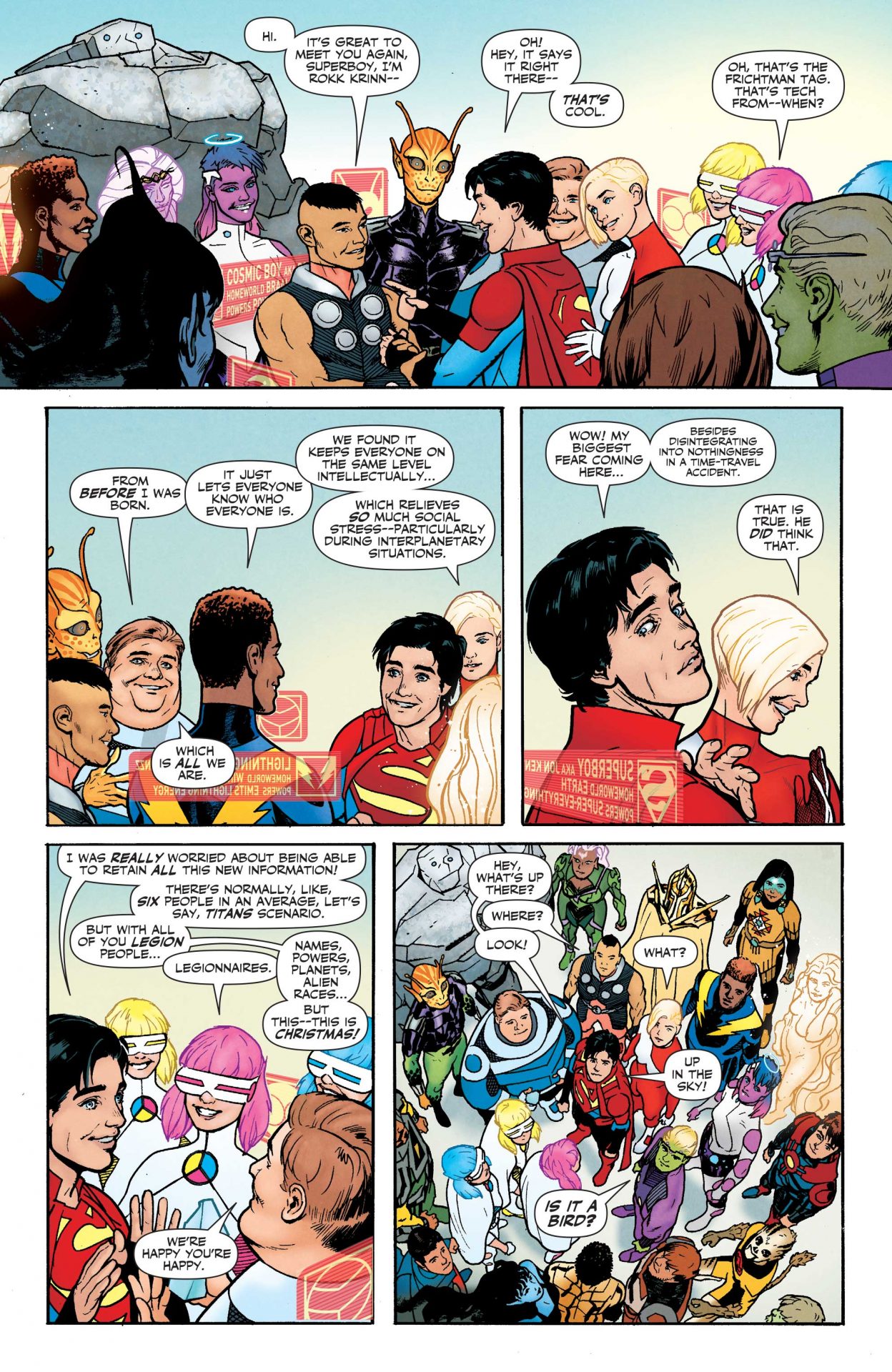 It was a very personal easter egg that Bendis was excited to discuss with us. “Honestly, it was weird. I told Matt over the phone, ‘Here’s where I mentioned your real name three times in this script and I haven’t mentioned Wildfire’s real name once!’ That’s a very strange experience,” Bendis laughed before giving some insight into how the tags came about. “So in the story, there are these tags that the Legion has. They have always existed in Legion lore, in the comics, there were always these old tags to tell you who the Legionnaires were.”

Bendis continued enthusiastically. “When Matt was on X-Men, he told me that he called his captions ‘dad tags’ which was like, ‘So my dad can understand the X-Men, basically just what I think my dad needs to know.’ I always wanted to steal them. I love them so much. He literally—because he’s one of my best friends—gave me permission. He came over and said ‘Brian, for your birthday I’m giving you the dad tags. You can have them and you can do whatever you want.’ And I said, ‘NOOO I can’t it’s too hacky. I know it’s too hacky!’ But 10 years later I get to Legion and I realized that the dad tags could actually be in the art, it could actually be part of the storytelling.”

The Frichtman tag is a really fun reimagining of how creators put exposition on the page. The fact that there’s also such a good and pure story behind them makes it even more fun to read. “I was able to scratch my Frichtman itch and finally take it to another level, so I was really happy I didn’t do the hacky thing and could use them all these years later,” Bendis laughed.

Legion of Super-Heroes #1 is out now.