LEGEND, THE LAST UNICORN, and the History of Mythical Beasts - Nerdist

LEGEND, THE LAST UNICORN, and the History of Mythical Beasts

Ridley Scott’s cult film Legend turns 35 this week. It begins with a black screen as red text scrolls, setting the stage for the action. It tells us that once upon a time there was only darkness, followed by a light which brought love to the world and expelled the darkness. Unicorns keep this light safe. Only the purest of mortals can find the unicorns, like Jack (Tom Cruise) a youthful Green Man of the forest. When he shares them with his lady love, impetuous teenager Lily (Mia Sara), all Hell breaks loose. You see, the Lord of Darkness (Tim Curry) sends goblin henchmen to follow her. Their mission is to kill the last remaining unicorns. If they succeed, Darkness will rule the land once again. From this strife comes a balance of light and dark. As the title card tells us, that’s when legends are born.

A few years earlier, venerable animation duo Arthur Rankin Jr. and Jules Bass turned Peter S. Beagle’s 1968 novel The Last Unicorn into an animated feature film. The two stories share several commonalities. In The Last Unicorn, the titular unicorn (Mia Farrow) overhears hunters in her forest proclaiming she must be the last of her kind. A sing-songy butterfly informs her King Haggard’s (Christopher Lee) Red Bull had rounded up all the unicorns long ago. And so, she sets out to find them. Along the way, magic transmogrifies her into a human, known as Lady Amalthea. Schmendrick the Magician (Alan Arkin), Molly Grue (Tammy Grimes), and Prince Lír (Jeff Bridges) aid her.

But where did these stories come from and why are they so similar?

Some of the earliest myths about unicorns come from the Indus Valley and ancient Persia. These stories found their way to the writings of historians from the Hellenic period of ancient Greece, and then into translations of Biblical texts. While almost always described as horse-like, other descriptions include attributes similar to that of a wild boar or having the body of a goat with the feet of an elephant. In fact, scholars posit that the unicorns that appear in the Bible are likely mistranslations; the animal described was probably an ox. 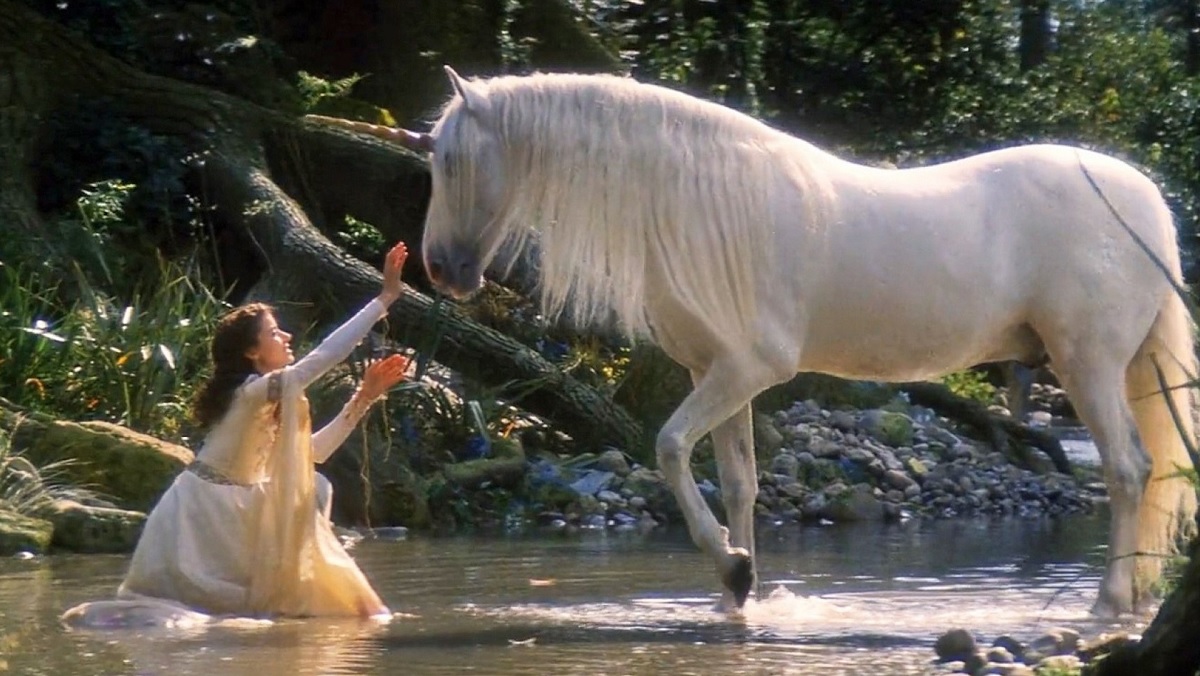 While in Legend the unicorns take on the typical share of a white horses, in his novel Peter S. Beagle describes his unicorn as nothing “like a horned horse, as unicorns are often pictures, being smaller and cloven-hoofed, and possessing that oldest, widest grave that horses have never had, that dee have only in a shy, then imitation and goats in dancing mockery.”

Regardless of these inconsistent descriptions, one thing remains: unicorns represent innocence, purity and newness. In the middle ages, they found themselves entwined with religious iconography depicting the Incarnation of Christ and that of his mother the Virgin Mary. Likely, what happened is the early church mixed their beliefs with pagan myths like that found in the Physiologus, a Latin book written around the second century CE. In it, we learn people can only catch a unicorn when it lays its head down in a virgin’s lap. 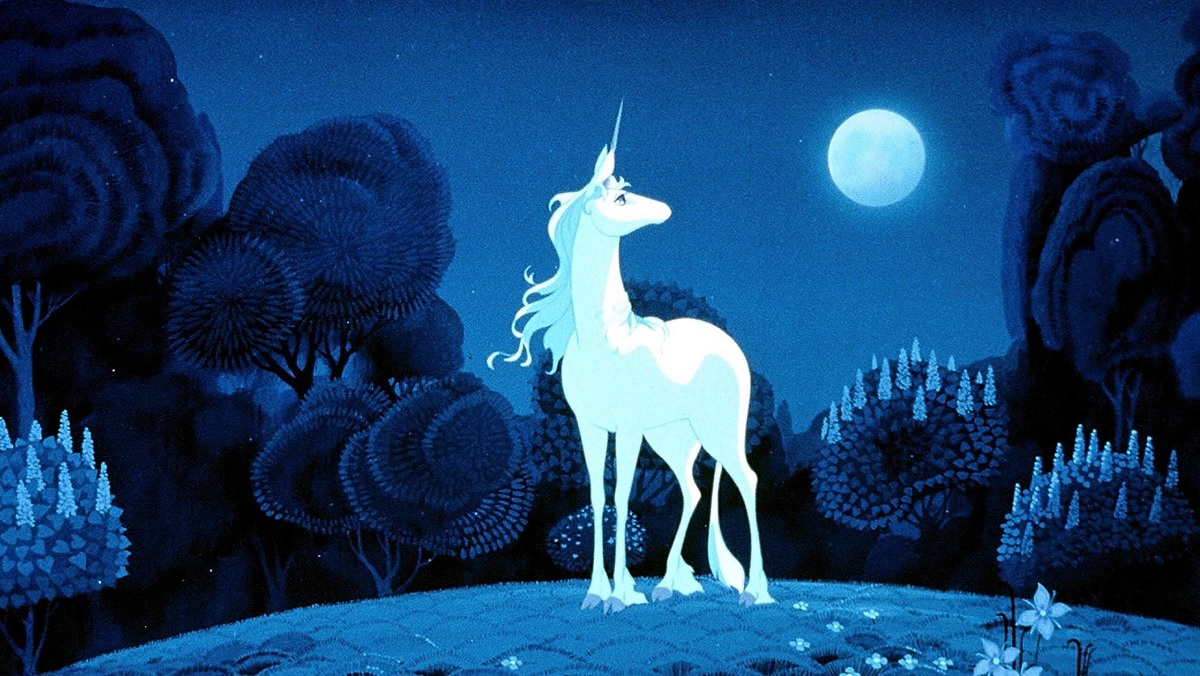 This continued into the late Medieval period where we began to see unicorns depicted in tapestries. The most famous today include La Dame à la licorne, a series of six tapestries made in Flanders circa 1500. Each depicts a lady with a unicorn on her left and lion on her right and represents the five senses, plus one that scholars think represents courtly love.

Perhaps the greatest blending of Pagan and Christian mythology are the Verteuil tapestries, also known as La Chasse à la licorne, likely made in Belgium circa 1500-1510. They are seven tapestries that depict noblemen as they hunt and capture a unicorn. Some have argued the story within these tapestries represent the Passion of the Christ, which is the short time between his return to Jerusalem, his trial, crucifixion, and eventual resurrection. Curious readers can actually check these tapestries out for themselves at the Met Cloisters in New York City.

Both Legend and The Last Unicorn tap into this mythology, and the imagery of these tapestries. As Jack leads Lily to see the unicorns by hidden brook, he tells her “As long as they roam the earth evil can never harm the pure of heart.” Lily leaves Jack to get a close look at these ethereal creatures. As she reaches out to touch the unicorn stallion, director Ridley Scott frames her as in the La Dame à la licorne, with the unicorn on her right. It is at this moment that the goblins shoot the creature with a dart, paralyzing it so they can remove its horn. There is a long history of grinding unicorn horns into alicorn powder. Supposedly this powder had medicinal purposes. Sold as medicine until the 1740s, alicorn powder was likely actually made of ground narwhal tusks. 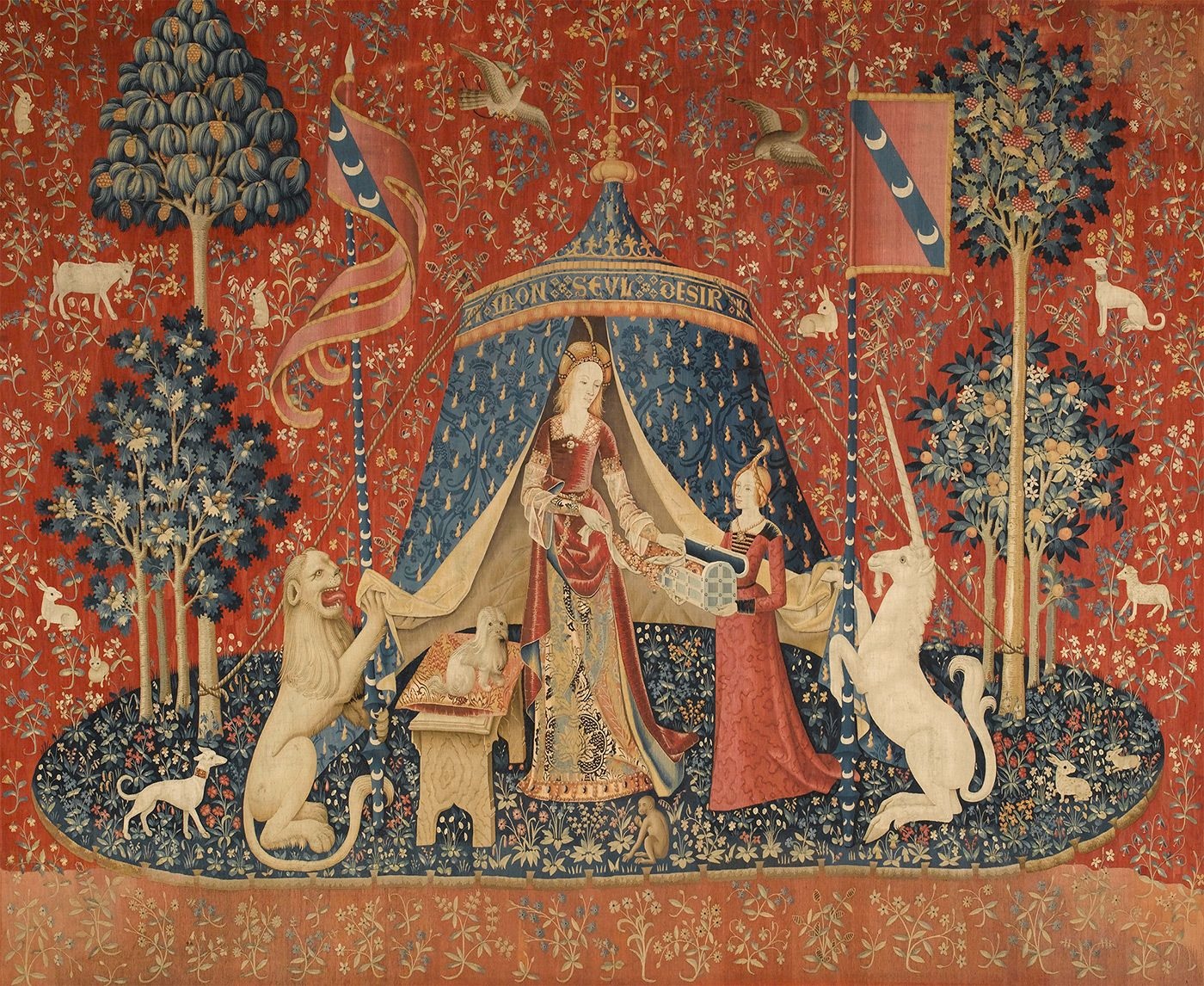 After the titular unicorn learns she is the last, The Last Unicorn cuts to its opening credits sequence. This lifts imagery straight from La Chasse à la licorne, in its medieval-style lions and enchanted fountains. Unlike Legend, however, it is the unicorn that will save herself, although with the aid of mortals. Moreover, unlike the Lord of Darkness, King Haggard does not want to bring darkness into the world by destroying all the unicorns. He wants their pureness and beauty for himself alone.

Like the tapestries from which they both draw inspiration, Legend and The Last Unicorn tackle the trials and tribulations of courtly love and beguiled lovers. The drama tests Lily and Jack as the Lord of Darkness takes advantage of that selfsame love. Lady Amalthea begins to lose her true self as she falls in love with Prince Lír. We know a sacrifice is the only likely outcome for our star-crossed couples. 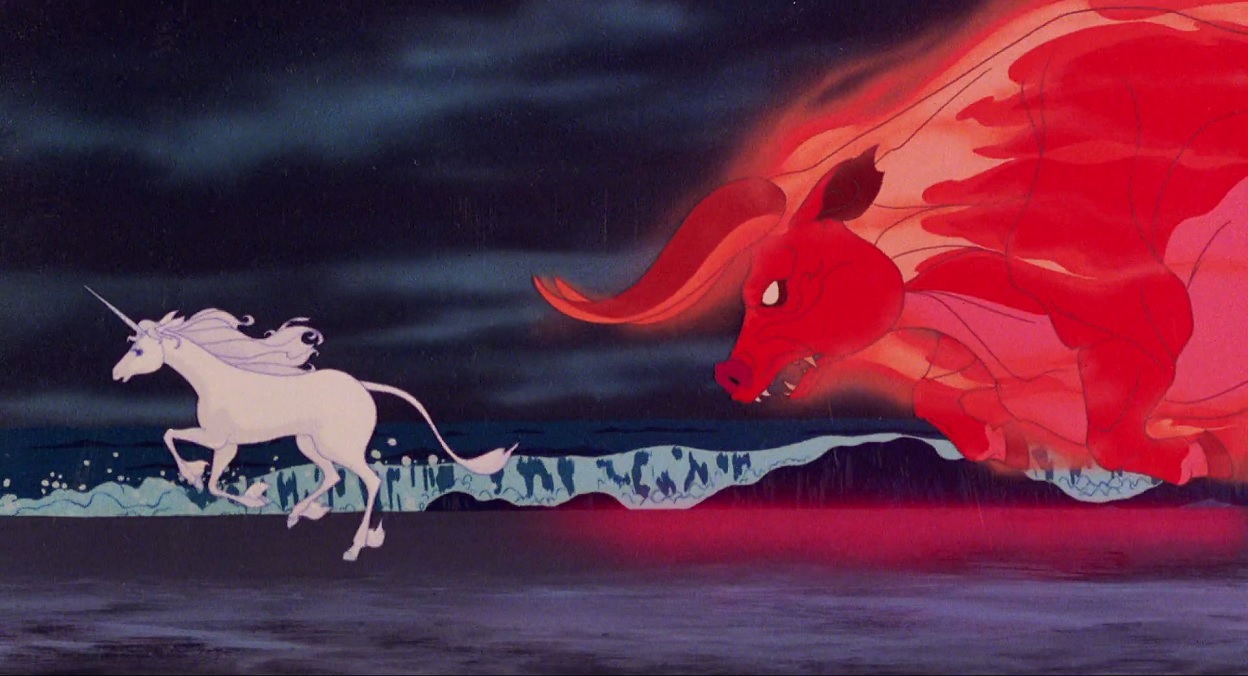 Both films also challenge the idea of unicorns only being safe amongst virginal women. In Legend, Jack is the keeper of the unicorn forest. He is also a Green Man. These figures also trace themselves back to Iraq, India, and even Borneo, with their legends finding their way to Europe throughout the Middle Ages and Renaissance. Green Man figures often appear in Christian churches, despite their Pagan roots. Before he takes her to see the unicorn Jack and Lily make out in a field. A stark cut indicates that they may have done more than just kissing.

In The Last Unicorn, upon first seeing the unicorn Molly Grue laments that she should have come to her when she was young and new and that “it would be the last unicorn” that would come to her. While not pure in a sexual sense, these characters are pure of heart. They help balance out the evil in the form of Mommy Fortuna, King Haggard, and the Lord of Darkness.

Although the theatrical version ends with the reunited lovers running off into the sun, in the director’s cut of Legend, Lily and Jack part ways when they realize they are too different. In The Last Unicorn, Lady Amalthea must regain her unicorn form in order to free her people and defeat the Red Bull. This of course means leaving Prince Lír. He will live on through her memory, while she has learned regret. Everyone is forever changed.

Like the tapestries that entwined Pagan and Christian mythologies, these two films subvert medieval tropes about sexuality and purity with fresh takes on what it really means to be pure at heart.