When a blockbuster arrives in theaters the film’s stars do press, including the late night circuit. That’s just Hollywood Promotion 101 and everyone does it. Those interviews tend to blend together and aren’t particularly noteworthy. But super nerd Stephen Colbert didn’t just want to speak to Dune‘s young stars from the comfort of his desk. He wanted a more immersive, more authentic conversation. So he spiced up his talk with Timothée Chalamet and Zendaya by speaking to them on Arrakis.

Forget couches and an air conditioned studio. Stephen Colbert opted for sand and heat when he welcomed Dune‘s two young stars to the show. Okay, so maybe he didn’t actually meet them Arrakis. It was a green screen. But The Late Show did commit to the bit by having the sound of wind play throughout the lengthy interview. An interview that was also long on insight and fun. Chalamet and Zendaya have just as much chemistry off-screen as they do on it, and they clearly enjoyed talking about making the movie and working with one another. 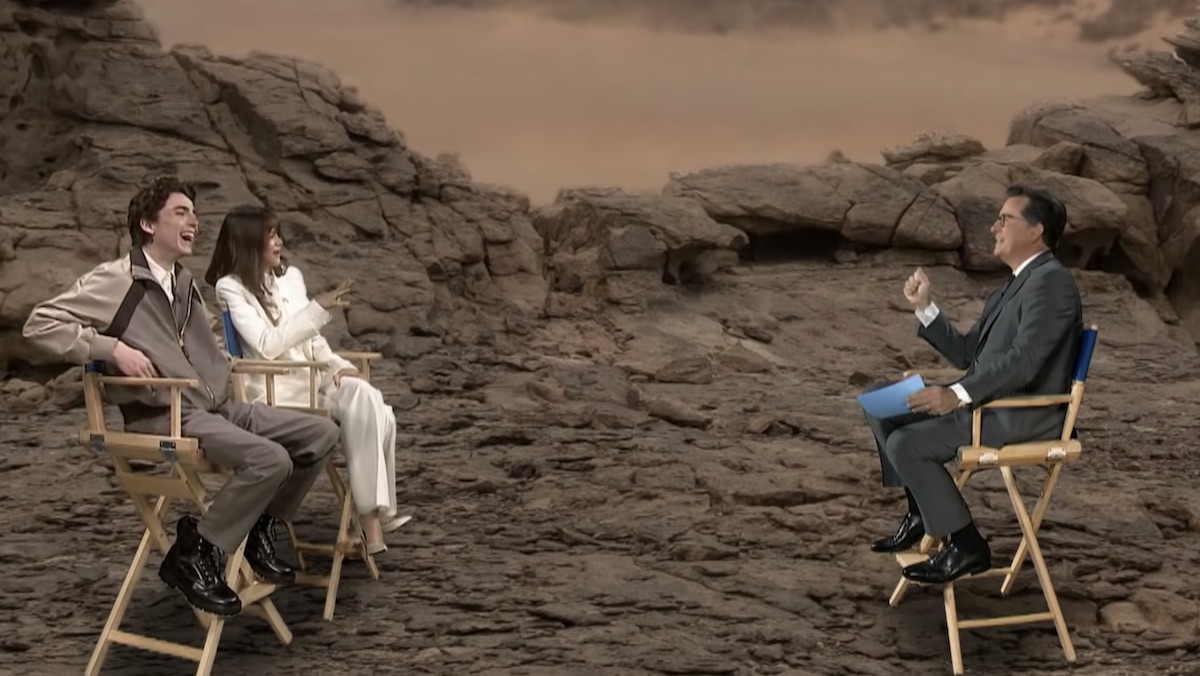 Our favorite highlights include Zendaya saying she was nervous at her audition. But for a very strange reason: she feared dry socket (which Chalamet knew nothing about) after getting her wisdom teeth out not long before the audition. Director Denis Villeneuve really should have reminded her fear is the mind killer. Though from the sound of, it his stars had no complaints about working with him. Just the highest of praise.

The two stars also discussed chafing and how the suits that cooled the characters did the opposite for the actors. And they mentioned how they made fart jokes to ease the tension on set and handle the pressure of filming.

They also played a way-more-entertaining-than-you’d-imagine game called “Duner Or Later.” Colbert quizzed them on whether something or someone was older or younger than Dune.

Asking about dune buggies is impossibly funny. And yet not as funny as Colbert asking about himself.

Of course, Colbert also wanted to know the most important question: will there be a second part? Even Chalamet and Zendaya don’t seem to know for certain yet. But since they’re already on Arrakis they should probably just start filming now to get the ball going. The sequels must flow. Two of them at least.

But if (when, really) it does happen, someone please remind super nerd Stephen Colbert that if he interviews the cast from the sands of Arrakis you can’t walk around normally. That’s how you attract sandworms.