Some films are obviously Christmas movies, like The Polar Express and Scrooged. But for others it’s not so clear cut. They may be set during the holiday season, and they may even touch upon Christmas themes, but does that mean they truly qualify in the traditional sense? To find out, we’re putting these movies on trial and laying out all the evidence for and against them by answering some pertinent questions, like we did with Die Hard, Gremlins, and Edward Scissorhands. And after already examining if Shane Black‘s Iron Man 3 deserves a permanent spot in the holiday rotation, there’s no better movie to enter into the great Christmas movie debate than his directorial debut, Kiss Kiss Bang Bang.

Members of the jury, ask yourself…

How much of the movie takes place at Christmastime?

The entire movie takes place at Christmas in Los Angeles where it’s warm enough people are swimming in December. It’s, uh, not a winter wonderland. It’s definitely the holiday season though. Tinsel Town is full of traditional decorations throughout. Festive lights are strung everywhere. Christmas movies are on TV. There is also plenty of…..uh, unique holiday cheer. We see a naked woman in a glass case painted up like a reindeer. There’s also a “sexy Virgin Mary” we bet the studio still gets letters about. 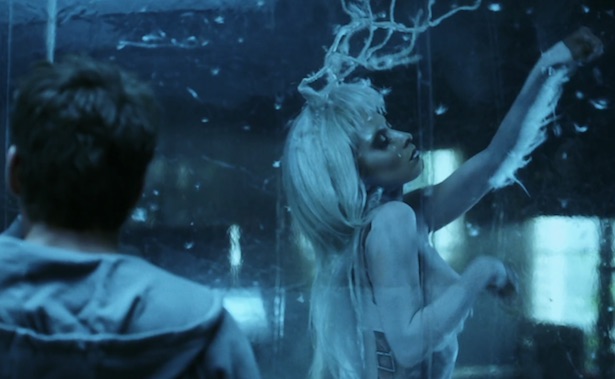 Would the movie be fundamentally different if it were set at any other time of the year?

Not at all. The Christmas elements are just set decoration. Also, none of the characters’ references to the holiday season mean anything. They merely contribute to giving the movie a place on the calendar. Even the toy store robbery that led Robert Downey Jr.’s Harry to that fortunate screen test could have been done for a birthday gift rather than a Christmas gift.

The biggest change would be how out of place Michelle Monaghan’s outfit would be for a quarter of the movie. 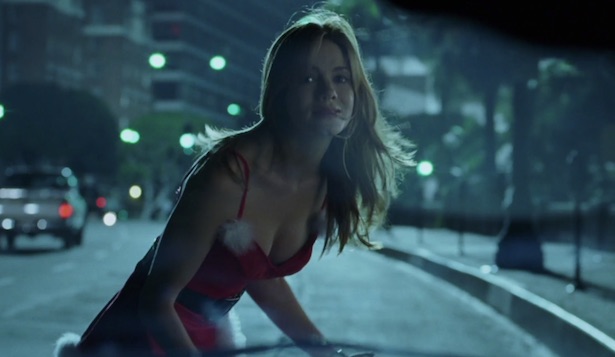 That freaky Hollywood sex party with the human decorations would have been even weirder too.

Do any of the major themes apply to Christmas?

At the end of the movie, Harry says the movie is about friendship, but saying that’s a recurring Christmas movie theme might be playing loose with the spirit of the question. Normally that idea in Christmas films is “goodwill towards others,” not specifically friendship, but you can make that stretch if you want.

Family is another holiday theme. Thanks to two of the worst fathers ever though it’s mostly about how messed up and destructive family can be. That’s not exactly traditional Christmas fare. The film also touches upon the destructive forces of greed. Harry’s friend is shot during a robbery and all of the bad guys in L.A. are killed. Don’t be naughty, right?

There are two other major, though less themes, and they can be found in any Christmas movie. One is imagination. Harmony believes in the idea of the fictional detective Johnny Gossamer like a kid believes in Santa. The other is having faith you will one day get what you want if you believe in it enough.

Does watching it at Christmas time enhance the experience?

No. The Christmas elements feel shoehorned in rather than being an organic part of the story. There’s really no connection between the movie and the holiday. It might make more sense to watch it at any other time of the year. At least then your viewing experience will mirror the strange relationship the movie has with Christmas.

Has it been accepted as a Christmas movie tradition?

Maybe by swingers and murder enthusiasts, but not anybody else.

If only it were possible to give the movie extra Christmas bonus points for giving us the gift of national treasure Val Kilmer’s Perry, but it doesn’t work that way. While you can make some thematic connections between the movie and classic Christmas ideas, ultimately the film only uses the holiday as pretty window dressing. (And sometimes for sexy, borderline inappropriate window dressing, but that isn’t helping its case.) It isn’t any more or less fun to watch it in December, and it’s not exactly a staple of the season.

We really want a film where a dog eats a guy’s finger and a coffin rests on an overpass sign to qualify. Unfortunately the clues don’t add up for Kiss Kiss Bang Bang to be a Christmas movie.