This is one of those fancy app-driven board games. But don’t fret, for it’s not an entirely new concept fraught with bugs or precarious budding concepts. No, this is Lord of the Rings by way of H.P. Lovecraft, or more accurately, it’s a Fantasy Flight Games big box adventure game driven by the electronic DNA of Mansions of Madness 2nd Edition.

It’s a game as we’re used to, with many tiles–amusingly oddly shaped–plenty of cards, and even a nice selection of plastic Middle Earth miniatures. You will journey around an expanding area as you explore the countryside, encountering people and places and battling orcs and undead. It’s an adventure game in the same image as Talisman or Runebound or the recent Fallout board game. It does have the marked distinction of being a fully cooperative design.

These types of games are wonderful as they give a wide scope condensing miles of travel to mere turns. They tend to be very content driven, typically relying on huge decks of cards and grabbing many hours of your time to complete an epic tale. Journeys in Middle Earth is an attempt to smooth some of these quirks and provide a more immersive experience. Its weapon is one of the 21st century. 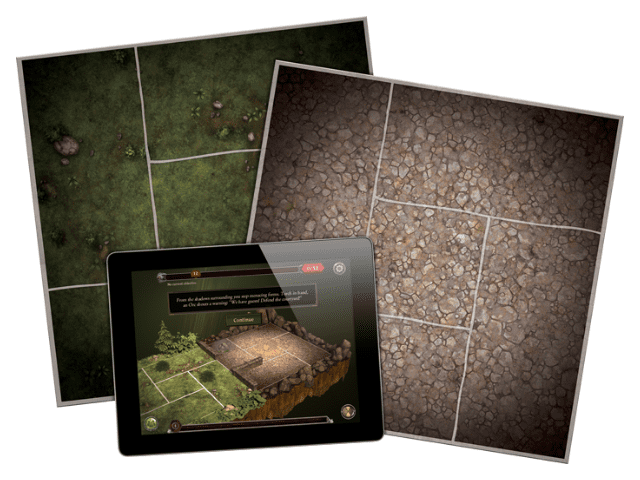 The free and necessary application is a pretty substantial iteration of the Mansions of Madness 2nd Edition version. The flow of game play is also similar, as you explore new tiles and populate them with points of interest–denoted by generic tokens. Instead of a stream of event cards or an encounter deck to plod through, the app spits out bits of story and prods stat checks. This is where the game really gets a mind of its own and seeks separation from its influence.

There’s a strategic layer that’s pretty enticing. Each character has a deck of cards built from several sources. Everyone receives a set of basic actions, as well as five for their character and three for their class. This notion of role is as it sounds, it’s very much a D&D-inspired occupation for your character to embody. There’s the Captain who is great at supporting and leading the group, the Pathfinder that focuses on mobility, the Hunter that wants to dish out the pain, and of course several others that are thematically on point.

This combined deck is shuffled and forms dual purpose. At the beginning of each round you will draw two cards and choose one to put into play. This may be spent at any point later in the game to perform a bonus action or influence a skill test. You can even leave it there for many turns and let your options stack up as each round you add to your tableau.

The one you don’t choose may be placed back on top of the deck or on the bottom. This is of key import because the game utilizes these tiny cards to resolve tests. No, you won’t find dice or anything of the sort, instead you draw a certain number of cards from the top of your deck and look for success symbols. Some feature a stoic leaf which allows you to spend Inspiration and convert them to successes. Inspiration is primarily attained from exploring, but can also be acquired through different events and in-game triggers such as pursuing side quests.

This card system is very solid. It’s not as dramatic as a dice pool, but it affords a more strategic layer to the game. You will manage your odds and struggle with micro decisions of keeping great cards versus placing them back on top to ensure success on the next test.

The deck is also tweaked slightly during play as certain story outcomes can add dead “weakness” cards to your allotment. Between scenarios you will spend experience you have earned to add better options and more varied abilities. You have the choice to even change to a new class and pursue alternate vectors during your character growth, ultimately resulting in a multi-class system that’s keen and certainly interesting. 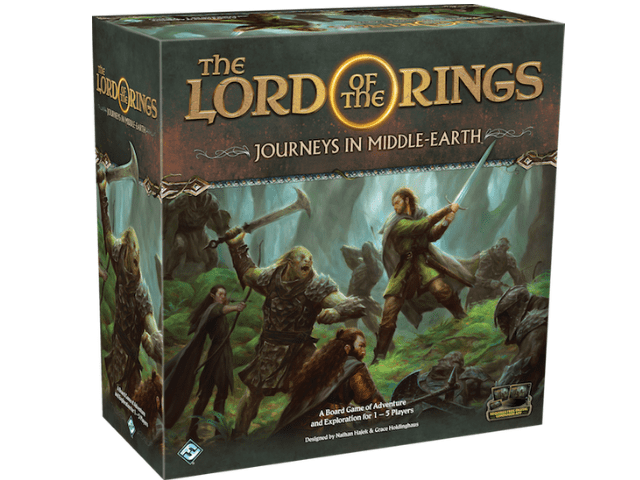 Ultimately this type of content-driven game is heavily dependent on said content. The writing here is decent although not quite special. There’s a somewhat bare feel of Middle Earth which suffers due to operating in a time period outside–or rather between–the established fiction. The pace of the narrative and context for your action is adequate, but the decision to include a mixed cast of established protagonists detracts from the design’s potential. Just as Peter Jackson’s take on the trilogy feels a step distance from its source due to numerous tweaks and uncharacteristic shifts, this feels one step beyond even that, resulting in a developed fiction two degrees removed from its source material. This doesn’t snuff the whole thing out, but it does pose a challenge you must grapple with.

Variability is also a concern. Each scenario is randomly generated from an uncountable bushel of options, but the general feel is similar. The card system does provide a bit of a prod towards replaying the campaign and tinkering with new builds, but it’s only one facet of play and not the driving force. The format does offer two distinct scenario types of the more common overland adventure and a small skirmish on two boards with a touch of terrain. This helps vary the experience and present new challenges, but those hoping for the depth of a well-rounded or intricate skirmish design will not find it here. 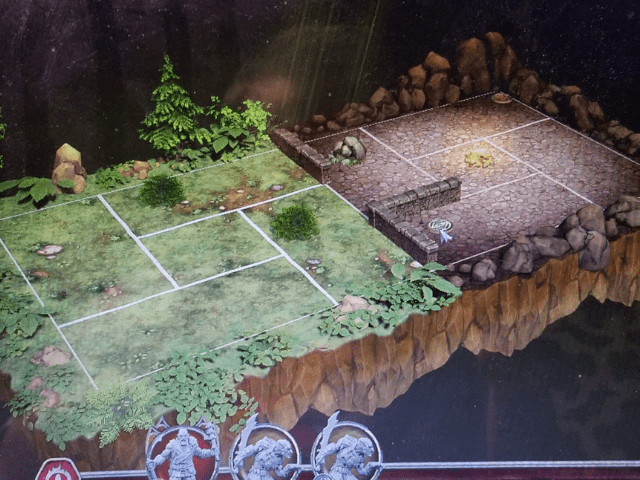 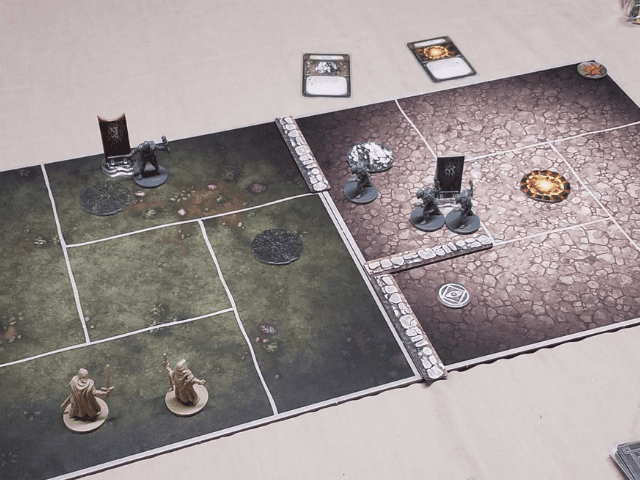 This is a very prudent iteration of the Mansions of Madness experience with its own sense of atmosphere. The game system is a touch more complicated, although still pretty light, and it feels generally smoother in terms of how it handles enemy attacks and tests in the app. Those who abhor a phone or tablet interfering with their cardboard play will certainly not be converted here. Nearly every action in the game requires input into the device and translating that feedback to the group. Unsurprisingly, it works quite well as a solo endeavor as it’s very easy to handle two heroes and keep up with the flow of play.

The focus on the campaign format is a boon. It helps provide distance from other similar adventure titles and it also manipulates the incentive structure a bit. In addition to earning experience for completing the mission, you can earn lore for resolving side-quests and triggering events. Lore is later spent to upgrade your equipment which is a joy. This smooth system offers incentives such as trekking to that shrine at the Northern edge of play instead of following the bandit’s trail Eastward. It also provides reason to split your party at times which means everyone has something to do at larger player counts. 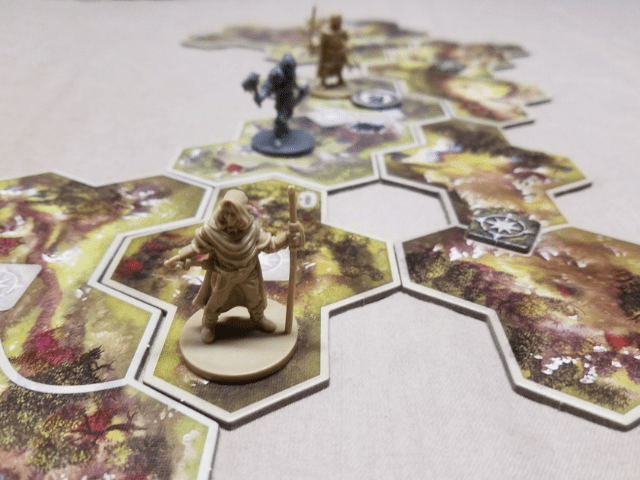 Overall, the app-based play is an improvement upon Mansions of Madness’s formula. There’s a general sense of refinement in systems and there’s a number of subtle tweaks. It possesses some of the inherent weaknesses of those ported mechanisms as well, such as the inherent lack of variety in enemy behavior. Its forefather has never solved this conundrum and its likely that solution won’t poke its head out of the Shire.

The bottom line is this is a story-driven game of mostly simple mechanisms with a touch of deck management depth. It’s not likely to grab those seeking overarching strategic variation as the narrative is somewhat linear and possesses minimal branching paths in the demo version I have tinkered with. Yet, for those seeking a Lord of the Rings cooperative adventure with a touch of flavor and an exciting heap of potential, this is certainly a design worth consideration.

I feel like I’m parroting my Mansions of Madness mantra, but Journeys in Middle Earth is a very solid design of quality fun, but its legacy is ultimately up to its evolution as a product and how it continues to integrate its technological advantage into future content.

More Lord of the Rings Goodness!