The mighty Vul-Kar is not happy. Decades ago, adventurers stole Vul-Kar’s gem, with some of them being engulfed by fireballs. Now, a new generation of glory-seekers and tourists are back, trampling around Fireball Island, snapping photographs and taking treasures.

In this remake of the classic 1986 game Fireball Island, you’ll manage your hand of cards to move around the 3-D island, scooping up point-scoring treasures while launching embers at your opponents. Play your cards just right and make it back to the helipad before Vul-Kar burns you all.

Your team has landed on Fireball Island, hoping to take photographs at different points on the island and taking any treasures you come across while avoiding the traps, hazards, and fireballs that reign down from Vul-Kar.

Movement and special actions are done through your hand of cards. On your turn, play a card to move and perform its optional action. Depending on the action you perform, you may collect one or more treasures, launch ember marbles down the island, or steal treasures from your opponents. If somebody steals from you, you’ll receive a consolation souvenir, which may help you during later turns.

If somebody plays a cataclysm card, then fireballs are launched from the mighty Vul-Kar. After every three cataclysms, a marble is placed into Vul-Kar’s Scar. The game ends when a fourth marble is placed into the Scar or when a player has taken photos at three different points on the island. All players then have only two turns to get back to the helipad. Each player who returns to the helipad safely will score all their treasures and snapshots. However, if they did not return before their second turn is over, then only score their treasures and not snapshots. The most points wins. 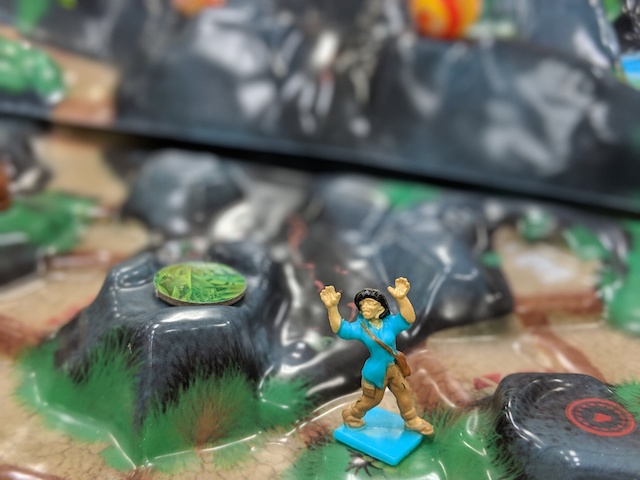 There’s something to be said for the pure joy and carefree fun of Fireball Island: The Curse of Vul-Kar. It’s not a deep strategy game, nor is it meant to be. You’re galavanting around the island trying to score points and launch those fireballs and embers at your opponents.

Thankfully, it’s not a pure luck-fest, either. You can plan your movement ahead of time, opting to use your souvenir cards to maximize your turn or hinder your opponents when the opportunity presents itself. And your dexterity skills come into play whenever you launch the ember marbles onto the pathways.

The turn structure, set collection scoring, and steal mechanisms are the right choices for a lightweight game; both newbies and hobby gamers can learn the rules and scoring quickly. Everything is clearly explained on the cards.

Fireball Island: The Curse of Vul-Kar captures that feeling of childhood game-playing; it’s flat-out fun for the entire family. Restoration Games has wisely replaced the dated mechanism of roll-and-move with a modern hand-management style of play, but the focus is still on that spectacular 3-D island and those marbles rolling down towards you and your opponents. And with expansions that add a pirate ship, bees, a leaping tiger, snakes, and a very familiar-looking boulder to the action, there will never a dull moment playing Fireball Island: The Curse of Vul-Kar.

What are your favorite adventure games? Tell us in the comments!