What Is JOJO RABBIT Actually Satirizing?

At some point between the inception and the release of Jojo Rabbit, the phrase “anti-hate satire” was born and thusly situated as a mainstay of the film’s marketing campaign. As we may presume that it was the escalation of active Nazism to the forefront of public consciousness that inspired Taika Waititi to develop the project in the first place, we can likewise guess that that it was this same swelling threat that inspired the necessity to underscore the fact that Jojo, a comedy about Nazis, was not taking its subject matter lightly. This assurance took the form of the aforementioned tagline adorning the film’s every poster and trailer, understood to alleviate all concern about what Jojo Rabbit would be setting out to convey. But what exactly does it mean to satirize hate?

It would ultimately prove telling that the advertisement of Jojo Rabbit was not founded on a more specific message, as specifying a message is precisely where the film itself flounders. Hate is bad and Nazis too; no one will walk away from Jojo believing it alleges otherwise. But even (or especially) in times when the alternative is treated less and less like fringe bigotry, it doesn’t do much good to rely only on platitudes so broad. 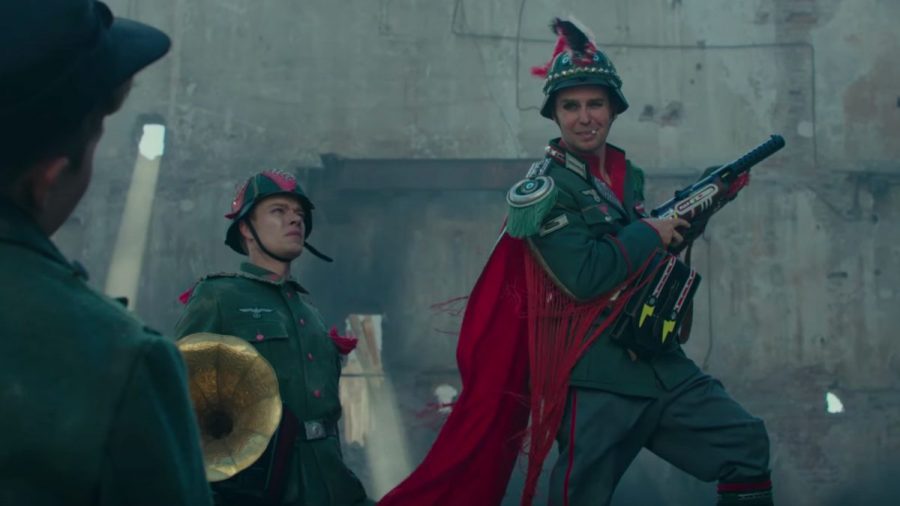 Broadness is a staple of satire—a natural byproduct of the enhancement and magnifying of a subject’s essential follies. Such is what Jojo Rabbit renders of Nazi Germany, mining comedy from a falling Third Reich’s ineptitude (showcasing clumsy child soldiers and “paper-like” uniforms) and eccentricity (by way of cloning experiments and didactic Gestapo officers).

Cutting a layer deeper, Jojo Rabbit indulges in the most absurd caliber of anti-Semitic propaganda. The fanatical ten-year-old for whom the film is named embraces fables of Jews as monsters who lay eggs and read minds; an added dose of humor comes from the fact that many of these stories are fed to him directly by a droll Jewish girl whom Jojo’s mother is secretly keeping safe in a hidden room upstairs. Silliest of all is the film’s management of little Jojo’s adoration of Adolf Hitler himself, who takes form as the boy’s waveringly affable and supportive imaginary friend, played with utmost goofiness by Waititi. 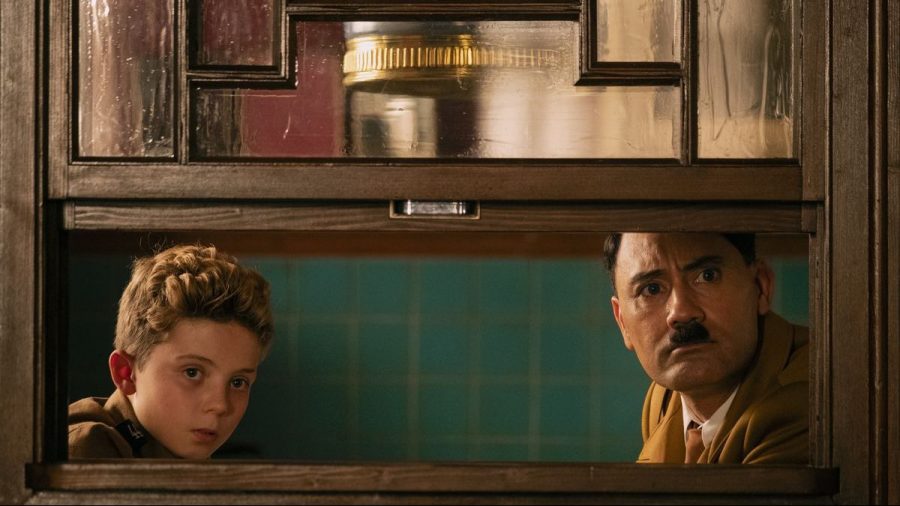 All this is to say that, per the implication of every ad branded boldly with the word “satire,” Jojo Rabbit relegates its featured time, place, and people to abundant ridicule. But fatefully excised from this equation is the hate that every poster and trailer would have us believe it really undercutting. What Jojo Rabbit ends up satirizing is the method, not the idea.

Sharing a stage with bumbling Hitler Youth counselors and cartoon violence is a young boy corroded by a deep, despicable, and familiar hate, the heart of which is predominantly left alone by the film’s whim to satirize, with the details of said hate bearing the brunt of parody. The fundaments supporting the most fanciful ideation of Jojo’s anti-Semitism, those involving egg-laying and mind-reading, are cornerstones of a narrative that has waged enmity against Jews for eons: that we are different, objects of disgust, and not to be trusted. 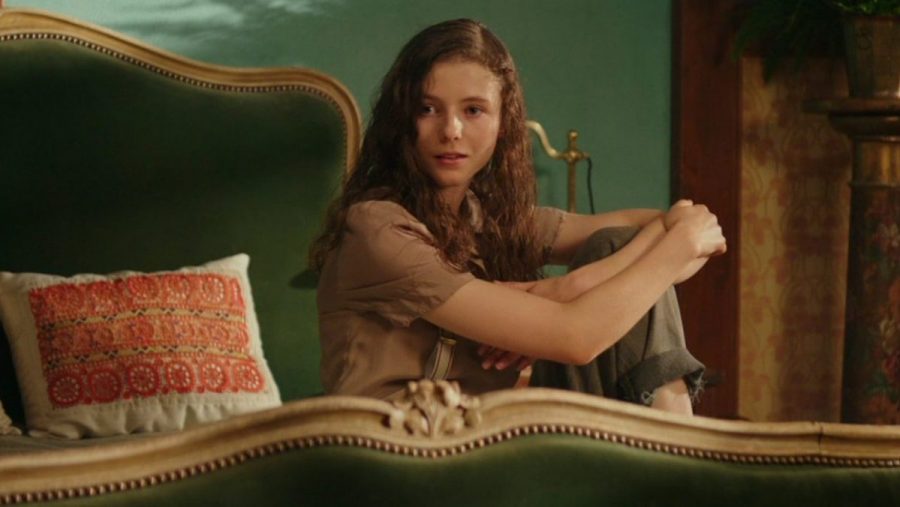 This code of anti-Semitism is not unique to the Axis-occupied Germany of Jojo Rabbit’s display, nor to the thriving generation of Nazism that evidently warranted the production of such a film in 2019. Hate like Jojo’s, manifesting with embittered barks of the word “Jew!” as if it couriers an intrinsic toxicity, has spotted the whole of space and time in between. It seeped its way into the hearts, minds, and mouths of so many of my own friends growing up (the sort willing to keep a Jewish pal or two but not above decrying “the problem” with Jews en masse) that it wouldn’t be until adulthood that I even registered this language and behavior as what it really was.

It feels just as real when spouted by an adorable and ostensibly sympathetic ten-year-old boy, even one altogether surrounded by the fibers of parody. But it is only through the false and fantastical that Jojo ultimately finds his way to the side of love, developing stop-motion butterflies in his stomach—and, as we’re meant to estimate, an overall tolerance for the chosen people—thanks to close proximity to a cute Jew. Charming though the pair’s rapport may be, it doesn’t set a solution to Jojo’s intolerance, nor a message about the journey through and beyond, or moreover on the receiving end of, bigotry. (I’m a cute Jew and it didn’t do much to reform any of those guys I grew up with.) 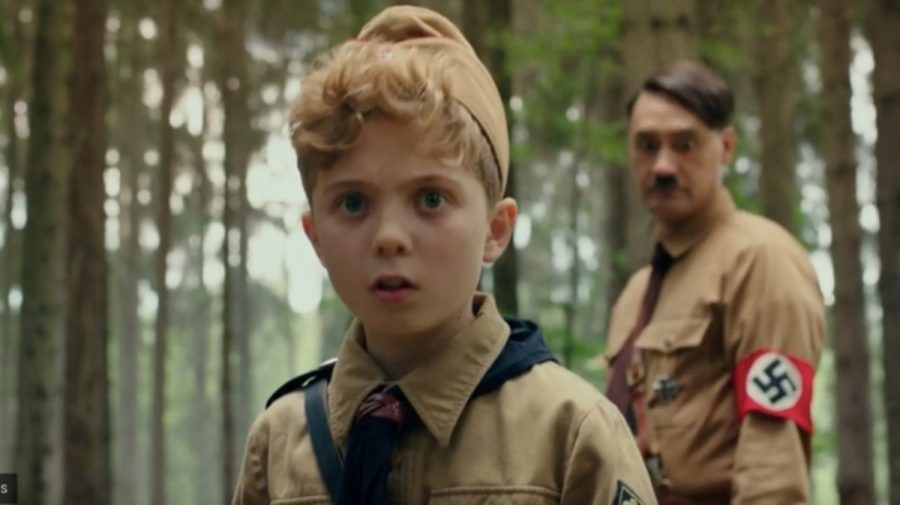 In the end, we’re expected to accept that reformation has found not only Jojo, but also his once brash Hitler Youth supervisor and his wunderkind soldier best chum, leaving the lot distinct not simply from my schoolmates but from the objects of mockery lining a history of more successful like-themed send-ups. Closing out a third act that unveils both the harshest this version of Nazi Germany is willing to get (the hanging of Jojo’s mother) as well as the softest (the kindly turn of Jojo’s aforesaid mentor), Jojo draws his Jewish friend Elsa into the newly liberated streets, ditto into his newly liberated heart, backed in both regards by David Bowie’s German recording of “Heroes.”

Ultimately, Jojo evades undoing at the hands of his own intolerance, just as his intolerance evades undoing at the hands of ridicule and caricature proper. “Anti-hate satire” or not, what we’re left with is the story of a young boy who starts out filled with hate and ends up rid of it, having apparently shed the tethers to his erstwhile all-consuming anti-Semitism thanks alone to a convenient crush. We’re encouraged to forget how it felt to spend 110 minutes in the company of a doe-eyed hero-in-the-making whose barks of “Jew!” sounded just like those of kids who didn’t benefit from the epiphanies of a preteen interfaith love affair. We’re made to recognize the hate, to laugh around but never too close to it, and to understand it as a terrible threat that will probably work itself out one way or the other.

Somewhere in there is the message Jojo Rabbit really wants to convey, but I can’t find it.