Our favorite celebrities are fellow nerds who also love Dungeons & Dragons. And we’ve been lucky enough to have some of them in to play with us. Brooklyn Nine-Nine‘s Terry Crews stopped by for a session of “CelebriD&D,” as did Game of Thrones‘ John Bradley. The Fast and the Furious star Vin Diesel also rolled some 20-sided die with us. But the most dedicated D&D player to ever join us was Joe Manganiello. The actor has not been shy about professing his absolute obsession with the RPG. It’s something he has in common with many more famous faces. Manganiello’s personal game is loaded with other big names. And as a new video of his home game shows, it’s officially cool to love Dungeons and Dragons.

Variety got an inside look at the formation of Manganiello’s current two-year campaign “The War of the Dragons.” He’s the Dungeon Master for a game that includes some giant celebs. Literally. WWE star Paul Wight, also known as The Big Show, is a member.

The idea of Joe Manganiello and The Big Show playing D&D with a bunch of randos would be the greatest thing by itself. But they are also joined Rage Against the Machine‘s Tom Morello, who also brought Vince Vaughan and Game of Thrones co-creator D.B. Weiss into the game. (Weiss, in turn, also brought along David Benioff.) Previously, Guardians of the Galaxy director James Gunn and former Saturday Night Live star Taran Killam also played. And thanks to Zoom, the group has managed to continue the game during the COVID-19 pandemic.

Pull up a chair & grab your dice as Alex Stedman & Variety pull the curtain back on my ultra secret weekly Dungeons & Dragons Campaign...https://t.co/LNams1Hts7

But we’re not jealous of this campaign because it’s full of famous celebrities. (Well, we are a little bit.) We’re jealous because it takes place in Manganiello’s absurd “dungeon” basement. Not only is it adorned with D&D inspired decorations, he has every map and figure you would ever need for a totally immersive session. Look at this insanity! We don’t even own striped weasel miniature of any color! 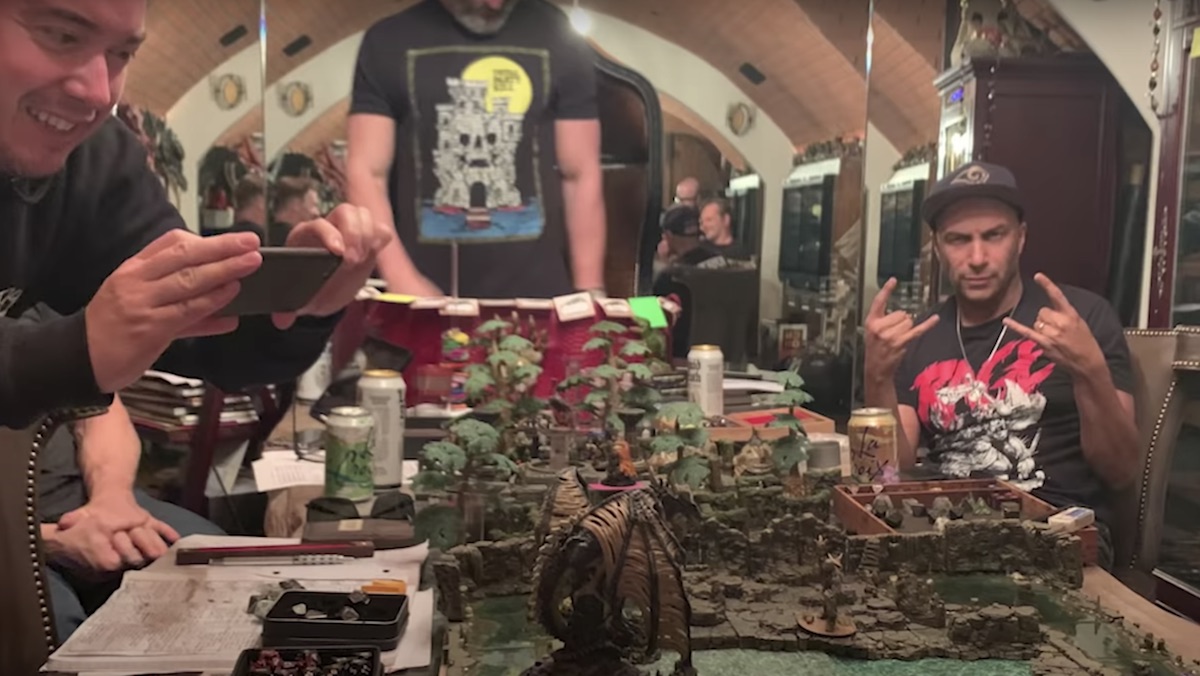 We also don’t have Tom Morello to play music when we enter a tavern with a bard. Or Paul Wight to remind us just how big the realm’s own giant is. But we’d love to find out.

Anyone know if there’s an opening in the game?