The world of comics continues to expand and become more diverse. Women like Nilah Magruder, Eve Ewing, Stephanie Williams, and Roxane Gay are taking over the Marvel universe and bringing fresh takes on an array of Black comic characters like Ironheart and Monica Rambeau. The rise of webcomics and independent publishing has also opened doors for many women comic creatives to distribute art with lower barriers of entry.

These women stand on the shoulders of Jackie Ormes, the first Black woman cartoonist and creator to have her own comic strip. Her rise to comic fame is a story that comic lovers should know.

The Beginnings of an Artist

Ormes, born Zelda Mavin Jackson, grew up in and around Pittsburgh, Pennsylvania. She began writing and drawing during high school, eventually becoming the arts editor for the Monongahela High School yearbook in 1929. Her early sketches of students and teachers were the foundation of her later cartoon works. She graduated in 1930 and by this time Ormes was covering boxing matches for the Pittsburgh Courier, a widely popular Black newspaper. Her time with the Courier included stints as a proofreader, editor, and freelance writer. Ormes loved covering different social subjects, but drawing was her ultimate passion.

A Career in Cartoons

On May 1, 1937, Ormes’ first comic strip, Torchy Brown in Dixie to Harlem, made its Pittsburgh Courier debut. The paper had editions in several cities, so her work began to catch the eyes of readers around America. (Her pen name was not Jackie Ormes at this time.) The funny comic’s titular protagonist was a Mississippi teen who found fame singing and dancing at the Cotton Club.

Torchy Brown’s migration from the South to New York City was similar to many Black Americans’ journeys during this time period, as they left home for a less oppressive environment. The strip ran until April 30, 1938, almost a year to the date, before suddenly stopping for unknown reasons.

A couple of years later, Ormes made a move to Chicago. She began working for The Chicago Defender, a leading Black weekly newspaper. The paper ran her Candy comic, about a pretty and funny housewife, for a few months in 1945. This being the tail-end of World War II, the comic provided readers some needed humor.

Ormes truly struck comic gold when she made her way back to the Courier later that year. Her new effort, Patty Jo ‘n’ Ginger, ran for 11 years—an impressive feat for a single-panel story. Patty Jo, a socially conscious and lovable kid who spoke on segregation and union strikes, became so popular that Ormes contracted with the Terri Lee doll company to make a Patty Jo doll. Ormes played a role in designing the doll, a natural decision for someone who often infused her comic work with upscale fashion.

The doll became available just in time for Christmas 1947 and broke boundaries in several ways. First, it was far different from most Black dolls at the time, which leaned into mammy and Topsy stereotypes. Like the comic character, Patty Jo looked like a regular Black girl and had several fancy wardrobe options to boot. The Patty Jo doll also became a hit with both Black and white kids during the height of its popularity. Now, the dolls are a hot collector’s item because of their rarity.

The Evolution of Torchy

In 1950, alongside her Patty Jo run, Ormes rebooted her Torchy character by way of Torchy in Heartbeats. The eight-page color comic insert (in the Courier) followed a new Torchy—a woman who went on adventures while seeking love. The strip tackled everything from racism to pollution, with a Black protagonist unlike many contemporaneous portrayals of Black women. Torchy was smart, independent, fashionable, and opinionated, with a clear sense of self. The insert also included paper Torchy dolls with clothing options by Ormes.

The character became a vessel for Ormes to talk about the experiences of Black people during this fraught time period. As Ormes once said in an interview, she didn’t like “dreamy little women who can’t hold their own.”

She certainly was a person who held her own. The ’30s, ’40s, and ’50s were a time of racial segregation and limited work opportunities for women—especially Black women. Some professions like journalism and comics were heavily dominated by men, while the majority of women remained homemakers. 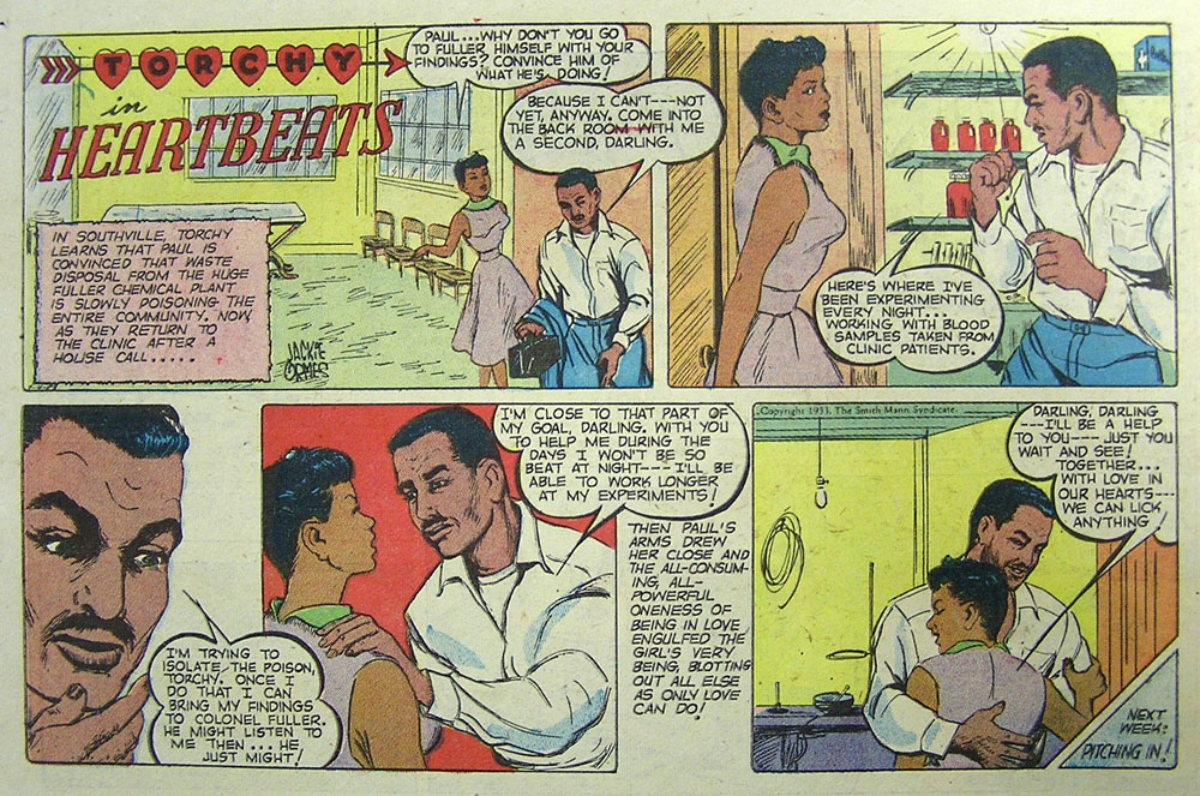 Ormes becoming a journalist and also getting into the cartoon space was a huge leap outside of societal boundaries. And she did it with characters that resonated with people, specifically Black women and girls. Patty Jo and Torchy were free thinkers who faced realistic threats to their existence like racism and sexism; however, they still kept their optimism and determination.

Ormes retired from cartooning in 1956 to pursue the next chapter of her creative life. She would create murals and portraits, and she later served on the founding board of directors for the DuSable Museum of African American History in Chicago. She also became a doll collector, with over 150 dolls in her possession. Ormes died from a cerebral hemorrhage on December 26, 1985 at 74.

The Ormes Society, an online group promoting Black women in the comics industry, was formed and named after the trailblazing creator. The group formed in 2007 with artist Cheryl Lynn Eaton at the head. Eaton wanted to bridge the gap of comic book diversity and support Black women creators and fans. The Ormes Society temporarily ended in 2015, but came back the following year.

Jackie Ormes was posthumously inducted into the National Association of Black Journalists Hall of Fame in 2014 and the Will Eisner Comic Industry Eisner Award Hall of Fame as a Judges’ Choice in 2018. Her work is currently a part of the Library of Congress’ women illustrators and cartoonists exhibit. In 2016, her hometown of Monongahela honored her with a historical marker. 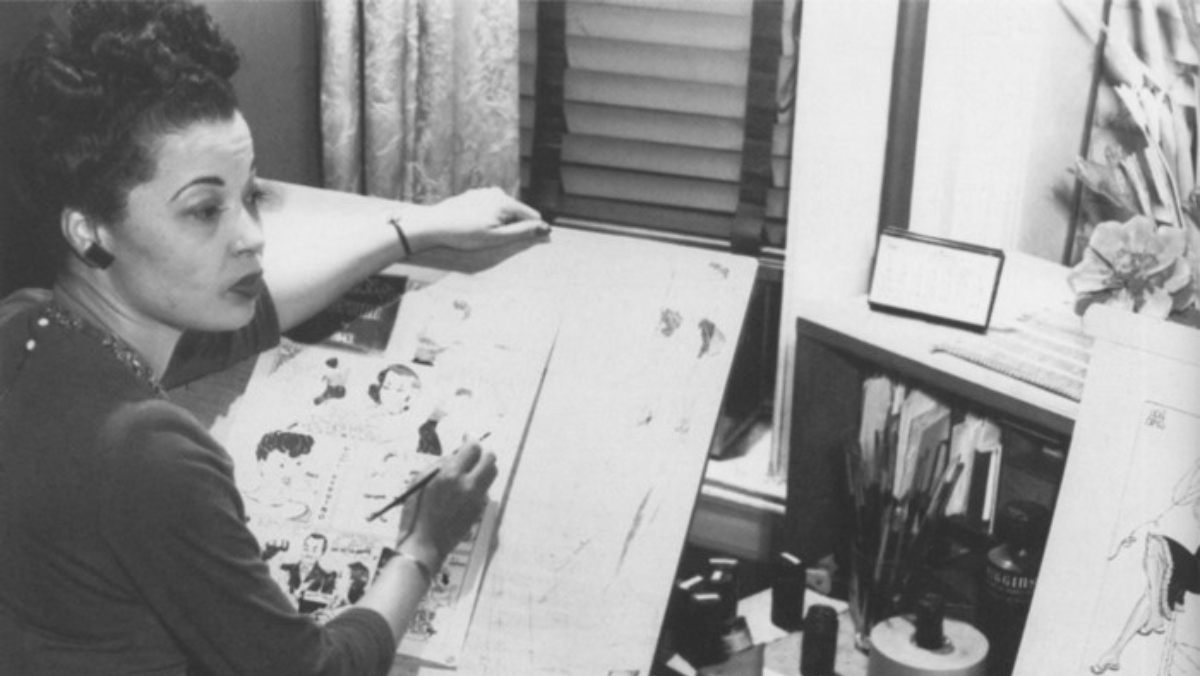 A September 1, 2020 Google Doodle paying homage to her work brought further attention to her story, prompting a new generation to learn about her contributions. Additionally, a Jackie Ormes/Torchy Brown documentary is in the works to highlight her life and comic contributions. A biography, Jackie Ormes: The First African American Woman Cartoonist, written by Nancy Goldstein, details her accomplishments.

Jackie Ormes used her talent to break barriers and provide necessary social commentary from a Black woman’s perspective. Her combination of humor and candid conversations about Black life came through authentic and intelligent depictions of Black women and girls. The path she set forth continues to grow with more stories about, and by, Black women coming to the forefront.

Who Is in The Abomination’s Therapy Group on SHE-HULK? Their Comic Origins, Explained