Keeping Up the Pace with Runbow: Interview with Dave Proctor - Nerdist

Keeping Up the Pace with Runbow: Interview with Dave Proctor

While the Wii U may not have as high a count in independent games as the Xbox One and PlayStation 4, it still has a very reasonable supply, with titles like Affordable Space Adventures and Swords & Soldiers II. But there’s a particular title joining the eShop later this month that will pump gamers up even further—13AM Games’ Runbow.

In this game, players make their way from start to finish across a number of various tracks that can change in the blink of an eye. With new obstacles introduced around every corner and color changes that can take away vital platforms (giving another player an opportunity to take the lead), a win is never a sure thing until the race is over.

To get a better idea of what players can expect from Runbow when it arrives in just a few weeks, we sat down with producer Dave Proctor to discuss the game.

How does the general conception of Runbow work? Is it a competitive running game or something a little bit different?

Runbow started out as a massive local-multiplayer party platformer, but since then it’s evolved into so much more. We began with the idea to have a huge local platform race and a weird color mechanic: as obstacles and platforms disappear into the changing background, they cease to exist. If you can’t see it, it isn’t there. This means that a huge multiplayer race is now way more hectic and unpredictable…and fun! It’s tons of fun for fans of platformers or gaming neophytes alike and you get what you put into it. It can be super competitive or really casual, depending on how you want to play. It is definitely something that we’ve never seen before.

What kind of variety can players expect from Runbow? How many different levels will the game feature in all?

Once we had the core Run gameplay down, we set out to build as much onto this mechanic as we could, and added King of the Hill—which is a crab-bucket-y take on the classic video game staple—and Arena, which is a combat heavy survival competition. We then added ColorMaster mode, which lets one player using the Wii U GamePad drop bombs and environmental hazards on everyone else in a run. This is great for new players that aren’t good at platformers, or to just change up the play from session to session. Then we wanted to make sure that people had things to do without 9 players, and we added Adventure (our 144-level single player campaign) and Bowhemoth (our huge, tough-as-nails, gotta-do-it-in-one-shot platforming challenge) and Online Play (for Run, King of the Hill, and Arena). That’s the order we built the game on it and we’re pretty proud of just how massive and different and replayable it is. It’s hard to classify in one sentence, which I guess means we’re doing something right.

There’s also a Story mode. How does that work? Does the player avoid obstacles or AI enemies, or something different?

In adventure mode players must defeat the evil Satura five times in four of our Movie Poster-themed worlds. They have to navigate some pretty unique challenges and each one unlocks all adjacent levels on the map for players to explore at their own pace. There are enemies to get in your way: Blots, the little creatures conjured by Satura’s imagination to stop Hue and Val from defeating her. They’re there to hone your combat skills and they’re really satisfying to bounce on or punch. The levels are all based on difficulty, so players can try completing everything for a really tough challenge, or try to speedrun their way through the game. Don’t feel like you have to do this alone though; just like Run, you can do all of Adventure with up-to nine people. It’s hilarious. 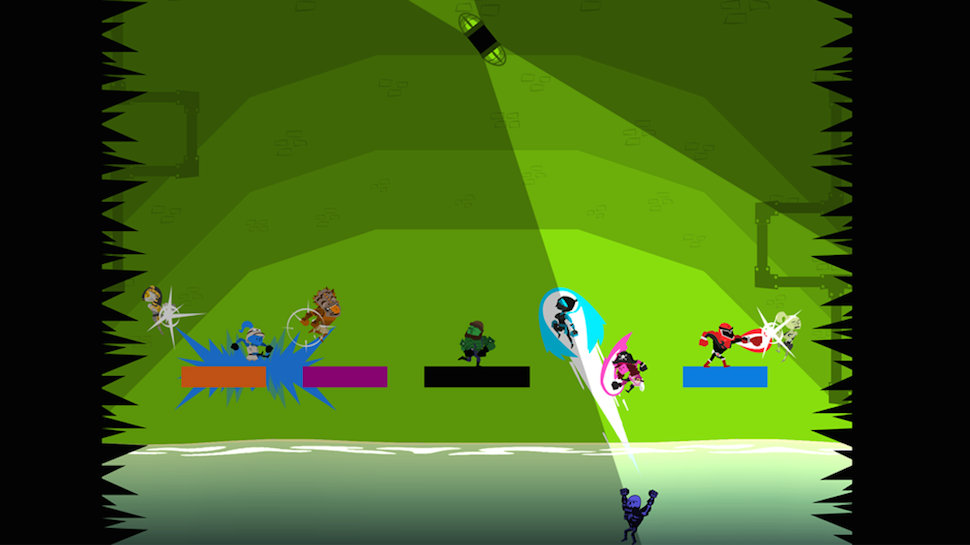 Runbow will include a special gallery where players can unlock certain items. How will this work in the game?

Every time you beat a level in Adventure mode, you get a rating based on your performance. You’ll receive one medal for beating the level, and two or three depending on how good your time was. All of these medals add up and automatically unlock content in the gallery. You’ll get to see characters, costumes, concept art, storyboards, animatics, all things that really show you the nuts and bolts of what went in to Runbow. Also, if you manage to collect all 435 medals, there’s something special in store for you…

Why the Wii U? What is it about this platform that makes Runbow feel right at home?

We always play party games on the Wii U. Whether it’s Super Smash Bros. or Mario Kart or even Super Mario 3D World – it’s the console that’s usually out when we’re all hanging out together. So when we wanted to make this crazy party-platformer hybrid, it seemed like a no-brainer. Also, with the GamePad and the ability for us to get controller inputs from both the Wii Remotes and any Classic Controllers plugged in, it let us make it a nine player game, which is something you can’t get anywhere else.

You released a demo earlier this summer to give players a taste of Runbow. What did you think about its reception?

We are incredibly happy with the turnout! Not just in terms of numbers, but also in watching people upload Let’s Plays and reaction videos—we even got a piece of fan art! It is really rewarding for us to have all of our hard work pay off with actual positive feedback from fans. It’s just made us so excited about the launch.

Runbow launches August 27th. The trailer is below!