In the Game of Phones, You Win or Your Smartphone Battery Dies - Nerdist

In the Game of Phones, You Win or Your Smartphone Battery Dies

Trying to get your teens involved in International TableTop Day (or any game night, really) might result in some epic eye-rolling. But what if you tell them they can play a game with you and not have to give up their smartphones?

With Game of Phones, players are encouraged to pick up their phones and practice their best Google Fu in just 60 seconds to get the judge to pick their selection for what best fits the category on the card. 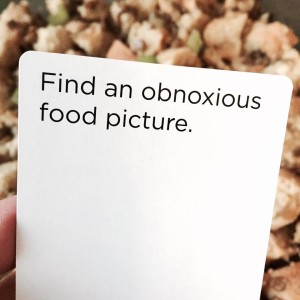 You and your friends will be trolling Tumblr, investigating Instagram, and scrolling search results as fast you can to win over the judge. (Sorry, Grandma, but this one might not be for you.) Here are three reasons to give this twist on Apples to Apples a try.

Category cards unlike any other

From “weirdest Google image search result for your name” to “most cracked screen,” you won’t find category cards like these in any other card game.

And not all cards are just a quick show and tell, adding a unique element of interactivity with the outside world to games of this nature. Trying to be first person to get a “Like” on an Instagram photo or the first player to get a response to a text message from their parents can even add a little suspense to your game experience.

Venture into new territory on the internet

You might think you’ve run out of places on the internet to find something interesting, but with Game of Phones you’ll likely make your first foray into all-new territory.

Never been to Tumblr before? You’re about to be introduced to a whole new world. Okay, depending on your personal preferences that might not be a good thing, but it will definitely be entertaining.

While your older kids or teens might prefer to play games with their friends rather than sit down with you, the unique appeal of the game that might be just the right amount of enticement to spend their International Tabletop Day with you. (Or 30 minutes of it, anyway.)

And with the personal nature of smartphones, you’ll probably be learning something new about each other at the same time. “Show the last photo you took,” for example, might be an awesome and potentially awkward chance to learn about what your fellow players have been up to.

Do you have a go-to game to entice your kids or other reluctant gamers to the tabletop? Let us know in the comments below!