Reality is that which, when you stop believing in it, doesn’t go away. – Philip K. Dick

I have a friend, let’s call her Rachael. She’s always reminding me that we, as a society, are doomed. Doomed because social media has turned everyone into isolated, inorganic boobs. She complains about such things via texts or occasionally, by her FB status. I would like to think that irony is not lost on Rachael.

Rachael’s fears of disconnectedness and isolation are a big part of what makes SOMA so terrifying, even though it doesn’t take place in our world. The new sci-fi survival horror game is available for PS4 and PC and is the latest by Frictional Games, the developers of Amnesia: The Dark Descent.

After hearing about the premise and setting, one could be forgiven for thinking that the game is yet another Bioshock or Dead Space clone, and there are similarities: you play Simon Jarrett, another character that has memory problems after finding himself stranded in an underwater facility with only old voice recordings and other items to fill in the gaps of what exactly happened at Rapture the Pathos II station. There are unspeakable monsters (obviously) and puzzles that even Issac Clark would find perplexing. In the span of the game’s ten-hour campaign, Simon inches towards his objective: survive. But unlike Bioshock  or Dead Space, SOMA hits a little closer to home by substituting the mutants with tech. 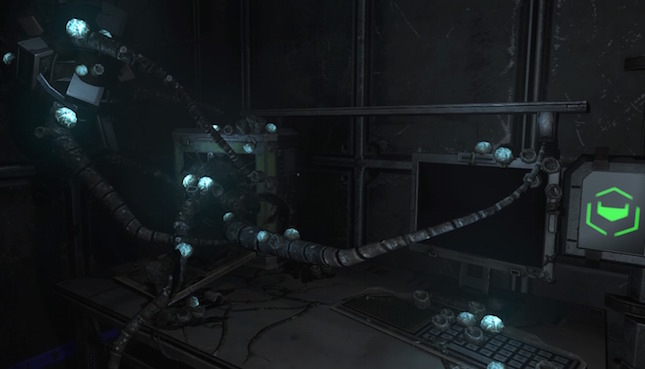 First, let’s talk about the monsters. They are grotesque machines with monitors for heads and lights where eye sockets should be, strung together by black, gooey cables. Most of them speak as if they were people. And you can’t kill them. Ever. Like Alien: Isolation, you are powerless throughout the entire game. You can run or hide, but you’ll never be able to defeat them. Every time they enter an area, tension rises exponentially. These beings are not of the double-stacked jaw variety like H.R. Giger’s xenomorphs, though. They are essentially clunky, confused machines. (Ones that, sure, occasionally want to kill you.) That’s the first hint that something unsettling is going on.

If and when they get a hold of you, death isn’t quite the first thing that happens. Something stranger does. Your perception gets foggy, your sense of audio is suddenly muffled. Somehow just being “touched” by them is more unnerving than the typical violent death. (Although there are plenty of those in SOMA too.) And yet, among all these horrific moments, the best scares are not about getting stalked by crazed machines. 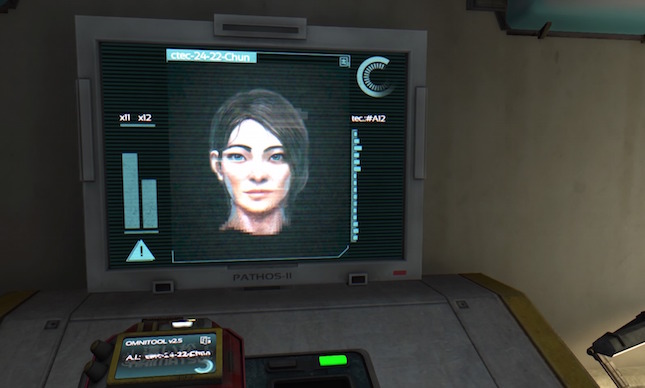 While the monsters are more than creepy and deaths disturbing, it’s the character interaction throughout the game that can be described unsettling. Early in the game, Simon meets up with Catherine, a scientist who wants to help him escape a watery grave in Pathos II. Although the visuals are murky often in the dark, there are no real facial animations. Each exchange with Catherine is a 2D picture that resembles (we assume) what she looks like in real life. In SOMA, every interaction is only through an approximation of a human, leaving you to wonder who you’re talking to… if you’re even talking to anyone at all.

In a way, the central conceit seems to be “more human than human,” which was the Tyrell Corporation’s motto in Blade Runner. And like that sci-fi classic, there are plenty of questions that will linger after finishing. All of it pointing not so subtly at the world we live in now, which is a mark of any great fiction let alone a good horror story. Was my pal Rachael right? Is this where the human race is headed, talking to avatars, but never an actual soul?

Have you played SOMA? Sound off in the comments!