Wager on Intrigue and Hidden Information In CURSED COURT - Nerdist

Wager on Intrigue and Hidden Information In CURSED COURT

Imagine a decadent gathering of the rich and powerful. It might be the court of Louis XIV who held lavish balls even as the peasants starved, Maybe it’s an alien crimelord who likes to flaunt their wealth by putting those who have wronged it by putting them on display as a decoration. It could even be a strange fantasy court of immortal elves or gods who try to understand mortals by emulation their behavior. Plenty of the things one might expect at this court happen as we might expect. The guests whisper to one another. They notice things. They make assumptions based on assumption. Unlike other courts, they wager on whether these intrigues will play out the way they hope. 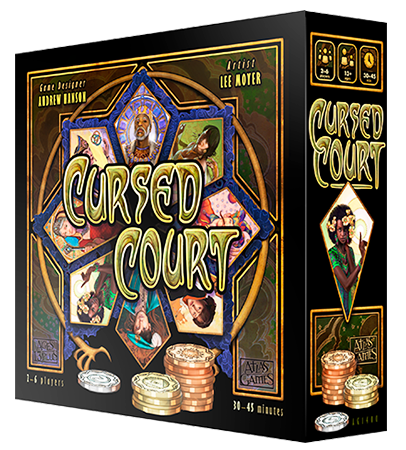 Cursed Court, a board game from Atlas Games, puts players in the center of an intrigue-filled court like this. Players spend their turns wagering on the events going on the court based on information everyone knows and only a privileged few know. At the end of the turn, all the participants in that round’s intrigues are revealed and the wagers pay out in victory points. After three turns, whoever has the most points wins the game.

Play takes place on a lavishly illustrated board featuring the members of the court engaged in intrigues. Artist Lee Moyer makes the illustrations of each noble look like a Tarot card from a long lost set. Each of these illustrations also appear on a deck of cards that is dealt out to each player at the start of the round, and each player has access to two of the hidden cards in play. A single card is also dealt face up so that everyone knows it will be part of the final reveal.

Players then wager on different configurations of cards based on different positions on the board. Sometimes its how many copies of a card are in play. Other times its what combination of courtier cards are out of the deck. Once every player has a bet on the board, the round ends and another card is drawn face up for everyone to see. A new round of betting occurs. Once everyone has four bets on the board, the year is over, the hidden cards are revealed and the bets pay out. 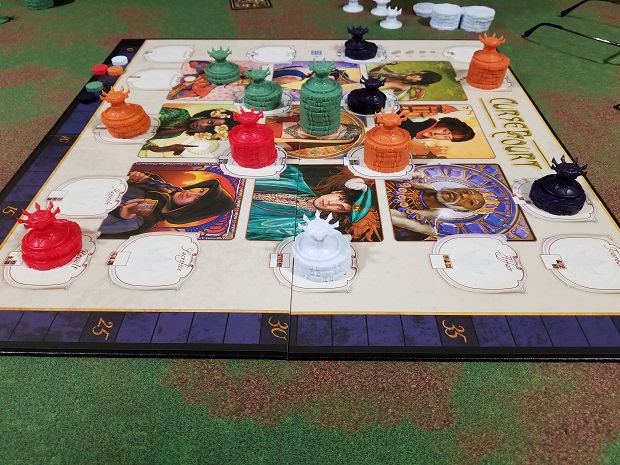 One of the most challenging things for a game designer to accomplish is making a gambling mechanic feel exciting. Gambling with real money offers stakes and consequences that are hard to simulate. Cursed Court achieves this tension by combining elements of several real-world casino games. The board placement of roulette gives players a feeling of control and sometimes makes betting against yourself makes sense. The limited information of blackjack lies in knowing only a few of the hole cards and trying to guess the others.

This also factors into the poker-like bluffing that can occur. The true beauty lies in the cutthroat wagering. Only one player’s bet can live on any given space, but a bet of double the current amount will push the current player off any space. That makes each bet a hard choice. Commit a lot of chips early to lock in a bet? Lay down a low bet on a space you don’t think is going to hit in the hopes another player pushes you off? Hold back chips to see how the other players bet and hope you see a combo nobody else does?

The art direction, short play time and simple mechanics also make it an excellent game to show people who aren’t into board games. One round is all it takes for new players to go from wide-eyed ingenues to shifty-eyed courtiers that trust nobody. Cursed Court offers an evening of high stakes gambling in less than an hour.  And even though there’s only one winner, there’s always the next game.

What is your favorite gambling game? Let us know in the comments!

Review copy provided by the publisher.