In 2017 Grant Rodiek released Solstice: Fall of an Empire, a phantom of a game you’ve likely never heard of. That’s because only 500 copies were printed, assembled, and carefully shipped by mutated Guild Navigators to a select few supporting an independent designer. But now it’s the future of 2019 and Solstice has been reborn anew as Imperius courtesy of Kolossal Games.

Imperius does not possess the Dune license, but it embodies everything we love about the novels in spirit. This is a subtle card drafting game that’s innovative in its own right. The layered approach to strategic considerations gives way to shifting alliances, nuanced betrayals, and dramatic swings of game state. Praise Maud-Dib. 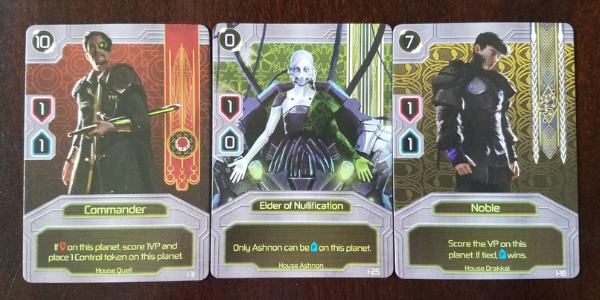 This is a very thoughtful experience, one of surprising cognitive challenge despite a brisk pace and short 45-minute playtime. The central posit is one of chaos and control.

Imperius gets there with its stellar topsy-turvy draft. The cards consist of characters from each of our factions. Thus, my commander, noble, and other adherents are shuffled in with yours and Jim’s and Sherry’s. That deck is then dealt out into hands for each player, units still in disarray and lost amid the absurdity of discord.

So I pick up my starting hand. I have your noble and guard, my commander, and Sherry’s elder and assassin. I choose one card to keep, in this instance going with your noble as I hope to draw into my assassin later and pull off a combo of bloodshed. We pass the remaining four cards to our left and repeat the process.

Lo and behold, my assassin. The sands of Arrakis thirst and your water will satiate them. 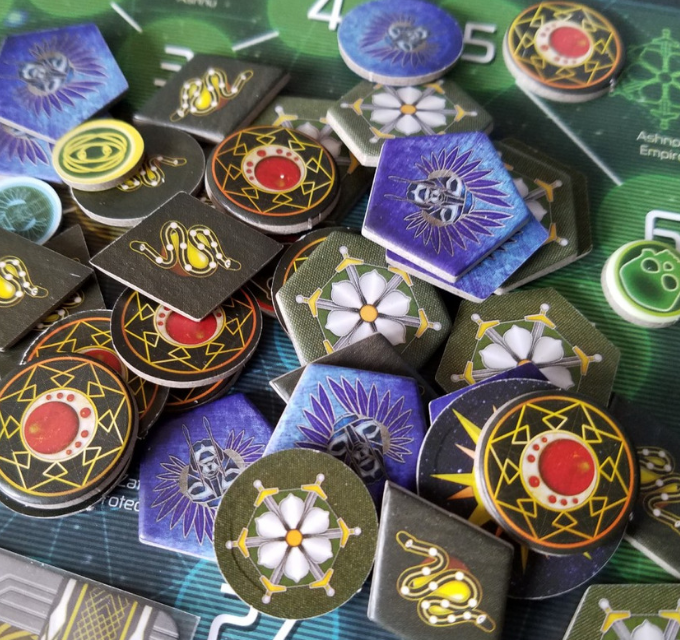 Once we’ve drafted we move on to mobilization. In turn order, we alternate deploying one of our drafted cards to a location on the table. These locales are emblazoned with evocative not-Dune artwork. They influence strategy concerning acquiring victory points and placing control tokens for end game scoring; no matter how much rapid wit and sharp tongue you employ, it always comes back to a worn rifle servicing your will.

This deployment is the second layer of the game. Each area can hold up to five cards and two of each may be played face-down to obscure their identity. This gives way to a deduction element and quite a bit of depth. While it’s easy to slip into this early-going method of playing your first cards face-down, you will quickly ascend the curve of learning and realize the myriad situations where purposely offering information is ideal.

Say Jim’s killing us, having assembled a huge score due to large combos he pulled off in earlier rounds. Maybe you draft his noble if given the opportunity. Maybe you ask the other players if any of them have drafted an assassin. Maybe you set up a one-two punch as you play Jim’s noble to the floating spire of Wujen face-up, beckoning another to deliver the blow. Eat dirt, Jim.

The opportunity for deviousness and clever drafting is astounding. You will develop skill and your own set of priorities as your experience amasses. Each choice of card feels agonizing as you weigh the cloudy value of propelling yourself with hamstringing another.

There’s also a delicious amount of texture due to randomized locations, asymmetrical factions, and a varied subset of event cards. Those events are particularly compelling as they are drafted and played like units. They can upset the balance of play in the best of ways and allow for inflections of color and tragedy. The asymmetrical abilities, on the other hand, deepen the well of exploration as each play will force you to rethink how you exert purpose and rule. All of this is wonderful in combination. 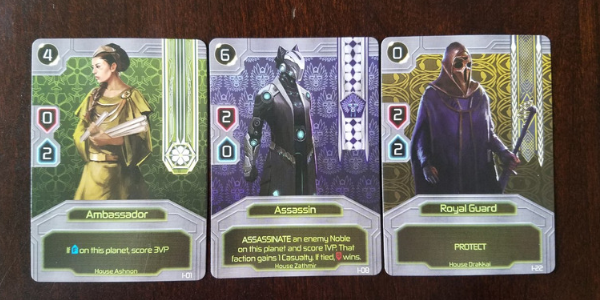 Yes, I am full of adoration for this title. That does not mean its body is beyond reproach. One of the quirks of this system is the natural fallout of that wrestling with control. The experience can openly be assessed as aimless. A selection of cards are randomly not included in the draft each round and what if they’re all yours? You just have to suck it up and look to minimize the damage. You also may luck into a strong combo due to placement, or perhaps have one thwarted. That central notion of presenting a bull and giving you the reins is both fruitful and capricious. Sometimes nothing falls into place and you will focus your blame on the game and its perpetually spinning cogs. Occasionally, you may even be right.

Yet this doesn’t prove an insurmountable barrier. Its brevity and ease of play softens the blow, while those inner complexities will challenge you to return. Opportunity expands as you come back to the table and new revelations will present themselves as if you’ve drank the Water of Life.

It was written: “Deep in the human unconscious is a pervasive need for a logical universe that makes sense. But the real universe is always one step beyond logic.” At once this design feels sharp and nuanced as well as beyond logic. That is the inherent beauty of Imperius.