Upon sight of a fur-coated Jennifer Lopez fourth-positioning a cigarette against the backdrop of a dawn-draped Midtown Manhattan skyline, all in attendance at New York City’s Tuesday night screening of Hustlers were instantaneously won over. I’m not just projecting; the gallery of cheers left little room for ambiguity.

This most memeable—nay, plaster-on-the-face-of-a-blimp-able—of images arrives about ten or so minutes into Hustlers, following introductions of strip club newcomer Dorothy (Constance Wu) and the venue’s queen bee Ramona (Lopez). First beckoned to the screen by the chilling pipes of Fiona Apple, Ramona makes her entrance into Dorothy’s story with the might and mysticism of a soaring dragon, and clings tight to this stature for the bulk of the picture’s run. Ramona takes the greenhorn Dorothy (a.k.a. Destiny) under her wing, gives her a taste of motherly love, and soon enough, makes her second command over the high-stakes dirty work for which the film is named: the drugging and effectively robbing of lecherous Wall Street boneheads. 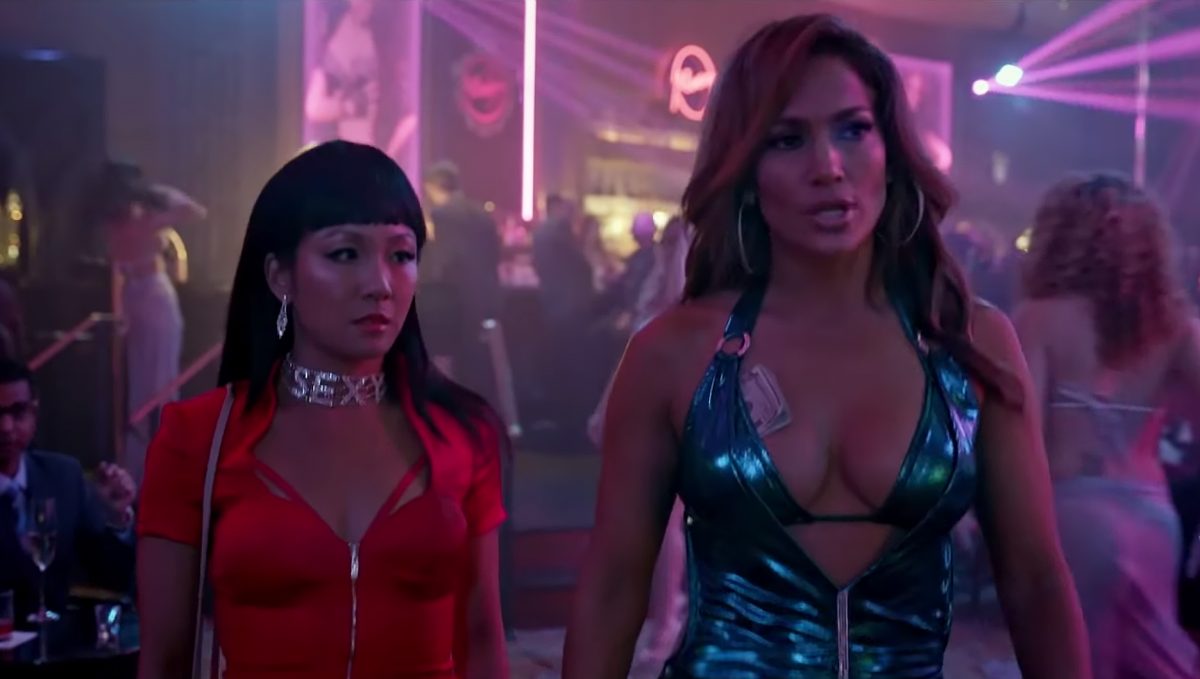 Where a slighter script may have eschewed the resultant maelstrom of philosophical questions in the name of streamlining access to the kinetic peaks of the gambit at play, Hustlers is eagerly engaged with everything we might be feeling about what our heroines are willing to do to make ends meet. From within this necessarily complex ethical quandary, the film mines divided sympathies, sociopolitical fury, bouts of extreme tension, and some miraculous comedy. 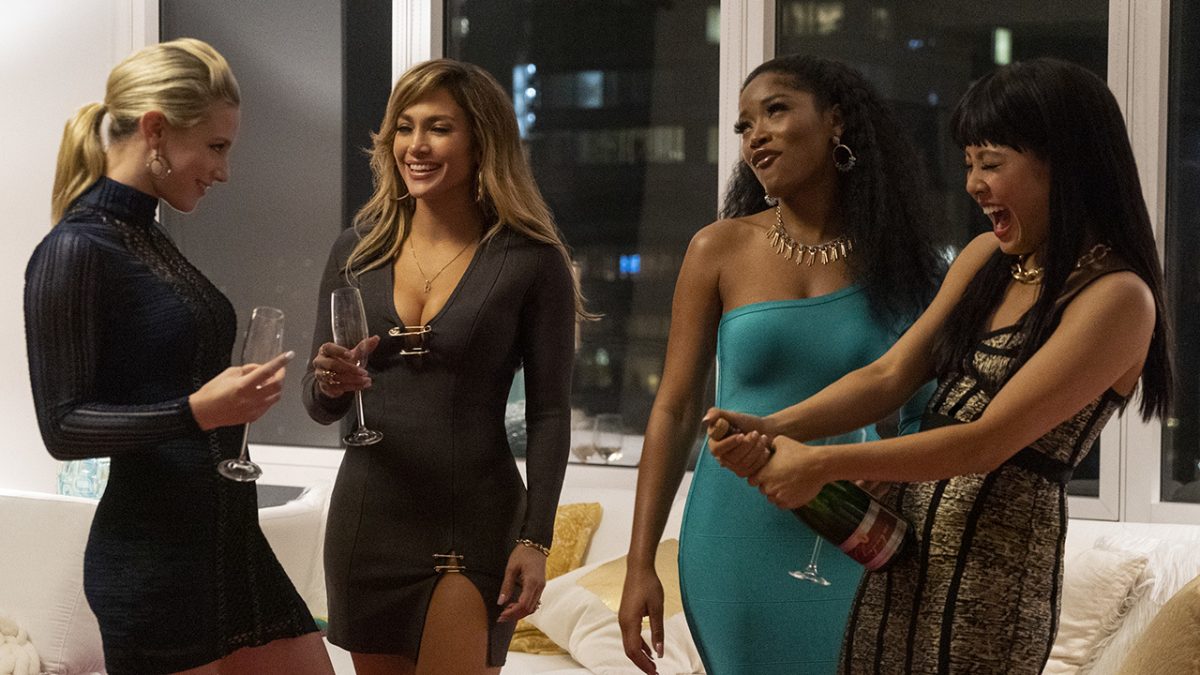 Just as active a participant in the misadventures of Hustlers are meta-textual accouterments, the main player of the lot being its soundtrack. (Along with the aforementioned “Criminal,” we also get instances of Britney Spears’ “Gimme More,” Scott Walker’s “Next,” a Frankie Valli medley, some era-appropriate Sean Kingston, and an Usher ballad accompanying the slo-mo arrival of, aptly, Usher.) The bombast of these song choices, ditto of how they are integrated into the action, not only upholds a playful tone, but reminds the viewer over and again that this is a story about a very specific time and place… rather, very specific, not necessarily altogether reliable, memories of said time and place. The tunes and feisty cinematography run in harmony with Hustlers‘ narratorial device—itself a full step removed from the broadcast of the film, as Dorothy relays the events of the movie circa 2007-2013 to a journalist (Julia Stiles) in 2014.

But all the movie’s thrills and frills take a backseat to Dorothy’s relationship with Ramona, and in fact to the “mythology” of Ramona itself. Blossoming amid the mayhem is a remarkably sweet story about these two women’s fragile devotion to one another, compounded by the difficulty inherent in loving someone who is effectively larger than life. The riotous film becomes stunningly tender when embracing Dorothy’s feelings for Ramona, Ramona’s for Dorothy, Ramona’s for herself, and each woman’s for a world that has allotted little room for them. 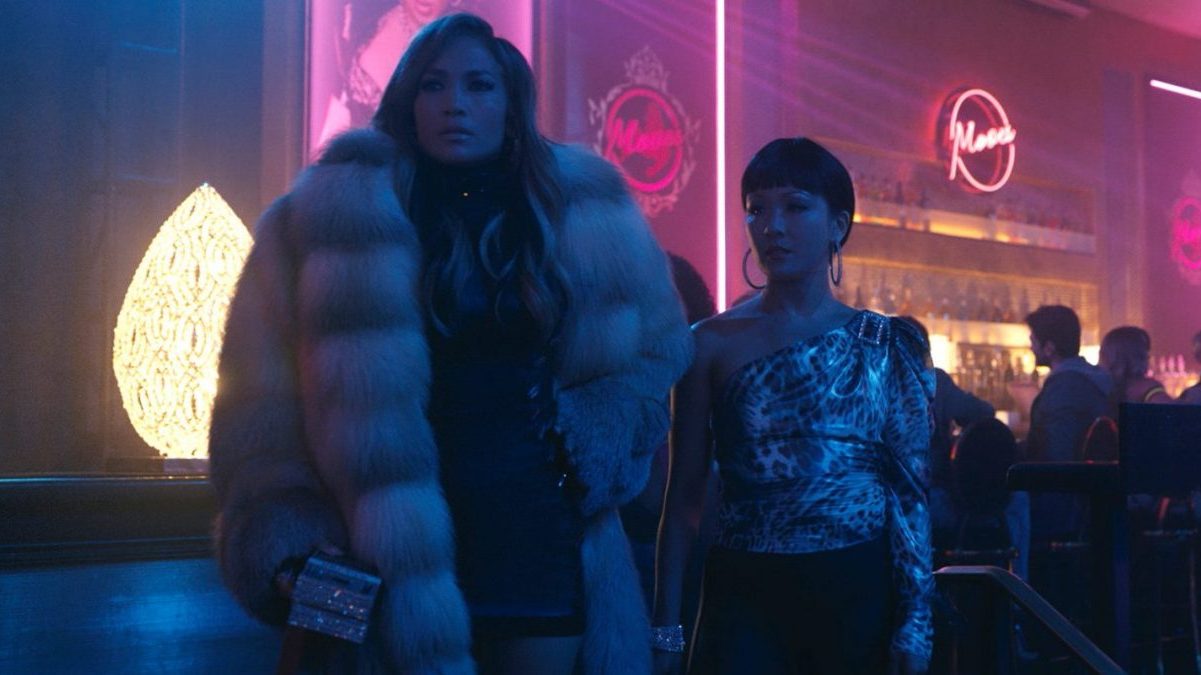 That introductory glimpse of JLo in a majestic fur, reigning over Manhattan with a smoking scepter in hand, was hardly the only instance to evoke audible enthusiasm among my compatriots in audience of Hustlers. The plentiful needle drops, snappy gags, and shots of club-fatigued chihuahuas alike wrought a monsoon of unbridled joy over the lot, yours truly included. But among all the fun, it’s the surprising sweetness of Hustlers that stands out to me: its ability to reckon with the “bad” done by Dorothy, Ramona, and the rest—both unto others and each other—and still come out the other end suggesting they were worthy of our time, and our love.