See What the Hubble Telescope Photographed on Your Birthday - Nerdist

See What the Hubble Telescope Photographed on Your Birthday

For nearly three decades, the Hubble Space Telescope has been giving us Earthlings stunning images from our universe, images that would have been impossible to see just a few years prior. The Hubble was launched back in 1990, and to celebrate its thirtieth anniversay, we’ve learned (via Gizmodo) that NASA has unveiled a new search feature that is cosmically cool. It allows folks to see just which celestial body the Hubble was able to capture on their birthday. Then it gives them the option to share what they find on social media. And using the hashtag #Hubble30 to honor the anniversary of course. 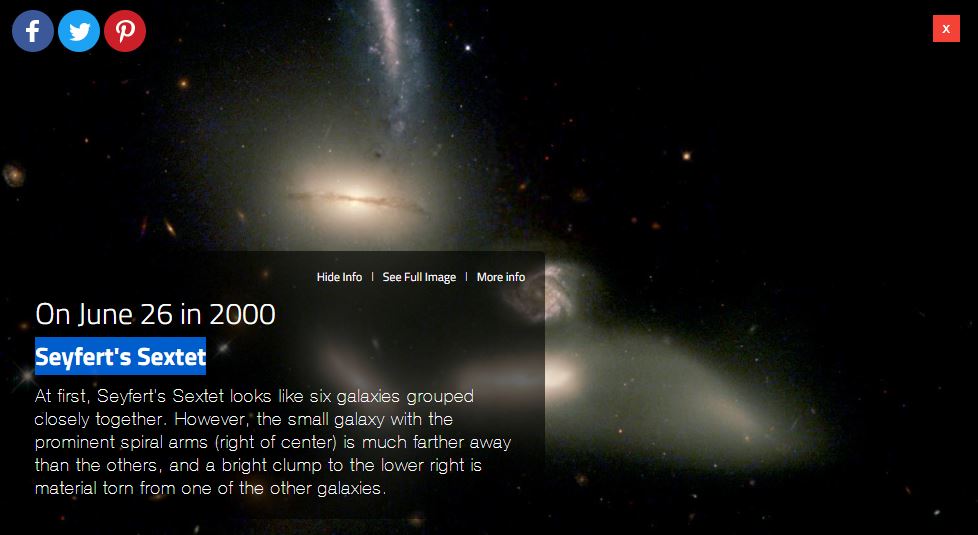 All one has to do to is to enter the month and day you were born by clicking here, and then the image pops up of whatever it was the Hubble photographed in space that day. I did it myself, and it turns out that on my birthday in the year 2000, Hubble captured a cluster of six galaxies. It’s Seyfert’s Sextet. And I have to admit, a whole cluster of galaxies is a pretty dope b-day present. Now, we should note that this is only good for month and day. So if you want to know what Hubble photographed on your birthday on a specific year or even on your birth year, they can’t help you.

The Hubble has captured some significant images over the years; it took the first photos of the furthest known galaxy from the Milky Way. Not to mention the very first sighting of water vapor in a “habitable zone” that lies far beyond our own solar system. And if you think for some reason your birthday doesn’t have a pic, I wouldn’t worry. This legendary telescope has snapped pics every moment for thirty years. No matter what day you were born, there’s definitely a photo of something galactically grand to go with it.