How Developers Put the Magic In Puzzle Quest - Nerdist

How Developers Put the Magic In Puzzle Quest

Hey guys, JC from Hibernum here. I’m in charge of card design, integration and balance, and we figured we’d give you a bit of insight as to how we design a card set like Aether Revolt, as well as some new ways to play the cards we’re adding into the new Magic: Puzzle Quest set.

First and foremost, since Aether Revolt is the second part of the Kaladesh block, we made the decision to include a lower amount of cards than if we made a full set (like Kaladesh). This way, we don’t flood the game with a huge amount of cards in a short amount of time and it lets us fine-tune the more glaring flaws of the previous set.

For a set like Aether Revolt, we end up choosing to design and integrate around 60 cards. The process of choosing which cards to integrate is not always the simplest one, but here’s how we typically do it. 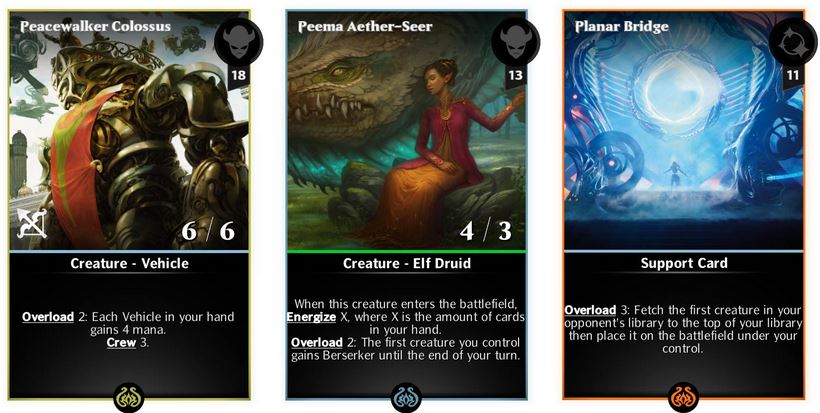 Initially, we have a read through of all the cards in the set, to get a good feel of what the set is about, what new mechanics (if any) the set introduces, and where we could go with it. Aether Revolt, being part of the Kaladesh block, still includes mechanics such as Energy and Vehicles, and so this works particularly well with what we already have in-game.

Typically, any card that makes sense that uses any of the mechanics we had in the previous set will get picked first, since we can leverage their use across the board and introduce new synergies. Kaladesh’s abilities and the way we translated them are very synergistic – Energize and Overload, which are our two main keywords for the set, are well-represented in Kaladesh, and adding new cards which make use of these keywords is even better.

We also look at what holes are in the set and try to find cards that would work best at closing them up. For example, in Kaladesh, one of the problems we had was that while the Energize/Overload mechanics work very well, players feel like they need to invest a lot into Energize to be able to take advantage of the Overload abilities. With this in mind, players need cards that provide a lot of energy (or potential energy) so that they do not feel like they must load their decks with a ton of Energize cards. To this effect, each color has new cards that will help Energize with a much lower investment.

We have also seen from internal testing as well as from some players that players are able to energize a huge portion of the board, which is very interesting as it makes us able to make very strong Overload 3 abilities that have a huge impact on the game. Three cards in particular come to mind: Gonti’s Aether Heart, Planar Bridge, and Mechanized Production. 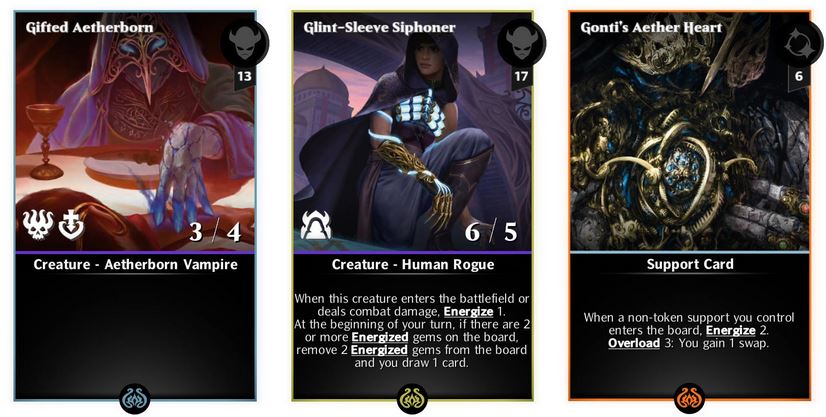 Our version of Gonti’s Aether Heart grants players an extra swap whenever they Overload 3, which is incredibly powerful, especially when combined with some of the other cards that grant extra mana when you overload, like Aether Hub and Servant of the Conduit. Extra swaps are always very strong, and this by itself is a strong ability. Gonti’s Aether Heart also Energizes whenever a non-token Support you control enters the battlefield, which also ensures you should have plenty of Energy to fuel your abilities.

Planar Bridge is a new card we use that has a new unique ability: when you Overload 3, you’ll steal the first creature in your opponent’s deck and place it on the battlefield under your control. When facing some of the stronger decks, you can end up stealing your opponent’s combo pieces, some of their strongest creatures, and also create unique variations that are currently impossible otherwise in the game. One other side effect it also has is that it delays your opponent drawing a creature, since you take the first creature in their deck – if their deck has a low creature count, it’ll delay them that much further.

Last but not least, Mechanized Production is another very strong Support that has a game-changing ability: on Overload 3, you’ll reinforce all the creatures you control on the battlefield. This works particularly well with end-game decks that use very strong creatures, and when you manage to Overload 3 multiple turns in a row, the power gain you get is very, very high.

Jean-Charles Frenette is a Senior Game Designer at Hibernum and is in charge of Planeswalker and card design. He is an industry veteran with more than 15 years of experience in the game design field and has been at Hibernum for the past 5 years, including 2 years on Magic: The Gathering – Puzzle Quest. You can find a complete list of cards here.