If you met a werewolf or vampire, would you run away or try and kill it? What if you entered a haunted house hosting a party that never ends? Flee or get a priest to exorcise all the ghosts? All of those reactions seem reasonable. As does freaking out, like most people would. But most people aren’t New Zealand’s finest paranormal investigators, Officers Minogue and O’Leary. They don’t shy away from the most terrifying cases. Alien plants and Hell demons can’t make them abandon their post. Not because they’re cool under pressure though. They’re not smart enough to appreciate the danger they’re in. Because Wellington Paranormal‘s lovable cops are members of one of television’s best traditions: polite idiots. And they’re the reason the show is one of television’s funniest. 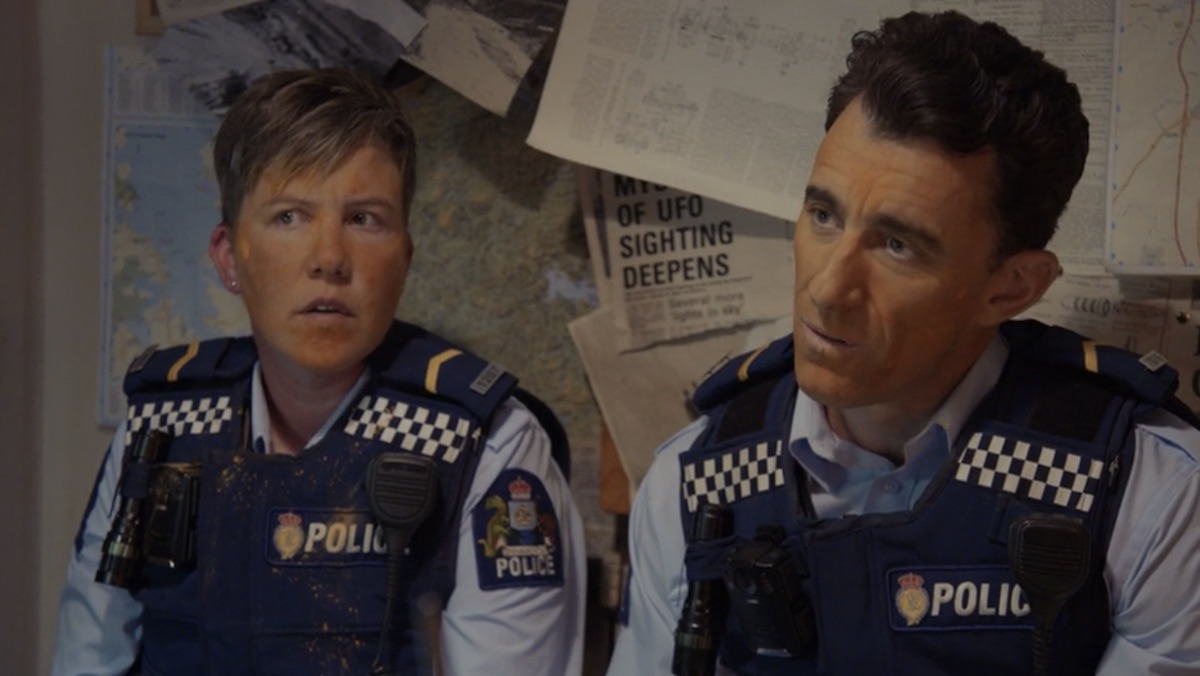 Jemaine Clement and Taika Waititi’s first What We Do in the Shadows TV spinoff works because its two delightful dolts and their equally ridiculous sergeant are dumb enough to be hilarious, while still being likable enough that we root for them and want to spend time with them. That delicate balance is possible because Minogue, O’Leary, and Maaka are smart enough to do their jobs like professionals, but not smart enough to realize how absurd their jobs are. They treat the most surreal circumstances like regular calls. Whether that’s chasing a “normal” plastic bag through a parking lot or finding robed figures chanting around a naked man tied to a stake.

Their commitment to doing their tasks honestly and as well as they can—while always maintaining proper decorum with both the public and their colleagues—turns their sincere reactions into deadpan comedy gold. It makes them worthy members of one of TV’s great tropes.

Television’s past is littered with well-meaning morons, including on some of the best sitcoms ever. That group includes luminaries like Christopher Lloyd’s Jim on Taxi, who starred opposite co-star Andy Kaufman’s Latka. Cheers replaced Coach with the equally likable, equally dumb Woody. They both served beers to John Ratzenberger’s Cliff Clavin. The Golden Girls wouldn’t be the iconic show it is without the wonderful child-like simplicity of Betty White’s Rose. And White was also on The Mary Tyler Moore show, which featured Ted Knight as the beloved buffoon Ted Baxter. 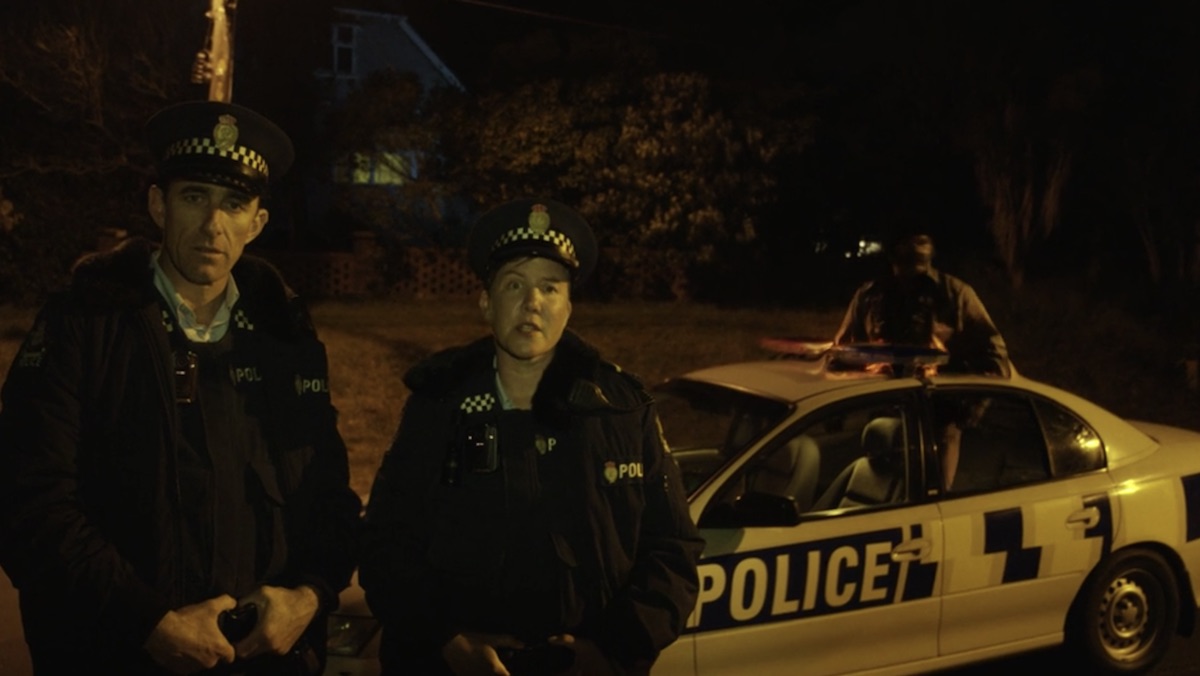 “Please, look, everyone, please just leave now and make your way to the afterlife, OK?”

From Joey Tribbiani on Friends to Kramer on Seinfeld, Norton on The Honeymooners and Frank Burns on M*A*S*H, Kenneth on 30 Rock and the bosses on both versions of The Office, to Chrissy on Three’s Company and Todd on Bojack Horseman, having an intellectually overmatched character can almost seem like a prerequisite for a great weekly comedy. Even if they aren’t all dumb in the same way—nor lovable for the same reasons—their inability to grasp the full magnitude of their situations consistently elevates the humor of any premise.

“We’re here at Kurimarama St., attending a domestic dispute between a former couple, who are now werewolves. This is a new kind of case for us, so procedure is a little bit uncertain. But we’ll definitely look at getting these two microchipped.”
“Or, um, if they continue to cause trouble, neutered.”

Wellington Paranormal uses that conceit not for one character but as the basis for the show’s humor. The series’ polite idiots are at the center of everything that happens. Without the kindly aspect of their characters though, spending all that time with them would grow tiresome. No one wants to hang out with an obnoxious oaf. Or an annoying moron. If we didn’t like them, we’d eventually decide we didn’t want to be around them. Their polite demeanors and positive spirit are vital to both the show’s comedy and making us care about the people that comedy both revolves around and primarily comes from. 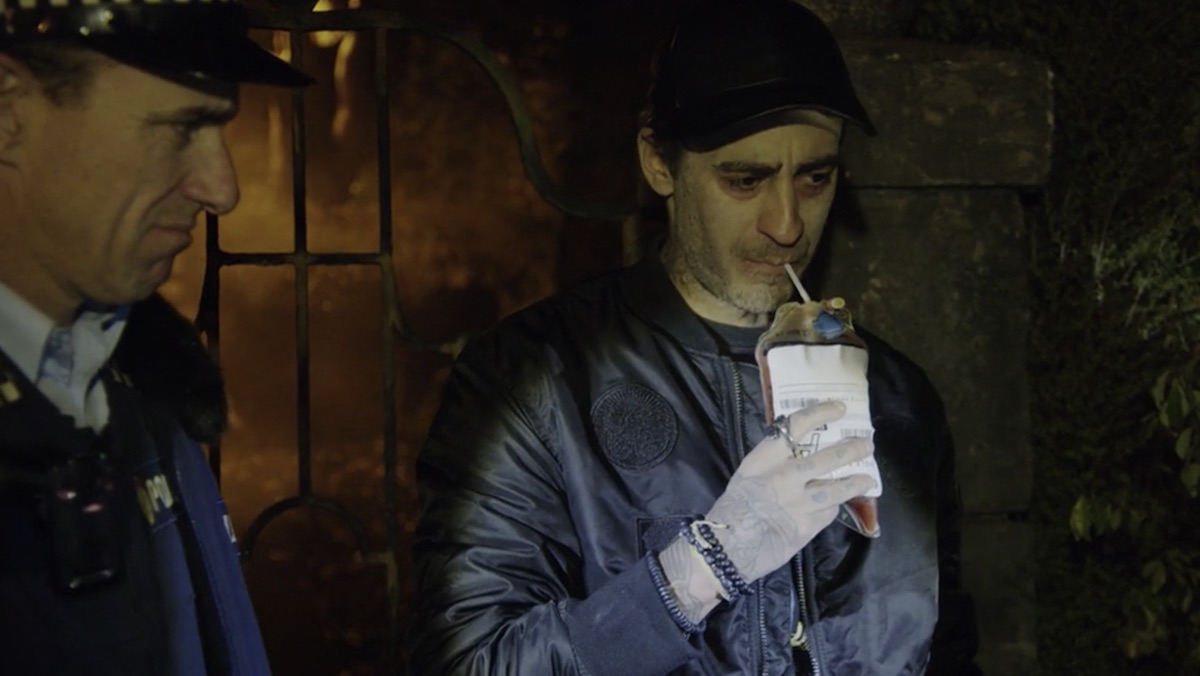 “Glamouring is a hypnotic form of sorcery, or spell. It’s a power that’s innate in vampires. They can use it to charm people or even erase your memory.”
“Nah, I’d remember something like that.”

That’s also because even slight deviations from their genial nature can result in perfect comedic moments. Even when they’re not feeling especially kind, or they’re under tremendous stress, Minogue and O’Leary remain polite with each other, their boss, and the public. It’s why a desire to hold “the taser” during an intense she-wolf hunt, even though it’s not your week with it, is presented as a courteous offer to relieve your partner of holding something heavy. The result is a brilliant moment of character driven hilarity, the key to any sitcom. As a totally surreal scene involving a mythical monster gets a dose of petty-but-polite selfishness. It’s sharp and broad humor all at once.

Sitcoms have long been the perfect playground for lovable dummies. They always will be. Wellington Paranormal’s genius is that it took that playground and turned it into an entire field. A field full of plants that grow into pod people. But more importantly a field where one of TV’s best tropes can grow into one of TV’s funniest shows.