There are few things more delightful than seeing a group of creators excited about what they’ve made, and it’s all the better when itâ€™s a product worth getting excited about. That was the case at the New York Comic Con panel showcasingÂ  How to Train Your Dragon: The Hidden World, the third and final film in the HTTYD series. (At least, weÂ thinkÂ itâ€™ll be the final film. There was no tease of further installments, but there are always the TV and comic spinoffs.) Director Dean DeBlois, producer Brad Lewis, Jay Baruchel (Hiccup), and surprise guest F. Murray Abraham, who plays the antagonist, participated in a lively discussion of what we can expect to see in Berk and beyond whenÂ The Hidden WorldÂ premieres next year. Plus, we got a new trailer tease, and itâ€™s suitably epic.

What caused the most fanfare at the panel was the introduction of a character DeBlois described as a love interest for Toothless, a pure white beauty named Light Fury. (At least, that’s what Astrid dubs her in the trailer, and how the panel referred to her). â€œShe has a rather unique ability,â€ said DeBlois. â€œShe can blast a fireball ahead of herself and fly through it, and in doing so, she heats up her skin and her scales and they turn mirror-like.â€ Thatâ€™s right: Light Fury has whatâ€™s basically a built-in invisibility cloak. And if youâ€™re wondering how cool that is, having seen the clip, I can assure you itâ€™s very cool indeed. Light Fury and Toothless develop a connection that leads to Toothlessâ€™ journey with her to the titular hidden world. But itâ€™s not the smoothest courtship in the world. “[Toothless] finds himself relying on Hiccup to advise him, which is a terrible idea,” said DeBlois. So if you were concerned that the more action-packed turn this entry in the series takes (and more on that in a minute), rest assured that there’s at least one hilarious scene inÂ The Hidden World.Naturally, because villainy is an essential part of a heroâ€™s quest (and Hiccupâ€™s is to bring all the worldâ€™s dragons back to Berk — which, sure, aim high, dude), we also have a new character whoâ€™s a bit on the evil side: Grimmel, who aims to take Toothless from Hiccup. Given the clip of their first confrontation, in which Abraham chews the scenery as no one else can (quite a task when you’re going on voice alone), I fully believed Abraham when he said, â€œI had a wonderful time with these people.â€ 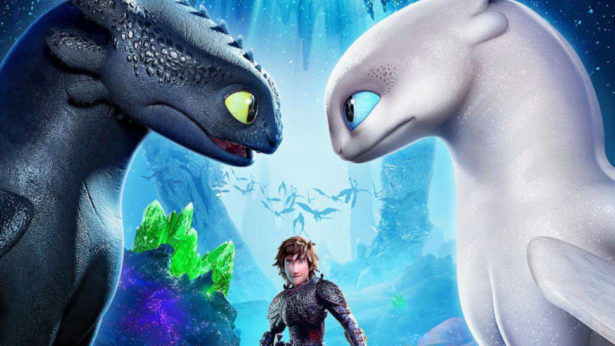 The clip featured what was one of several explosive battle sequences we got a glimpse of, which leads to one of the panelâ€™s key takeaways: the HTTYD series, while still story-driven and full of humor, is much more action-heavy in this third installment. To DeBlois, that’s the natural conclusion of the unique opportunity he’s been given â€œTo tell a trilogy, three acts of one story,â€œ as he put it, each able to stand alone as well as serve as part of that whole. His hope, and the hope of the entire crew behind the series, was to put out something that stood alongside cinemaâ€™s great trilogies, movies that never let you down, no matter which installment of the series you chose to watch. From the look of it,Â The Hidden WorldÂ will live up to such lofty expectations. Itâ€™s a shame weâ€™ll have to wait until Feb. 22nd, but learning more and getting that stunning new trailer make it worth the while.