How to Run a Thanksgiving Themed D&D Session. - Nerdist

If you’ve got a regular D&D game going, you may enjoy theming your gaming sessions around the holidays that are going on that time of year. Halloween and Christmas-themed games are probably most common, given how Halloween creatures and Krampuses make for great enemies to slay, but why not a Thanksgiving game? Of course this is an American/Canadian holiday that isn’t celebrated around the globe, but at its core Thanksgiving is a harvest celebration and that’s common in every culture. So just pulling from themes like “harvest holiday” and “giving thanks,” we can whip together three concepts that might work for your games: 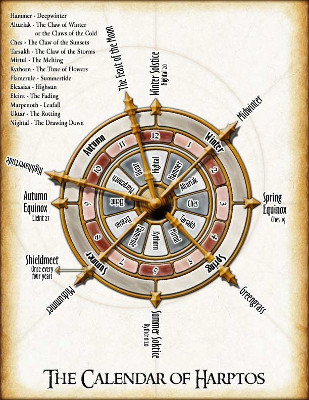 Highharvestide is the Faerunian harvest celebration and a fine holiday to have occur in-game while you’re mashing monsters and eating leftover mashed potatoes or rolling for initiative while munching on a dinner rolls at the table.

The festival has many of the trappings we associate with Thanksgiving including feasts, with the cooking often starting as much as a tenday beforehand. There are also food related contests like pie eating, feats of strength, and skill challenges for folks to participate in. While a parade through the center of town is not part of the lore as-written, you could include that anyway. Maybe include some large gnomish balloons made in the shapes of animals, dragons, and popular legendary monsters much like the massive balloons of cartoon characters during the Macy’s Thanksgiving Day parade.

This is also a time when rulers would hold “open court” to hear the concerns of their subjects, which might be an opportunity for your party interact with some high ranking peoples. Or your party could be present when someone presents the king with stories of a monster attack nearby or some other plot hook.

One particular legend might also kickstart your session. It is said that the “Stag King” (a powerful fey creature) sometimes appears over the bonfires to those who are destined for adventure in the coming year. You could adapt this to mean the Stag King’s appearance means the party has to adventure RIGHT NOW. Perhaps win a favor from the Fey King as recompense. It’s hard to turn down a challenge from a giant man with stag skull for a head.

If you prefer headier gameplay, perhaps you can use the concept of “being thankful” and gratitude as a motivating factor. On a seemingly unrelated mission to defeat a monster outbreak, have an Archdemon (or a Fey creature) offer the party a bargain: if your party reveals what they are thankful for, he will return the favor and empower them.

This could be as simple as giving a token to a single player. They can spend it like inspiration, but then they have to reveal one actual gameplay moment where they were thankful for another player’s actions. Then they hand the token to that player. This is a great way to revisit some of the party’s favorite battles and other moments from past adventures. You can limit the overuse of the token by saying each new thankful moment has to be bigger than the next. For example, if I’m thankful that the party’s Life Cleric healed me in one instance, I have to find a bigger moment for the next one like an ally successfully defending me and blocking a deathblow.

I take a lot of inspiration for this idea from Phoenix: Dawn Command and its creator, Keith Baker, who brainstormed with me directly. That game often asks players to spin character building and team building into their actual play. It’s a good mechanic if you like to promote a little teamwork before the party goes up against real challenges.

If you want to up the ante further, you could have the Demon of Fey who made the bargain return at the end of the session to attack them. To twist the knife, you could disable some of the things they revealed that they were thankful for. When the party defeats the Archdemon, everyone gets their abilities and synergies back. This will make them even more grateful and thankful for those abilities since they had to work without them.

To borrow a little more directly from the American Thanksgiving stories, you can set your adventure in a newly settled outpost in snowy northern lands. The party just happens to arrive around the time of their first harvest, making this a make-or-break moment for the future of this settlement. Of course, this is when the orcs attack…

Having the party work to defend a settlement may not feel like anything new, but knowing that success will make them legends in the history of these people can add a little more impact. Defending the harvest also adds a new element to the proceedings. The orcs may target the incoming harvest as a distraction or just to sew chaos, knowing that even if the town survives the assault, it is doomed if their food supply is burned. Doing this ramps up the tension and splits the party’s focus to protect both the people and the crops.

Of course when it’s all over and the party has save the town, it’s time to feast. The celebratory feasts can contain turkey, pumpkin pie, or whatever else you think that would sell the players on this feast being an expression of thanks.

If you wish, there are lots of other ways to swing a Thanksgiving game into your campaign from fighting giant demonic turkey monsters to defending against mashed potato oozes and every food-based monster in between. It’s also a great opportunity to give thanks to each other and celebrate the community of your players. That or your group can just manage whatever little gameplay you can muster as you power through your food coma. Dropping the dice from the couch to the floor counts as rolling, right?

Tell us about your holiday themed games in the comments. Or just eat as much as you can and get back to it later. We understand.