Every Friday at 4:00 PM PT, a talented crew roleplays their way through the galaxy to fulfill a mission: to boldly go where no one has gone before. Follow the adventures of the USS Sally Ride on  Shield of Tomorrow on  Twitch and  Alpha.

We live in the Age of the Geek Ascendant. Every popular media franchise comes with dozens of books, comics and other extra materials that fill out the worlds we love in the gaps beyond the source material and our imaginations. The Internet puts all that information at fan’s fingertips, ready to settle (or start) arguments about the things we love. The split between what exists as official information versus what is mere fan speculation fuels many of these arguments.

There are a lot of grey areas as well; are deleted scenes canon? Tweets from the creators? If a tie-in novel conflicts with another media, which one is true? Canon is a term originally used in discussions of religious writings to define what tales were officially accepted and which were just legends that weren’t true. Given the intensity of some ongoing fandom debates, religious fervor might not be that far off the mark in describing them. There is a line that generally separates fan fiction from canon, but on rare occasions, something crossed that line.  Star Trek Star Fleet Technical Manual, written by Joseph Franz and published in 1975, is the rare work that is both fan fiction and canon.

Star Trek was no stranger to tie in media during its original run. Novelizations of Original Series proved popular during the run of the show and publisher Ballantine Books started releasing new stories featuring the crew of the Enterprise in the seventies. In 1973, an aerospace engineer named Joseph Franz started making technical drawings of the various props of a fan club had acquired or made on their own. He started to puzzle out what the various knobs and buttons on classic items like tricorders and phasers might do. He sent these drawings to Gene Roddenberry who was impressed by their detail but thought the franchise was dead at the time. His wife, Majel Barrett Roddenberry, was producing Star Trek memorabilia at the time as part of Lincoln Enterprises. Roddenberry passed on the drawings to her, and she gave Franz unprecedented access to prop notes and carpenter’s drawings of the sets. A book of these drawings was eventually published under the Star Trek Star Fleet Technical Manual in 1975 and sales caught the Roddenberrys off-guard. The book has since been regularly reprinted every decade or so to coincide with a big Star Trek release. 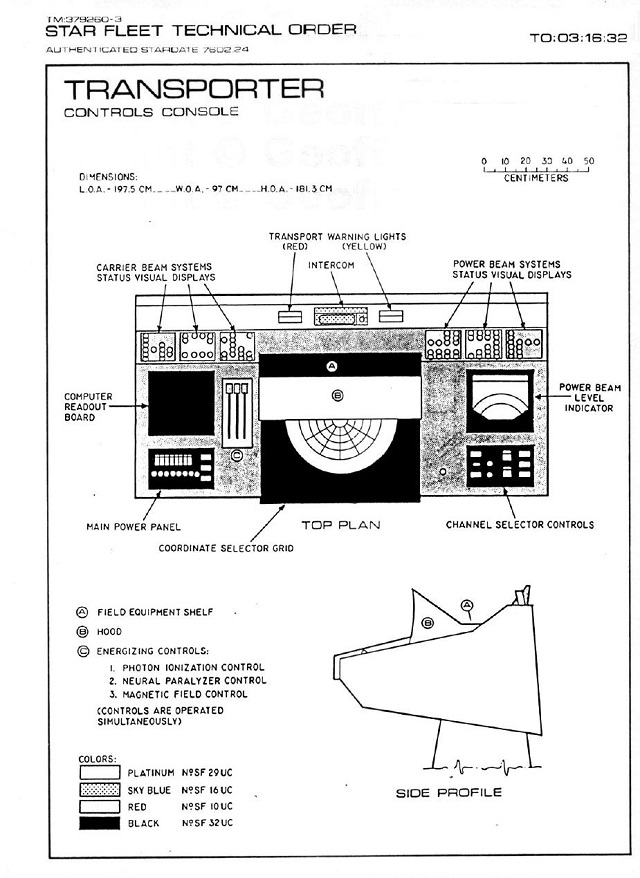 The book also took an unusual format. It claimed to be an accidental transmission of Star Fleet (note the different spelling) information intercepted by the Omaha Air Force Station during the episode “Tomorrow is Yesterday”. In-universe tie-ins are commonplace these days, but the premise was very revolutionary at the time. The success of the book allowed it to influence some of the early Star Trek films, which means material from it became official. Many of the ship names that first appeared in this book have since been used in later official works, and starship schematics from the book appeared in the background of The Wrath of Khan and The Search For Spock.

Roddenberry made a move to reassert control over official Star Trek lore once The Next Generation proved successful, being one of the many reasons the original Star Trek RPG was cancelled. This book was reprinted as recently in 2006 and is still an important touchstone in many fans’ Star Trek experience. Without its success, similar books such as Mr. Scott’s Guide to the Enterprise, Star Trek: The Next Generation Technical Manual,  or Star Trek Deep Space Nine Technical Manual would have never seen print, nor would the idea of in-world books spread to so many other franchises. Any of these books are a great source of info to a Star Trek Adventures GM. And who knows? Perhaps something born at a gaming table today will appear in real Star Trek book tomorrow…

What piece of Trek fan art is your favorite? Tell us in the comments! And be sure to tune into our Star Trek RPG show,  Shield of Tomorrow on Geek & Sundry  Twitch and  Alpha every Friday starting at 4 PM PT, followed by our aftershow on Alpha, Behind The Shield, where the crew discusses the episode and other Star Trek topics.