YOU ARE BEING CONTROLLED…or, at least, that’s what Oink Games, the company behind Insider would have you believe. I’m going to address the elephant in the room right away and say that this game’s theme has almost nothing to do with its gameplay. Insider wants you to think that it’s about free will and questioning whether or not we really control our actions, and I get why it does this, but there’s very little foundation here to support such a grand idea. But that’s ok, really, because what Insider is instead is an interesting take on the classic game Twenty Questions.

I’m sure you’ve all played Twenty Questions as a kid, where someone thinks of a thing and you have to ask yes-or-no questions to figure out what that thing is. It’s a perennial favorite of tired parents everywhere who just need to keep their kids entertained for thirty freaking minutes while they drive to their cousin’s for the family reunion that no one in the car wants to go to in the first place. You know it. 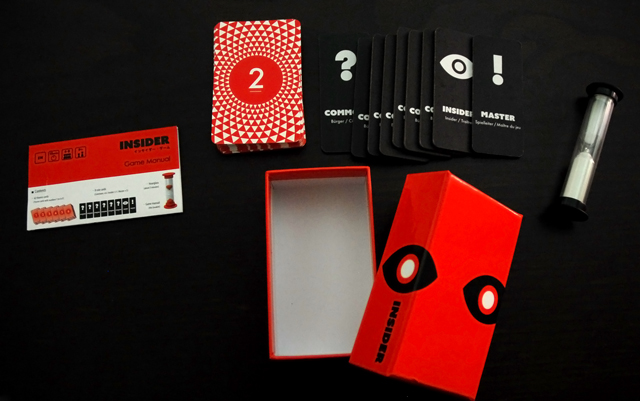 This of course gives the Insider the opportunity to subtly direct the questions towards the right answer. And you want to be subtle because at the end of the round everyone involved is going to try to figure out who the Insider is. You’ll flip a sand timer and have five minutes to ask questions (or, about five minutes, as the manual makes a point to tell you). When someone figures out what the thing is, you flip the timer over again and have that long to discuss whether or not the person who guessed right is the Insider, and if not, who is.  You put it to a vote and if the Insider was clever enough to stay under the radar, they win. Otherwise the rest of players share the victory.

There’s also an advanced version of the game that adds three small but very important rules. First, it adds an extra Common role card to the group, which means that one role card will be left out, allowing for the possibility that there won’t be any Insider that round. The second addition lets the player who guessed right look at any one player’s role card, or at the card that was left out and can then tell the others whatever they want about it. Lastly, if the time runs out and no one has guessed correctly, instead of everyone losing right away, the Master has one chance to guess who the Insider is. If they do, the Master and Commons win. In my opinion, this is how the game should be played, with the base version serving only to teach new players the rules. 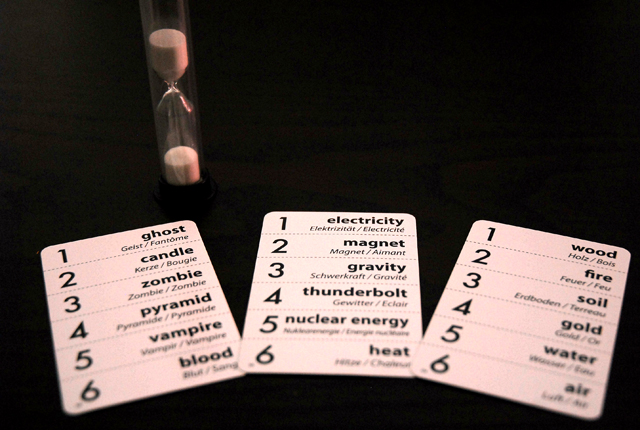 One thing I noticed while playing, and I’m having a hard time classifying this as a good thing or a bad thing, is that the game almost seems to invite house rules. The game itself is pretty bare-bones, and you’ll quickly start thinking of ways to improve it for your group. My group decided that instead of letting everyone ask questions at once, which often led to one or two of us dominating the conversation, we made it turn-based. When everyone has to ask exactly one question at a time, that makes the Insider’s job much more important.

We also noticed that, if you’re both the Insider and the kind of person who just wants to watch the world burn, there’s not a lot of incentive for you to be very helpful. You especially won’t feel the need to guess correctly. We figured a point system might improve this, with the Insider losing points if no one can find the answer. It would have been nice if the game included things like this, but we had fun coming up with these variants, so I really can’t fault the designers for what they gave us.

All in all, I think Insider is a great introduction to hidden roles games. It’s easy to teach, doesn’t take long to play, and the box is so small it’ll fit right in your pocket. Now, there is a wealth of games out there that explore the concept of hidden roles in greater depth: Werewolf is a classic, Two Rooms and a Boom is great for large groups, and Secret Hitler is wonderful if you like the idea of lying directly to your friends’ faces while accusing them of literally being Hitler (and honestly, who doesn’t?). However, these can be a little intimidating for new players, especially if they don’t have a lot of gaming experience. If you’re trying to get your non-gaming relatives or maybe a group of younger players into this type of thing, you could do a lot worse than starting them off with Insider.

Do you have a favorite hidden roles game? Let us know in the comments below.