Trick-taking games are as old as dirt. Attempts at innovation in this genre are as old as, well, plastic or poly synthetics or something you know, old but not quite that old. Recent endeavors such as Diamonds and Joraku seek evolution by taking the output of a particular hand as input for an external process. Stuff like triggering special effects, gaining capital, and influencing a board state. Heroes and Tricks says “nuh-uh”, and does things its own way.

This is the most recent release from designers Eduardo Baraf (Lift Off!, Herbaceous) and Jonathan Gilmour (Dead of Winter, Vault Wars). It takes that idea of placing creative spin on the trick-taker by modifying the process in which you play cards. This is radically different as it provides a strong sense of identity and does a great job at separating the design from the pack. How do we get there? By combining hearts with the age-old playground activity telephone.

It sounds novel because it is. Setting up a trick where only the lead player possesses information pertaining to what suit and color needs to be played is a huge twist. The injection of mystery helps build up a sense of drama that’s atypical for this genre.

Players downstream have to use a dose of deduction along with a large helping of gut instinct in order to determine what to play. Near the end of the line the last participant is likely frowning and wrinkling their brow. There’s a good chance they’re expressing their sailor vocabulary at those earlier in turn order. The decision point here comes down to one of hand management–do you simply toss in a high card hoping to get lucky and win the trick? Maybe you bail on it altogether and just ditch a low card to keep your future options open.

The deduction element also has an effective curve of its own. Early in the game players will possess more cards in their hand and be able to better match the color/suit of the hero. Late game you have to make due with what you have and the experience becomes a little more loose and chaotic. At this point upsets are more likely to occur and the outcome of a particular hand is more up in the air. 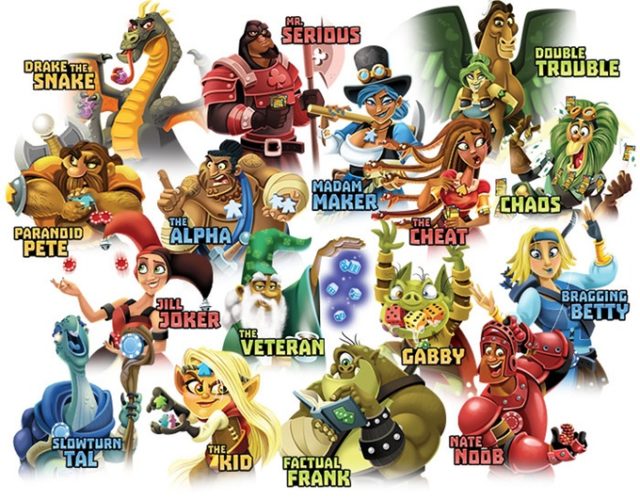 This process and the intertwined emotions are the real fulcrum of this design. Much of your enjoyment will hinge on whether you can find a certain level of entertainment in those silly and sometimes random moments. In a six player game at times it can feel as though you have no shot at winning the hand and are merely tossing some dice at a craps table where the odds have been shifted in the dealer’s favor.

Those in the middle of the pack will be able to exercise a degree of strategy. You still will feel like you don’t have a great deal of control, but information is more meaningful at this stage. You can also take some delight in being an evil SOB and trying to throw those downstream off the scent by playing a card completely off the trail. There’s a certain amount of joy that arises from watching your friends squirm and flail about at your behest.

Much of this game is dealing and wrestling with that control. The best tool to get out in front of the maelstrom is also one of the most interesting elements of Heroes and Tricks. Gear cards are special one shot abilities you can play to tighten your fleeting grip on that swirling chaos at the heart of the design. 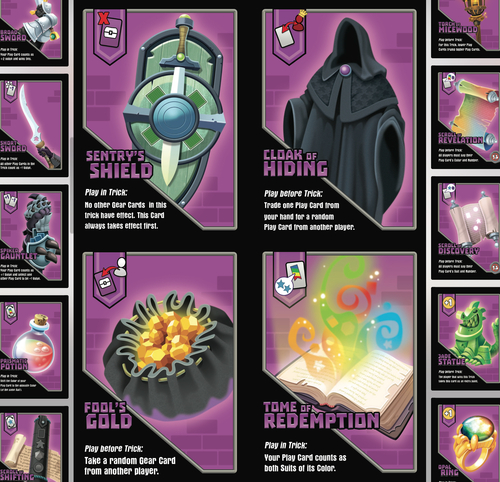 These gear cards are the strongest element of Heroes and Tricks because they inject a sense of drama and legitimate power. They bolster the fantasy aspect of the game and open up the play-space. They also make you feel extremely clever when you’re able to shift the color of your card to align with this round’s hero and sneak out a victory, all the while throwing others off the scent.

A primary quality of Heroes and Tricks is its beautiful sense of candor. This is an affordable 15 minute game that hides nothing. A hand or two in and the impression is already made. There’s definitely some Harvey Dent action going on here. Some will hate it and feel the overwhelming randomness is a waste of time. Others will dig into the silliness and tease out some of those strategic crumbs. To enjoy this game you really need to commit to the social aspect and bluffing, while not taking the experience too seriously.

Are you a fan of trick-taking card games? Have you played Heroes and Tricks? Let us know in the comments!