HELLRAISER I and II Are Hellishly Perfect - Nerdist

HELLRAISER I and II Are Hellishly Perfect

It’s a franchise that’s over 30 years old and has given horror audiences 10 movies. It’s one of the most important series in the whole genre, giving us one of the most indelible villains of all time. But for all that importance, most of the Hellraiser series is *checks notes* very bad. Really, once you get past part four, there’s no reason to watch beyond perverse curiosity. Fitting, I suppose. Hell, part three has a cenobite with a camera in his face and part four takes place in outer space. Ridiculous. But if there were only ever two Hellraiser movies, it might be a different story.

1987’s Hellraiser is a remarkable piece of low-budget filmmaking. First time director Clive Barker, working off of his own short story “The Hellbound Heart,” turned in one of the great pieces of neo-gothic terror, and introduced us to Pinhead. The following year, Hellbound: Hellraiser II took the story in new and more sinister directions, including into hell itself. It’s possible these two movies together are a perfect one-two punch of fear.

Robert Englund (you know, Freddy Krueger) said everyone in Hellraiser seemed like they were in a kind of “sublime pain,” which is a very apt description. After all, the movie’s working title was Sadomasochists from Beyond the Grave. Barker brings together disgusting and grotesque body horror, otherworldly nightmares, and deeply twisted sensuality; the witches brew works to a degree that none of the other big horror franchises of the time can. Despite Roger Ebert calling it “bankrupt of imagination,” Hellraiser is weirdly classy and rich in lore for how grotty and simple it is. 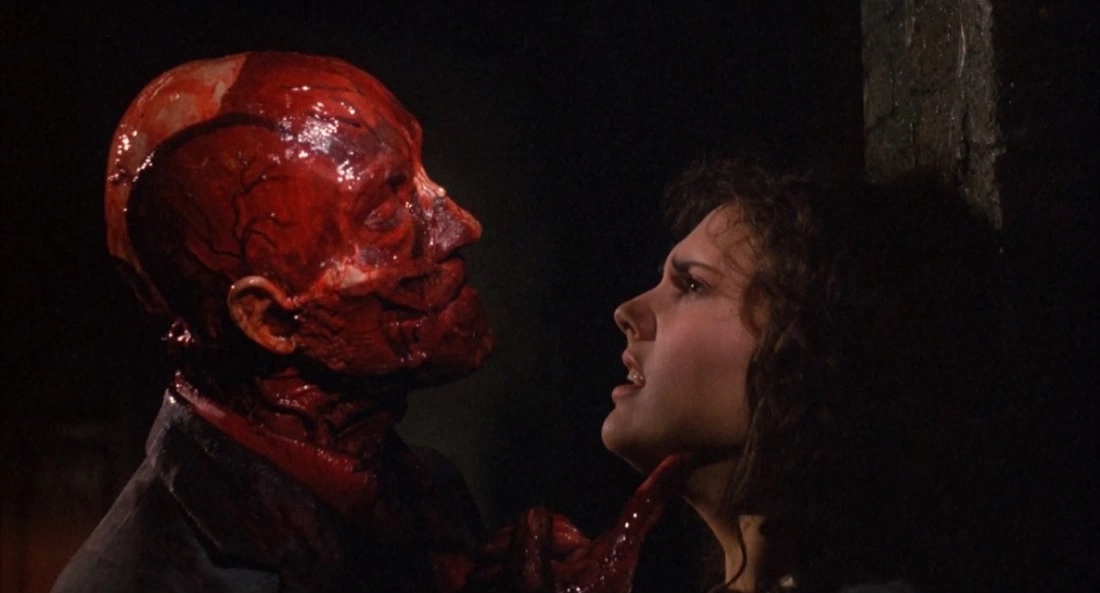 Hedonist Frank Cotton (Sean Chaptman) hunts down the fabled Lament Configuration, a puzzle box said to offer a solver the pinnacle of sensual experience. After solving it, Frank unleashes the Cenobites, creatures from another dimension who use pain and pleasure interchangeably. Frank is torn apart and sent to hell. Later, his older brother Larry (Andrew Robinson) moves into Frank’s house with his new wife Julia (Clare Higgins) and his 20-something daughter Kirsty (Ashley Laurence). Little does Larry know, Julia had an affair with Frank a week prior to the wedding and she’s pined for the dangerous man ever since. 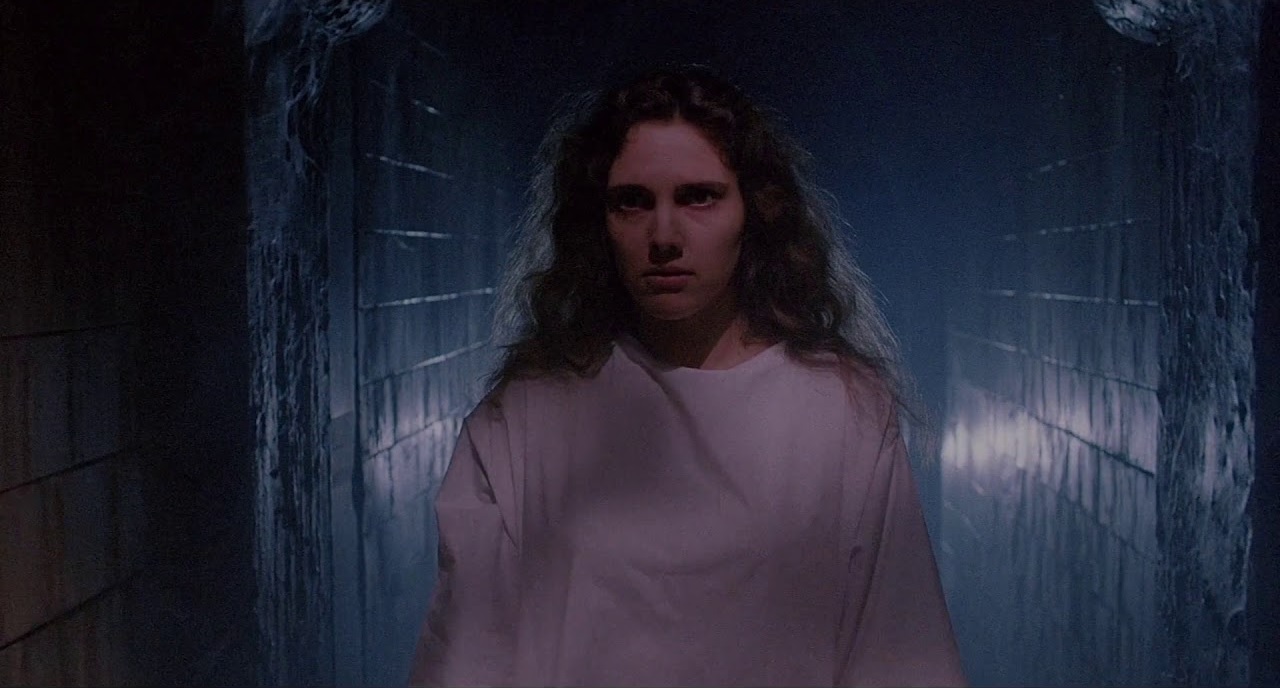 Eventually, Larry and Julia find the attic room where Frank died and Larry cuts his hand on a splinter of wood. The blood falls to the ground where it mixes with Frank’s residue (gross); to Julia’s horror and titillation, Frank springs from the floor, a skeleton with the bare remnants of sinew. In order to become whole again, Frank needs to devour the flesh of victims. Julia, therefore, must venture to seedy bars and pick up loserly drunks only to murder them for their sweet meat. The ultimate victim will be Larry; Frank plans to use his skin as a disguise. Only Kirsty realizes what’s going on and dares to solve the puzzle box herself in the hopes that whatever’s on the other side can suck Frank back to hell.

One of the very best things about Hellraiser is how most of it is a domestic drama. Larry Cotton is the everyman schlubb whose only crime is not being interesting. His new wife Julia is only with him for the stability and Kirsty knows it. There’s an icy rapport between the two women, heightened by all the, you know, murder. But all of this weird but relatively normal tension (despite a skinless Frank) lulls the audience until the Cenobites return. Their leader, Pinhead (Doug Bradley), commands such attention in his brief screentime, and delivers some of the best lines in horror. 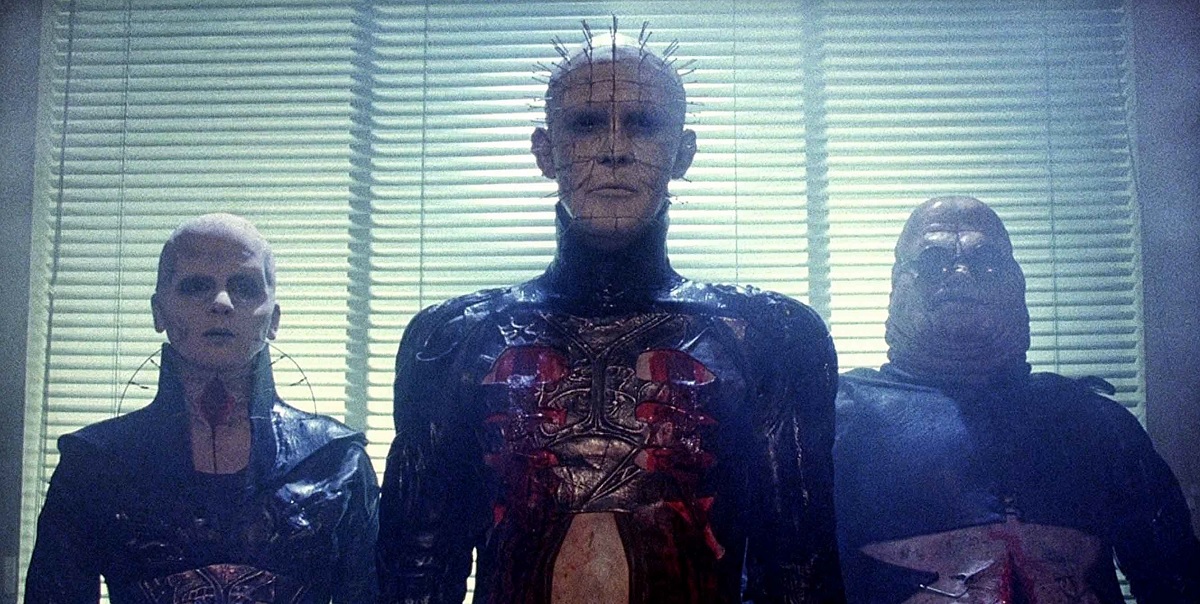 Hellraiser proved a massive hit for New World Pictures and launched Barker’s career in film. But New World wanted a sequel right away; Barker’s childhood friend Peter Atkins was hired to write the screenplay for Hellbound: Hellraiser II with new director Tony Randel at the helm. It’s in Hellbound that the legend of the Lament Configuration and the Cenobites grows exponentially. For pure cosmic horror, Hellbound might even eclipse the original.

The story picks up right after the ending of the first. Kirsty is in a psychiatric hospital and she tells Dr. Channard (Kenneth Cranham) and his assistant Dr. MacRae (William Hope) all about the Cenobites and Frank and Julia. She beseeches them to find the mattress upon which Julia died in part one and destroy it. Unfortunately for all involved, Channard is a hedonist who has studied historical reports of the Lament Configuration for decades. He takes the mattress to his own house where he urges a mental patient to cut himself on it, freeing Julia from hell.

While Channard brings more patients to Julia for her to devour for their flesh, Kirsty and Dr. MacRae attempt to stop them. A young patient named Tiffany (Imogen Boorman) is obsessed with puzzles and eventually solves the Lament Configuration, not summoning the Cenobites but opening a portal to their dimension. It’s here that we begin to learn about the labyrinthine hell world and the formless god of hell, the Leviathan. We also learn, through the movie’s prologue, that Cenobites were all once human, transformed and perverted by Leviathan for their curiosity into the carnal.

Hellbound certainly has more of a music video vibe to its visuals than the first movie, but it also offered some amazing ideas and gnarly creature and gore effects. The hell dimension, for example, is like a massive M.C. Escher painting and the individual corridors seem to go on forever. While some of the mystique of the Cenobite goes away, knowing more about the greater mythology engages the audience. And Channard makes for an excellent and detestable villain. He experiments on his patients for the sheer curiosity of it, and that’s before he becomes a Cenobite. Hedonism. Not great. 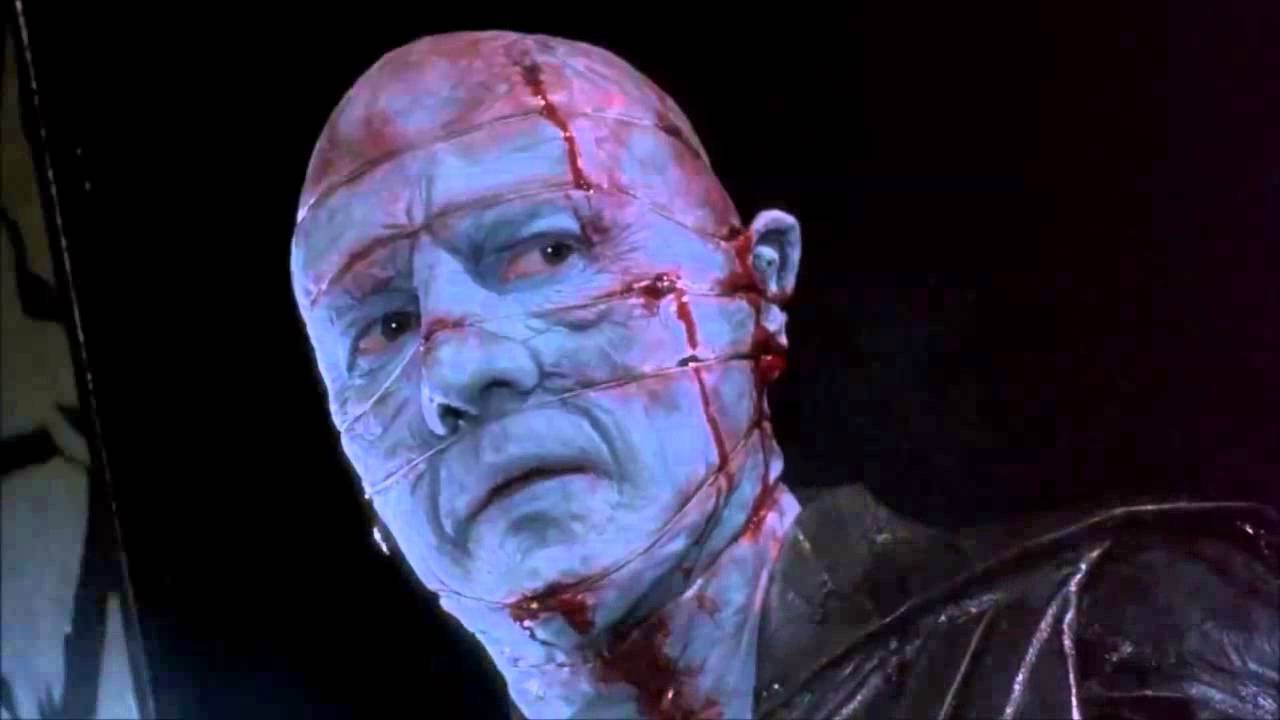 Every movie in the franchise after this would turn Pinhead into a supervillain. In the very next film, 1992’s Hellraiser III: Hell on Earth, Pinhead is basically just Freddy Krueger, spouting one-liners from beginning to end. But this lessens his impact. He’s not just some quippy, power-mad villain. In Hellraiser and Hellbound, he and the Cenobites are the minotaur at the center of the maze. Once you find them, it’s practically too late. And yes, Pinhead gets overtaken in Hellbound by the Channard Cenobite, but by that point his legacy is cemented. 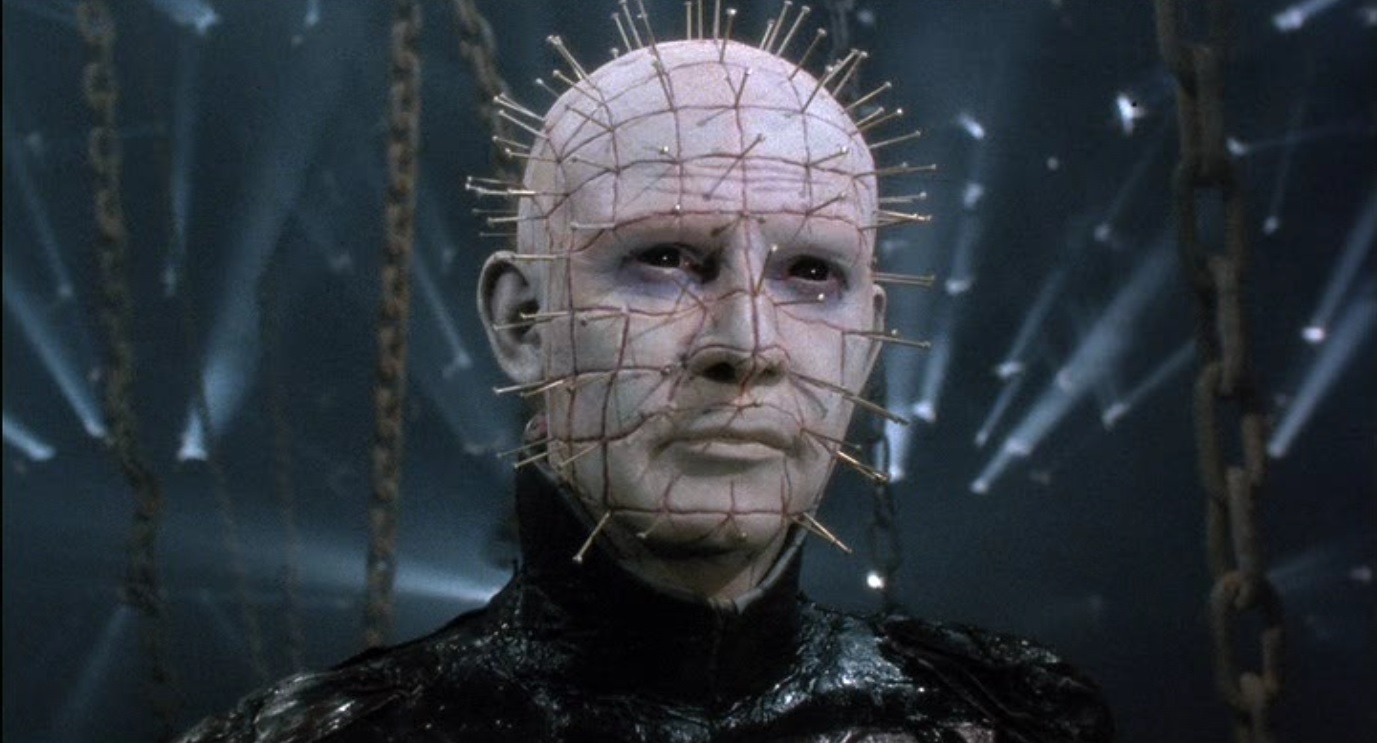 The first two Hellraiser movies offer different things to horror fans. The first is a foray into the taboo; the second an exercise in heightening stakes. For my money, I like what Hellbound is doing a little more. Its scope is much broader and more intriguing. But taken together, they tell a compelling story of a young woman trying to remain in the light while everything she knows falls into darkness. Ignore everything after and it’ll be a great night. 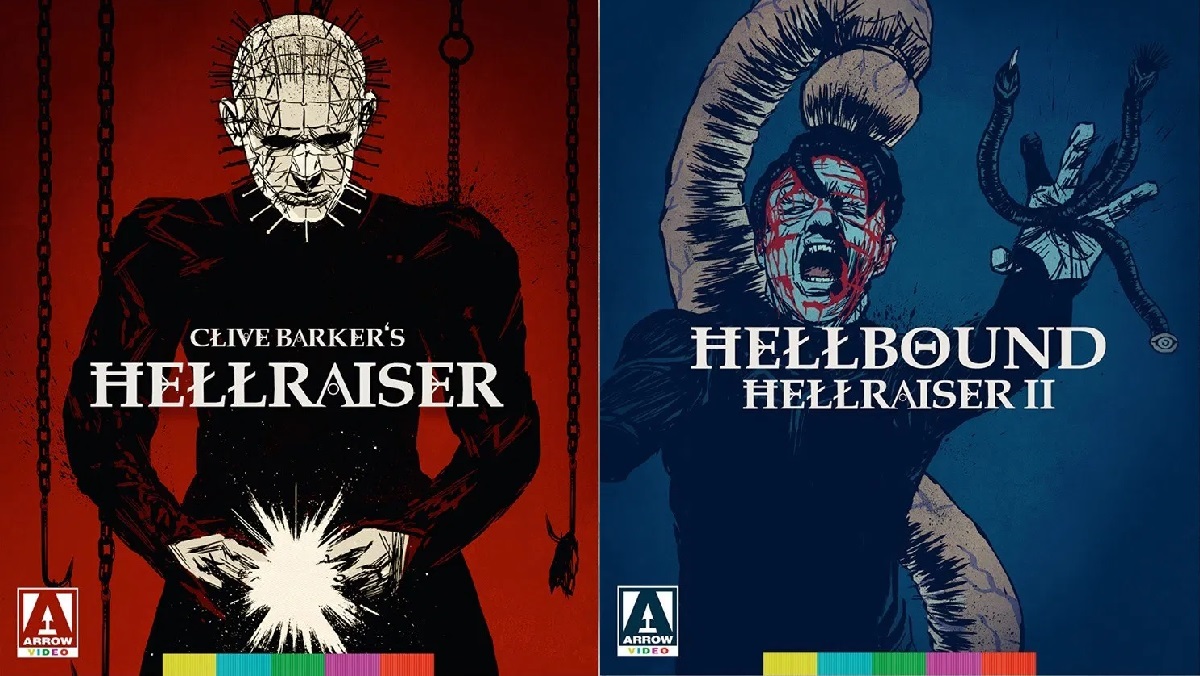 If you’ve never seen the first two Hellraiser movies or just want to see them again, I recommend picking up Arrow Video‘s new Blu-ray editions. Both come packed with extras and feature splendid video and audio transfers. Never before has depravity looked and sounded so good. And they’re worth watching any way you can; they have such sights to show you.