What You Need to Know About HAWKEYE'S Lucky the Dog - Nerdist

When Marvel announced the Hawkeye series for Disney+ , fans hoped the story would be, at least in part, based on one of its most popular comic stories: the 2012-2015 series by Matt Fraction and David Aja and artists including Annie Wu, Javier Pulido, Steve Lieber, Jesse Hamm, and Francesco Francavilla. Launched following the character’s breakout in Avengers, Hawkeye followed the very human adventures of Clint Barton, his protégé Kate Bishop (also known as Hawkeye), and their shared golden retriever companion, Lucky.

Despite the ongoing pandemic, Marvel is surging ahead with production for its Phase 4 slate. Hawkeye recently commenced filming in New York with stars Jeremy Renner and Hailee Steinfeld. And it’s not only the human actors fans have been excited to see in set photos. They’ve been overjoyed to spot a fluffy golden retriever who in real life is a four-year-old dog known as Jolt.

Unlike other superhero dogs like Lockjaw or Cosmo, Lucky has no special powers. He has no specific abilities. He’s not even an animal character who has a history from long ago. So why is Lucky such a beloved character in this comic, and why are Marvel fans so excited about a dog? To understand the love behind Lucky, you have to know a little backstory about this “goodest boy” first.

In addition to being a pizza-loving canine, Lucky is his own kind of star in the Hawkeye comics. He came into Clint’s life at the very beginning of issue #1. Then he was known as a guard dog named “Arrow.” Lucky was with the Tracksuit Mafia—the name of the mobster group that routinely butted heads with Clint and Kate throughout the series. Clint earned Arrow’s loyalty when he showed him some kindness by feeding him a slice of pizza. Arrow earned Clint’s loyalty in return when the pup defended Clint in a fight. That fight led to Arrow receiving grave injuries, but Clint took him to a veterinary hospital and saved his life.

Officially taking ownership of the dog after that, Clint decided that he could come up with something better to name him than Arrow. And thus, Lucky “the Pizza Dog” was born. 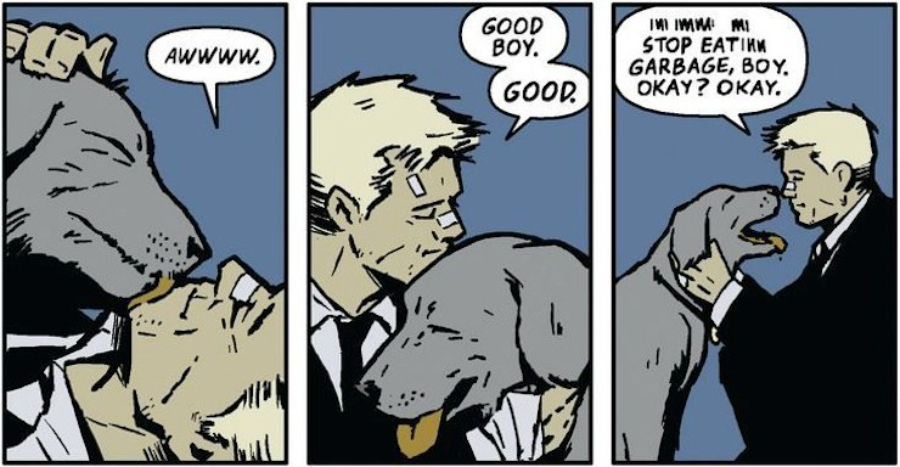 One-eyed, bent-eared, and all heart, Lucky became more than just a fun addition to the comic. He was an integral part of the overall story. He always helped Clint and Kate through rough patches. Sometimes he got them out of difficult situations, like any loyal companion. Ask any fan, and they’ll tell you that one of the best issues of the series is Hawkeye #11—an issue told entirely from Lucky’s point of view. It’s a true testament to the visual brilliance of main series artist David Aja.

We don’t know all the details of the Hawkeye show, or how closely it will follow the comics. After all, Clint’s life in Bed Stuy, Brooklyn is much different than the Avenger/family man we’ve gotten to know in the MCU. But we do know that we can expect Lucky to be a significant part of this show, and we’re psyched. It’s what we deserve.

And we’re not gonna lie. While the filming photos are great, the best photos are coming from Jolt’s Instagram account. His handlers have been posting there about his New York trip. And honestly, even with COVID restrictions, this dog seems to be having the most magical time. It’s the vibe we need after a long year.

Will Lucky end up as the Baby Yoda of Marvel? We’re willing to bet on it.