5-Minute Dungeon is billed as a chaotic, cooperative, real-time card game. You’re battling a clock to defeat a dungeon with a group of friends in under five minutes. It’s a simple concept with a strong hook, one strong enough to have already gathered 5,500 backers on Kickstarter. With only a few days to go this campaign is flying off the rails and if you want to get aboard, you better holler before it’s gone.

Funded in only six hours, 5-Minute Dungeon is not publisher Wiggles 3D’s first rodeo but it may just be their most successful. This game is finding its audience due to a beautiful presentation and wide appeal. It plays 2-5 players and will surely hit the table with its minuscule play time.

The pace of the game is frantic as players race against a live clock to slap down symbols on the table. You’re trying to beat challenges before you and bust down doors to progress through the cavern. There are no turns and no time to waste. You can change the number of players participating in between each dungeon so late arrivers on game night can hop right in. With 10 heroes to choose from, variety is present and everyone can grab a favorite. 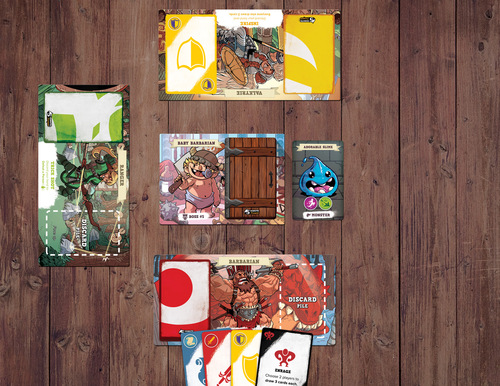 As you’re working your way through the dungeon and trouncing enemies, you eventually come upon a boss. After you defeat the dungeon boss (we have faith in you!), you progress to the next boss with increased difficulty. This continues until you tear your way through five dungeons and confront the final boss.

A light game intensified by increasing challenge and a furious real-time clock, 5-Minute Dungeon promises to bring the fun in a fast and furious manner.

If 5-Minute Dungeon sounds interesting then head on over to Kickstarter to check it out.


Already a backer for 5-Minute Dungeon? Are you a fan of fantasy dungeon crawl games? Let us know in the comments!


All media courtesy of Wiggles 3D