You Can Get a HARRY POTTER eBook for Free Right Now

If you somehow missed Harry Potter the first time around (or the second, or third, because the movies reignited interest and now we have cooler covers and so on and so forth), now’s your chance to make your way through the one that started it all. As we discovered thanks to  Mashable, the digital book app Libby, in partnership with close to 18,000 libraries throughout the U.S. and Canada, is lending out Harry Potter and the Sorcerer’s Stone free on demand. That means there’s no waiting period, no matter how many holds have been placed on the title.

Libby is accessible to anyone with a library card… myself included. So, being a devoted Potter fan—I didn’t get this Golden Snitch tattoo for nothing—who’s well overdue for a reread, I went ahead and logged into the app with my card number and PIN. That took me to the Libby homepage, where they’re smartly advertising the books. Clicking that link gets you to the Harry Potter and the Sorcerer’s Stone lending page.

Granted, it’s a little disappointing that only The Sorcerer’s Stone is available through this promotion, which marks 20 years since the series was released in America. Fortunately, the Libby hold system makes it easy to put in for the other books, all of which are available in a matter of weeks. (Unsurprisingly, the series’ strongest entry, Harry Potter and the Prisoner of Azkaban, had the longest wait through the New York Public Library system. But it’s worth it.) 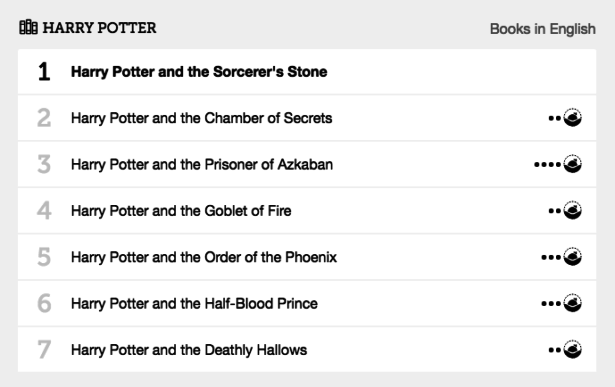 Downloads of The Sorcerer’s Stone are available through September 10. Once you borrow it, you’ll have it on hand through your browser or Kindle. Two weeks is more than long enough for something as bingeable as Harry Potter, so go forth and enjoy what’s bound to become one of your favorite series (if it isn’t already).